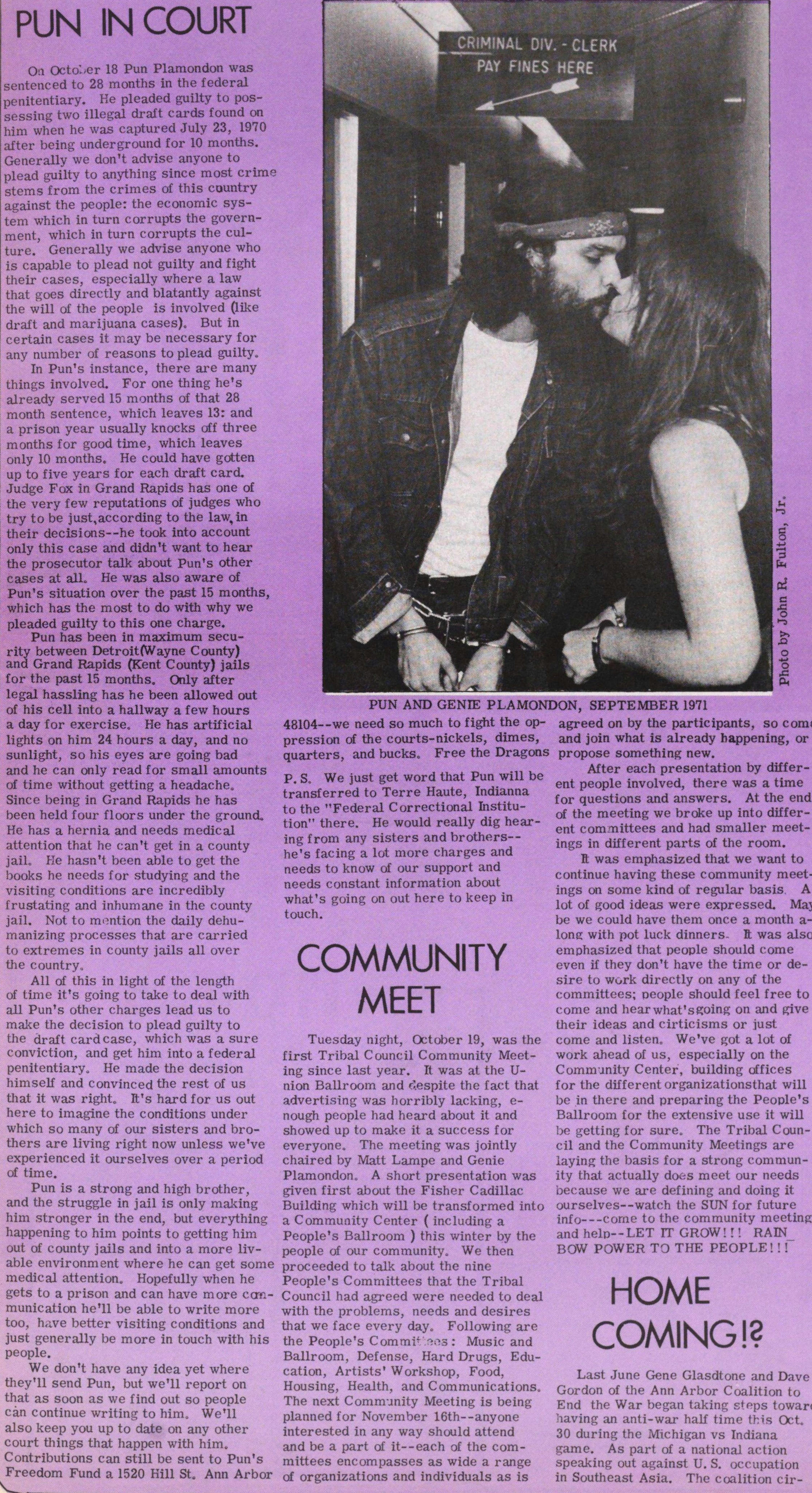 Ou October 18 Pun Plamondon was sentenced to 28 months in the federal penitentiary. He pleaded guilty to possessing two illegal draft cards found on him when he was captured July 23, 1970 after being underground for 10 months. Generally we don't advise anyone to plead guilty to anything since most crime stems from the crimes of this country against the people: the economic system which in turn corrupts the government, which in turn corrupts the culture. Generally we advise anyone who is capable to plead not guilty and fight their cases, especially where a law that goes directly and blatantly against the will of the people is involved (like draft and marijuana cases). But in certain cases it may be necessary for any number of reasons to plead guilty.

In Pun's instance, there are many things involved. For one thing he's already served 15 months of that 28 month sentence, which leaves 13: and a prison year usually knocks off three months for good time, which leaves only 10 months. He could have gotten up to five years for each draft card. Judge Fox in Grand Rapids has one of the very few reputations of judges who try to be just, according to the law, in their decisions--he took into account only this case and didn't want to hear the prosecutor talk about Pun's other cases at all. He was also aware of Pun's situation over the past 15 months, which has the most to do with why we pleaded guilty to this one charge.

Pun has been in maximum security between Detroit (Wayne County) and Grand Rapids (Kent County) jails for the past 15 months. Only after legal hassling has he been allowed out of his cell into a hallway a few hours a day for exercise. He has artificial lights on him 24 hours a day, and no sunlight, so his eyes are going bad and he can only read for small amounts of time without getting a headache. Since being in Grand Rapids he has been held four floors under the ground. He has a hernia and needs medical attention that he can 't get in a county jail. He hasn't been able to get the books he needs for studying and the visiting conditions are incredibly frustating and inhumane in the county jail. Not to mention the daily dehumanizing processes that are carried to extremes in county jails all over the country.

All of this in light of the length of time it's going to take to deal with all Pun's other charges lead us to make the decision to plead guilty to the draft card case, which was a sure conviction, and get him into a federal penitentiary. He made the decision himself and convinced the rest of us that it was right. It's hard for us out here to imagine the conditions under which so many of our sisters and brothers are living right now unless we've experienced it ourselves over a period of time.

Pun is a strong and high brother, and the struggle in jail is only making him stronger in the end, but everything happening to him points to getting him out of county jails and into a more livable environment where he can get some medical attention. Hopefully when he gets to a prison and can have more communication he'll be able to write more too, have better visiting conditions and just generally be more in touch with his people.

We don't have any idea yet where they'll send Pun, but we'll report on that as soon as we find out so people can continue writing to him. We'll also keep you up to date on any other court things that happen with him. Contributions can still be sent to Pun's Freedom Fund a 1520 Hill St. Ann Arbor 48104--we need so much to fight the oppression cf the courts-nickels, dimes, quarters, and bucks. Free the Dragons

P. S. We just get word that Pun will be transferred to Terre Haute, Indianna to the "Federal Correctional Institution" there. He would really dig hearing from any sisters and brothers-he's facing a lot more charges and needs to know of our support and needs constant information about what's going on out here to keep in touch.