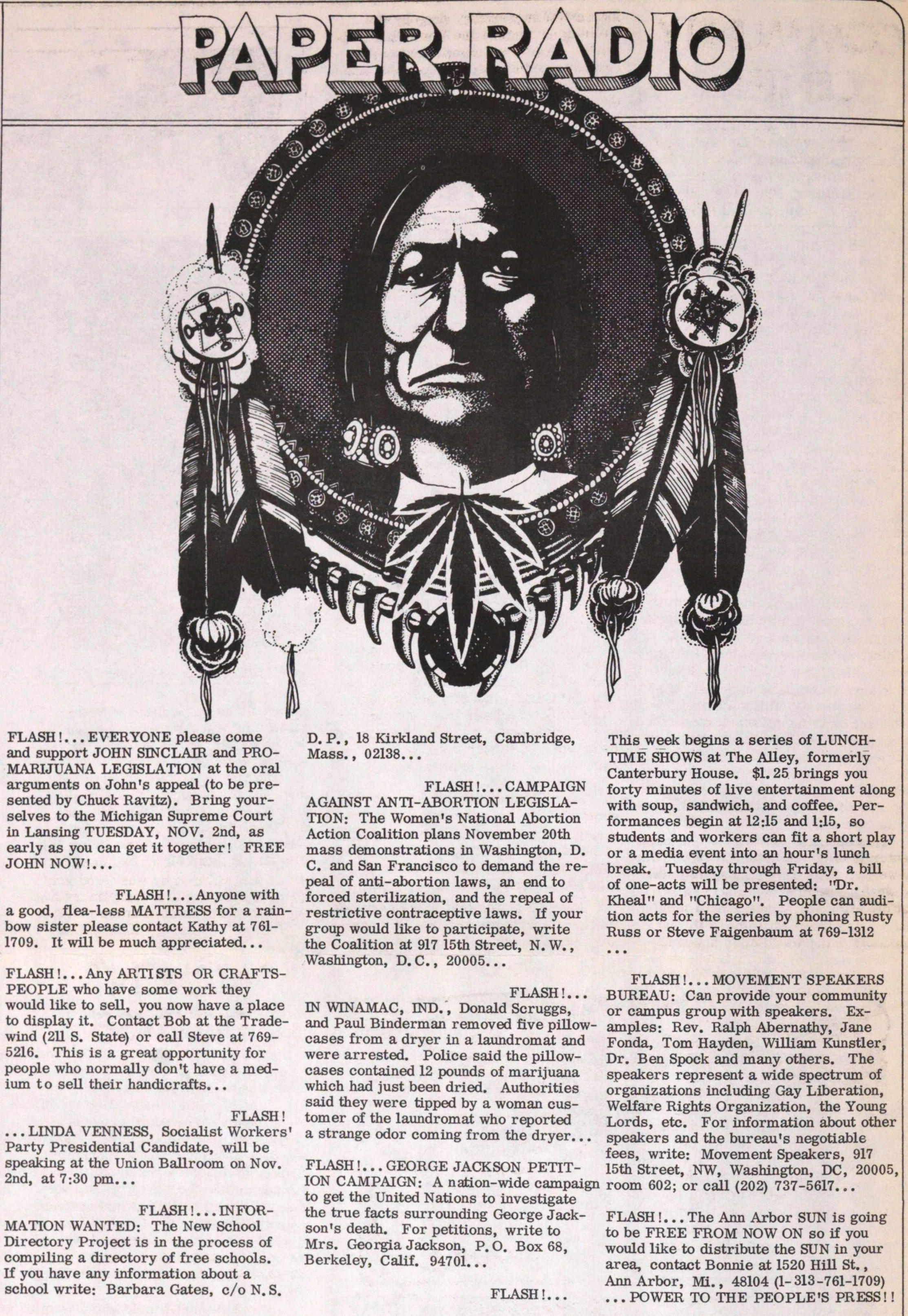 FLASH ! . . . EVERYONE please come and support JOHN SINCLAIR and PROMARIJUANA LEGISLATION at the oral arguments on John's appeal (to be presented by Chuck Ravltz). Bring yourselves to the Michigan Supreme Court in Lansing TUESDAY, NOV. 2nd, as early as you can get it together ! FREE JOHN NOW!... FLASH ! . . . Anyone with a good, flea-less MATTRESS for a rainbow sister please contact Kathy at 7611709. It will be much appreciated. . . FLASH ! . . . Any ARTISTS OR CRAFTSPEOPLE who have some work they would like to sell, you now have a place to display it. Contact Bob at the Tradewind (211 S. State) or call Steve at 7695216. This is a great opportunity for people who normally don 't have a medium to sell their handicrafts. . . FLASH! . . . LINDA VENNESS, Socialist Workers' Party Presidential Candidate, will be speaking at the Union Ballroom on Nov. 2nd, at 7:30 pm. .. FLASH ! . . . INFORMATION WANTED: The New School Directory Project is in the process of compiling a directory of free schools. If you have any information about a school write: Barbara Gates, co N. S. D. P. , 18 Kirkland Street, Cambridge, Mass., 02138... FLASH ...CAMPAIGN AGAINST ANTI-ABORTION LEGISLATION: The Women's National Abortion Action Coalition plans November 20th mass demonstrations in Washington, D. C. and San Francisco to demand the repeal of anti-abortion laws, an end to forced sterilization, and the repeal of restrictive contraceptive laws. If your group would like to participate, write the Coalition at 917 15th Street, N. W. , Washington, D. C. , 20005. . . FLASH!... IN WINAMAC, IND. , Donald Scruggs, and Paul Binderman removed five pillowcases from a dryer in a laundromat and were arrested. Police said the pillowcases contained 12 pounds of marijuana which had just been dried. Authorities said they were tipped by a woman customer of the laundromat who reported a strange odor coming from the dryer. . . FLASH ! . . . GEORGE JACKSON PETITION CAMPAIGN: A nation-wide campaign to get the United Nations to investigate the true facts surrounding George Jackson's death. For petitions, write to Mrs. Georgia Jackson, P. O. Box 68, Berkeley, Calif. 94701... FLASH!... This week begins a series of LUNCHTIME SHOWS at The Alley, formerly Canterbury House. $1. 25 brlngs you forty minutes of live entertainment along with soup, sandwich, and coffee. Performances begin at 12:15 and 1:15, so students and workers can fit a short play or a media event into an hour's lunch break. Tuesday through Friday, a bilí of one-acts will be presented: "Dr. Kheal" and "Chicago". People can audition acts for the series by phoning Rusty Russ or Steve Faigenbaum at 769-1312 FLASH ! . . . MOVEMENT SPEAKERS BUREAU: Can provide your community or campus group with speakers. Examples: Rev. Ralph Abernathy, Jane Fonda, Torn Hayden, William Kunstier, Dr. Ben Spock and many others. The speakers represent a wide spectrum of organizations including Gay Liberation, Welfare Rights Organization, the Young Lords, etc. For information about other speakers and the bureau's negotiable fees, write: Movement Speakers, 917 15th Street, NW, Washington, DC, 20005, room 602; or call (202) 737-5617... FLASH ! . . . The Ann Arbor SUN is going to be FREE FROM NOW ON so if you would like to distribute the SUN in your area, contact Bonnie at 1520 Hill St. , Ann Arbor, Mi., 48104(1-313-761-1709) . . . POWER TO THE PEOPLE'S PRESS ! !