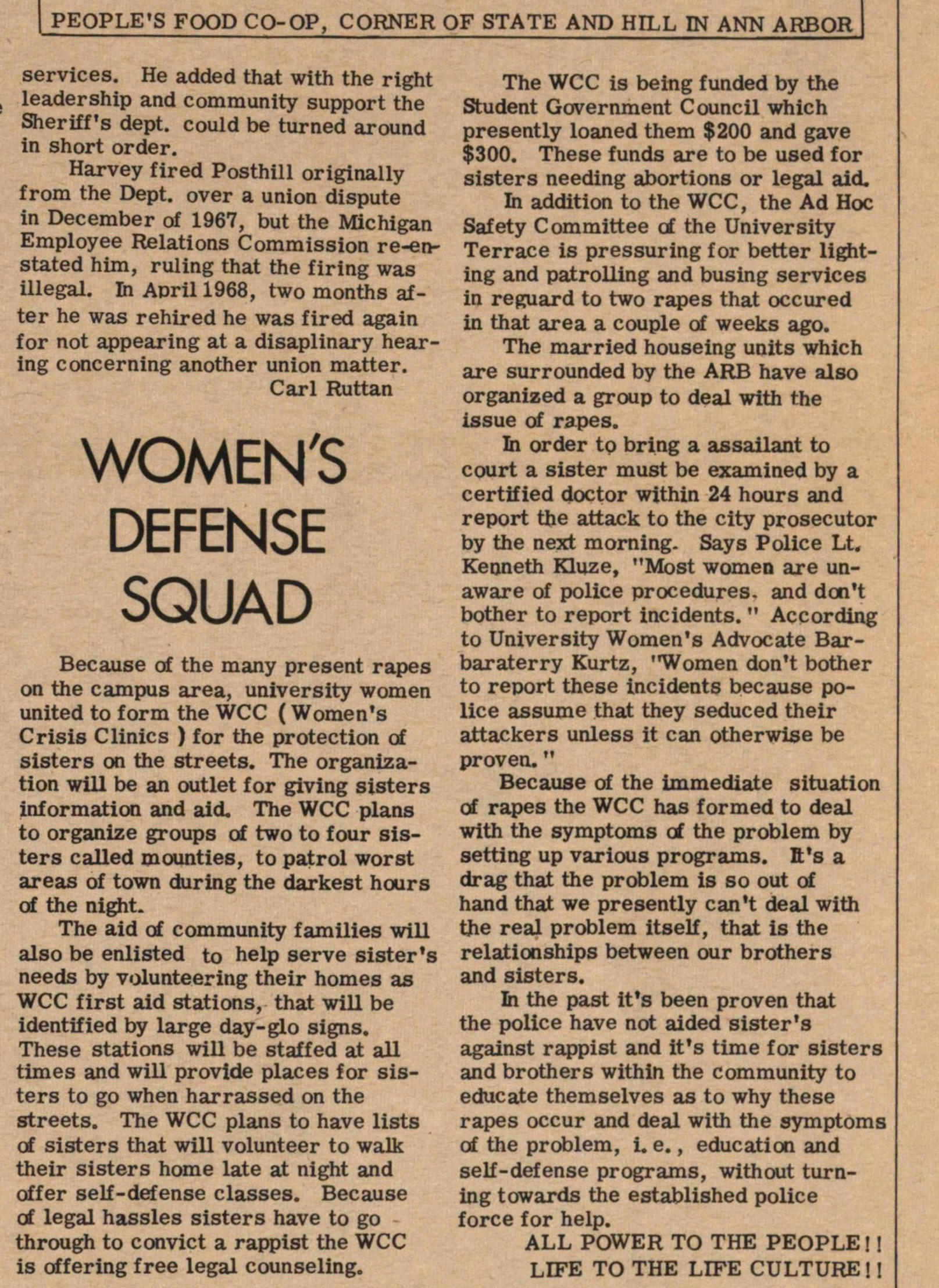 Because of the many present rapes on the campus area, university women united to form the WCC ( Women's Crisis Clinics ) for the protection of sisters on the streets. The organization will be an outlet for giving sisters information and aid. The WCC plans to organize groups of two to four sisters called mounties, to patrol worst areas of town during the darkest hours of the night. The aid of community families will also be enlisted to help serve sister's needs by volunteering their homes as WCC first aid stations, that will be identified by large day-glo signs. These stations will be staffed at all times and will provide places for sisters to go when harassed on the streets. The WCC plans to have lists of sisters that will volunteer to walk their sisters home late at night and offer self-defense classes. Because of legal hassles sisters have to go through to convict a rappist the WCC is offering free legal counseling. The WCC is being funded by the Student Government Council which presently loaned them $200 and gave $300. These funds are to be used for sisters needing abortions or legal aid. In addition to the WCC, the Ad Hoc Safety Coramittee of the University Terrace is pressuring for better lighting and patrolling and busing services in reguard to two rapes that occured in that area a couple of weeks ago. The married houseing units which are surrounded by the ARB have also organized a group to deal with the issue of rapes. In order to bring a assailant to court a sister must be examined by a certified doctor within 24 hours and report the attack to the city prosecutor by the next morning. Says Police Lt. Kenneth Kluze, "Most women are unaware of pólice procedures, and don't bother to report incidents. " According to University Women's Advocate Barbaraterry Kurtz, "Women don't bother to report these incidents because police assume that they seduced their attackers unless it can otherwise be proven. " Because of the immediate situation of rapes the WCC has formed to deal with the symptoms of the problem by setting up various programs. S's a drag that the problem is so out of hand that we presently can 't deal with the real problem itself , that is the relationships between our brothers and sisters. In the past it's been proven that the police have not aided sister's against rappist and it's time for sisters and brothers within the community to educate themselves as to why these rapes occur and deal with the symptoms of the problem, i. e. , education and self-defense programs, without turning towards the established police force for help. ALL POWER TO THE PEOPLE ! ! LIFE TO THE LIFE CULTURE ! !