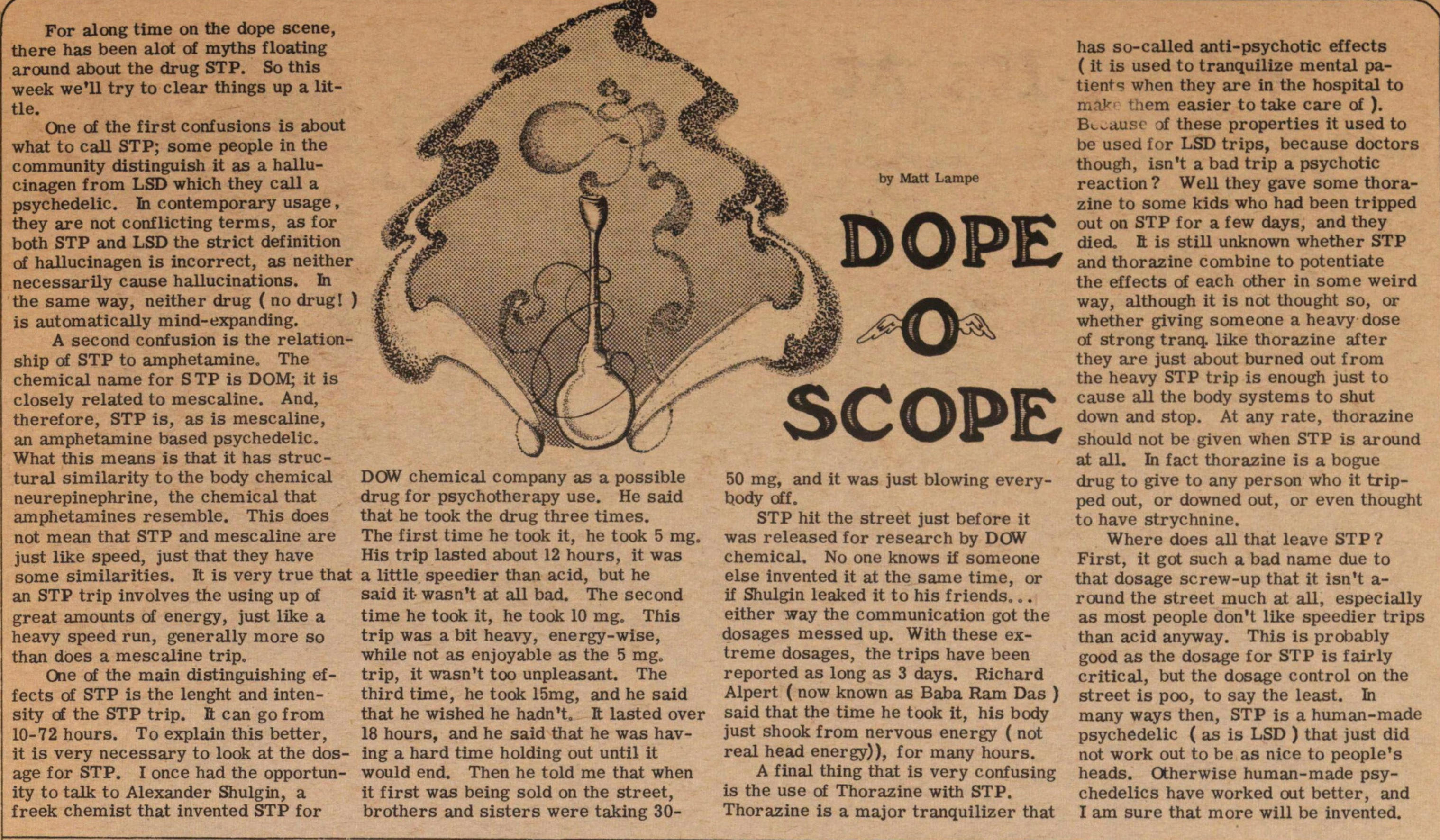 For along time on the dope scene, there has been alot of myths floating around about the drug STP. So this week we'll try to clear things up a little.

One of the first confusions is about what to call STP; some people in the community distinguish it as a hallucinagen from LSD which they call a psychedelic. In contemporary usage , they are not conflicting terms, as for both STP and LSD the strict definition of hallucinagen is incorrect, as neither necessarily cause hallucinations. In the same way, neither drug ( no drug! ) is automatically mind-expanding.

A second confusion is the relationship of STP to amphetamine. The Chemical name for STP is DOM; it is closely related to mescaline. And, therefore, STP is, as is mescaline, an amphetamine based psychedelic. What this means is that it has structural similarity to the body chemical neurepinephrine, the chemical that amphetamines resemble. This does not mean that STP and mescaline are just like speed, just that they have some similarities. It is very true that an STP trip involves the using up of great amounts of energy, just like a heavy speed run, generally more so than does a mescaline trip.

One of the main distinguishing effects of STP is the lenght and intensity of the STP trip. ft can go from 10-72 hours. To explain this better, it is very necessary to look at the dosage for STP. I once had the opportunity to talk to Alexander Shulgin, a f reek chemist that invented STP for DOW chemical company as a possible drug for psychotherapy use. He said that he took the drug three times.

The first time he took it, he took 5 mg. His trip lasted about 12 hours, it was a little speedier than acid, but he said it wasn't at all bad. The second time he took it, he took 10 mg. This trip was a bit heavy, energy-wise, while not as enjoyable as the 5 mg. trip, it wasn't too unpleasant. The third time, he took 15 mg, and he said that he wished he hadn't. It lasted over 18 hours, and he said that he was having a hard time holding out until it would end. Then he told me that when it first was being sold on the street, brothers and sisters were taking 30-50 mg, and it was just blowing everybody off.

STP hit the street just before it was released for research by DOW chemical. No one knows if someone else invented it at the same time, or if Shulgin leaked it to his friends. . . either way the communication got the dosages messed up. With these extreme dosages, the trips have been reported as long as 3 days. Richard Alpert ( now known as Baba Ram Das ) said that the time he took it, his body just shook from nervous energy ( not real head energy)), for many hours.

A final thing that is very confusing is the use of Thorazine with STP. Thorazine is a major tranquilizer that has so-called anti-psychotic effects ( it is used to tranquilize mental patients when they are in the hospital to make it easier to take care of ).

Because of these properties it used to be used for LSD trips, because doctors though, isn't a bad trip a psychotic reaction ? Well they gave some thorazine to some kids who had been tripped out on STP for a few days, and they died.

It is still unknown whether STP and Thorazine combine to potentiate the effects of each other in some weird way, although it is not thought so, or whether giving someone a heavy dose of strong tranq. like Thorazine after they are just about burned out from the heavy STP trip is enough just to cause all the body systems to shut down and stop.

At any rate, Thorazine should not be given when STP is around at all. In fact Thorazine is a bogue drug to give to any person who it tripped out, or downed out, or even thought to have strychnine.

Where does all that leave STP ?

First, it got such a bad name due to that dosage screw-up that it isn't around the street much at all, especially as most people don't like speedier trips than acid anyway.

This is probably good as the dosage for STP is fairly critical, but the dosage control on the street is poo, to say the least.

In many ways then, STP is a human-made psychedelic ( as is LSD ) that just did not work out to be as nice to people's heads.

Otherwise human-made psychedelics have worked out better, and I am sure that more will be invented.