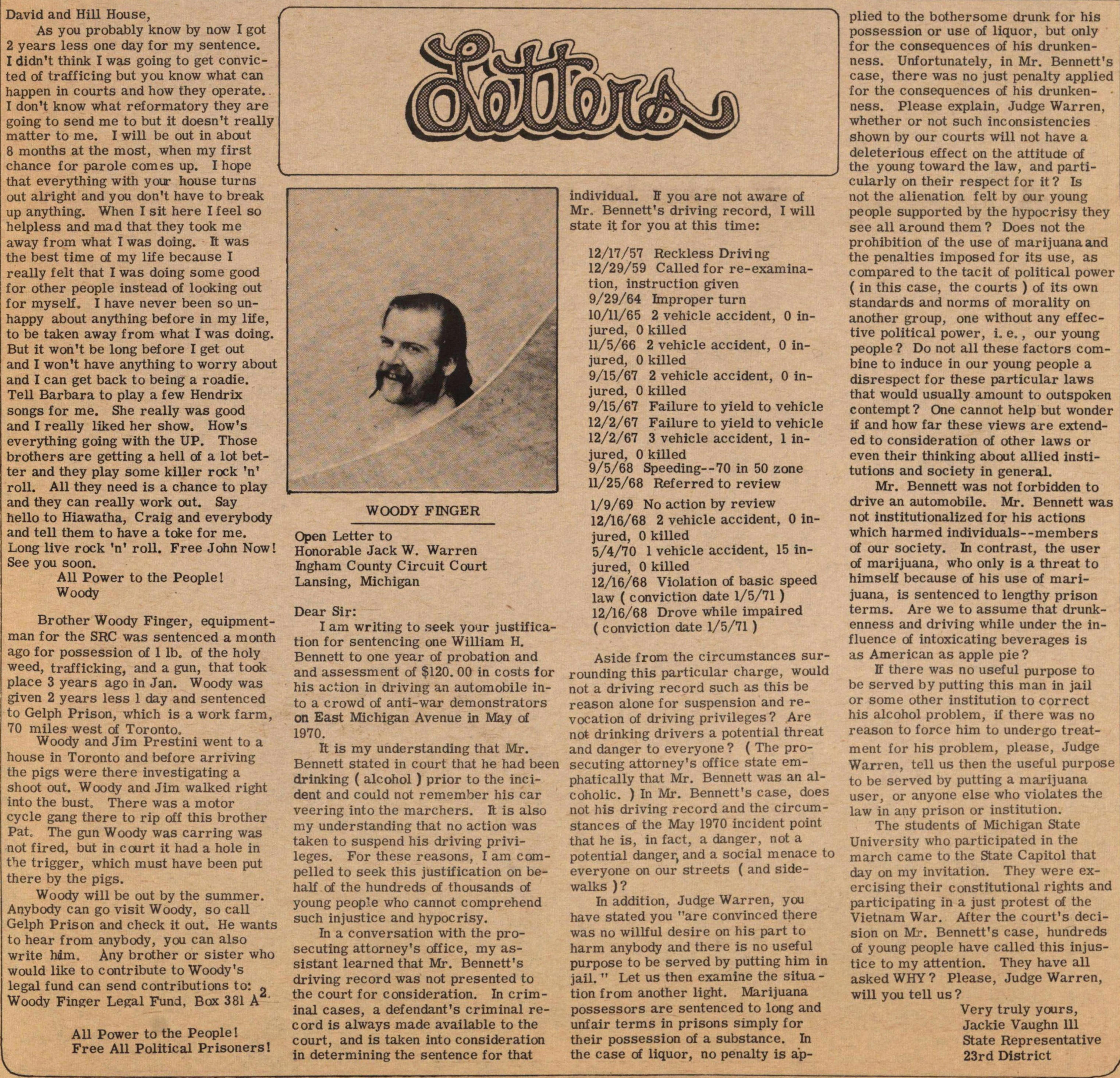 As you probably know by now I got 2 years less one day for my sentence. I didn't think I was going to get convicted of trafficing but you know what can happen in courts and how they operate. I don't know what reformatory they are going to send me to but it doesn't really matter to me.

I will be out in about 8 months at the most, when my first chance for parole comes up. I hope that everything with your house turns out alright and you don't have to break up anything. When I sit here I feel so helpless and mad that they took me away from what I was doing. It was the best time of my life because I really felt that I was doing some good for other people instead of looking out for myself.

I have never been so unhappy about anything before in my life, to be taken away from what I was doing. But it won't be long before I get out and I won't have anything to worry about and I can get back to being a roadie. Teil Barbara to play a few Hendrix songs for me. She really was good and I really liked her show. How's everything going with the UP. Those brothers are getting a hell of a lot better and they play some killer rock 'n' roll. All they need is a chance to play and they can really work out.

Say hello to Hiawatha, Craig and everybody and tell them to have a toke for me.

All Power to the People !

Brother Woody Finger, equipment man for the SRC was sentenced a month ago for possession of 1 lb. of the holy weed, trafficking, and a gun, that took place 3 years ago in Jan. Woody was given 2 years less 1 day and sentenced to Gelph Prison, which is a work farm, 70 miles west of Toronto.

Woody and Jim Prestini went to a house in Toronto and before arriving the pigs were there investigating a shoot out. Woody and Jim walked right into the bust. There was a motor cycle gang there to rip off this brother Pat. The gun Woody was carrying was not fired, but in court it had a hole in the trigger, which must have been put there by the pigs.

Woody will be out by the summer. Anybody can go visit Woody, so call Gelph Prison and check it out. He wants to hear from anybody, you can also write him.

Any brother or sister who would like to contribute to Woody's legal fund can send contributions to: Woody Finger Legal Fund, Box 381

All Power to the People !

Dear Sir: I am writing to seek your justification for sentencing one William H. Bennett to one year of probation and and assessment of $120. 00 in costs for his action in driving an automobile into a crowd of anti-war demonstrators on East Michigan Avenue in May of 1970.

It is my understanding that Mr. Bennett stated in court that he had been drinking ( alcohol ) prior to the incident and could not remember his car veering into the marchers.

It is also my understanding that no action was taken to suspend his driving privileges.

For these reasons, I am compelled to seek this justification on behalf of the hundreds of thousands of young people who cannot comprehend such injustice and hypocrisy.

In a conversation with the prosecuting attorney's office, my assistant learned that Mr. Bennett's driving record was not presented to the court for consideration. In criminal cases, a defendant's criminal record is always made available to the court, and is taken into consideration in determining the sentence for that individual. If you are not aware of Mr. Bennett's driving record, I will state it for you at this time:

12/29/59 Called for re-examination, instruction given

Aside from the circumstances surrounding this particular charge, would not a driving record such as this be reason alone for suspension and revocation of driving privileges? Are not drinking drivers a potential threat and danger to everyone ? ( The prosecuting attorney's office state emphatically that Mr. Bennett was an alcoholic.) In Mr. Bennett's case, does not his driving record and the circumstances of the May 1970 incident point that he is, in fact, a danger, not a potential danger, and a social menace to everyone on our streets ( and sidewalks ) ?

In addition, Judge Warren, you have stated you "are convinced there was no willful desire on his part to harm anybody and there is no useful purpose to be served by putting him in jail.

" Let us then examine the situation from another light.

Marijuana possessors are sentenced to long and unfair terms in prisons simply for their possession of a substance.

In the case of liquor, no penalty is plied to the bothersome drunk for his possession or use of liquor, but only for the consequences of his drunkenness.

Unfortunately, in Mr. Bennett's case, there was no just penalty applied for the consequences of his drunkenness. Please explain, Judge Warren, whether or not such inconsistencies shown by our courts will not have a deleterious effect on the attitude of the young toward the law, and particularly on their respect for it ? Is not the alienation felt by our young people supported by the hypocrisy they see all around them ? Does not the prohibition of the use of marijuana and the penalties imposed for its use, as compared to the tacit of political power ( in this case, the courts ) of its own standards and norms of morality on another group, one without any effective political power, i. e. , our young people ?

Do not all these factors combine to induce in our young people a disrespect for these particular laws that would usually amount to outspoken contempt? One cannot help but wonder if and how far these views are extended to consideration of other laws or even their thinking about allied institutions and society in general.

Mr. Bennett was not forbidden to drive an automobile. Mr. Bennett was not institutionalized for his actions which harmed -members of our society. In contrast, the user of marijuana, who only is a threat to himself because of his use of marijuana, is sentenced to lengthy prison terms. Are we to assume that drunkenness and driving while under the influence of intoxicating beverages is as American as apple pie ?

If there was no useful purpose to be served by putting this man in jail or some other institution to correct his alcohol problem, if there was no reason to f ore e him to under go treatment for his problem, please, Judge Warren, tell us then the useful purpose to be served by putting a marijuana user, or anyone else who violates the law in any prison or institution.

The students of Michigan State University who participated in the march came to the State Capitol that day on my invitation. They were exercising their constitutional rights and participating in a just protest of the Vietnam War.

After the court's decision on Mr. Bennett's case, hundreds of young people have called this injustice to my attention. They have all asked WHY ? Please, Judge Warren, will you tell us ?