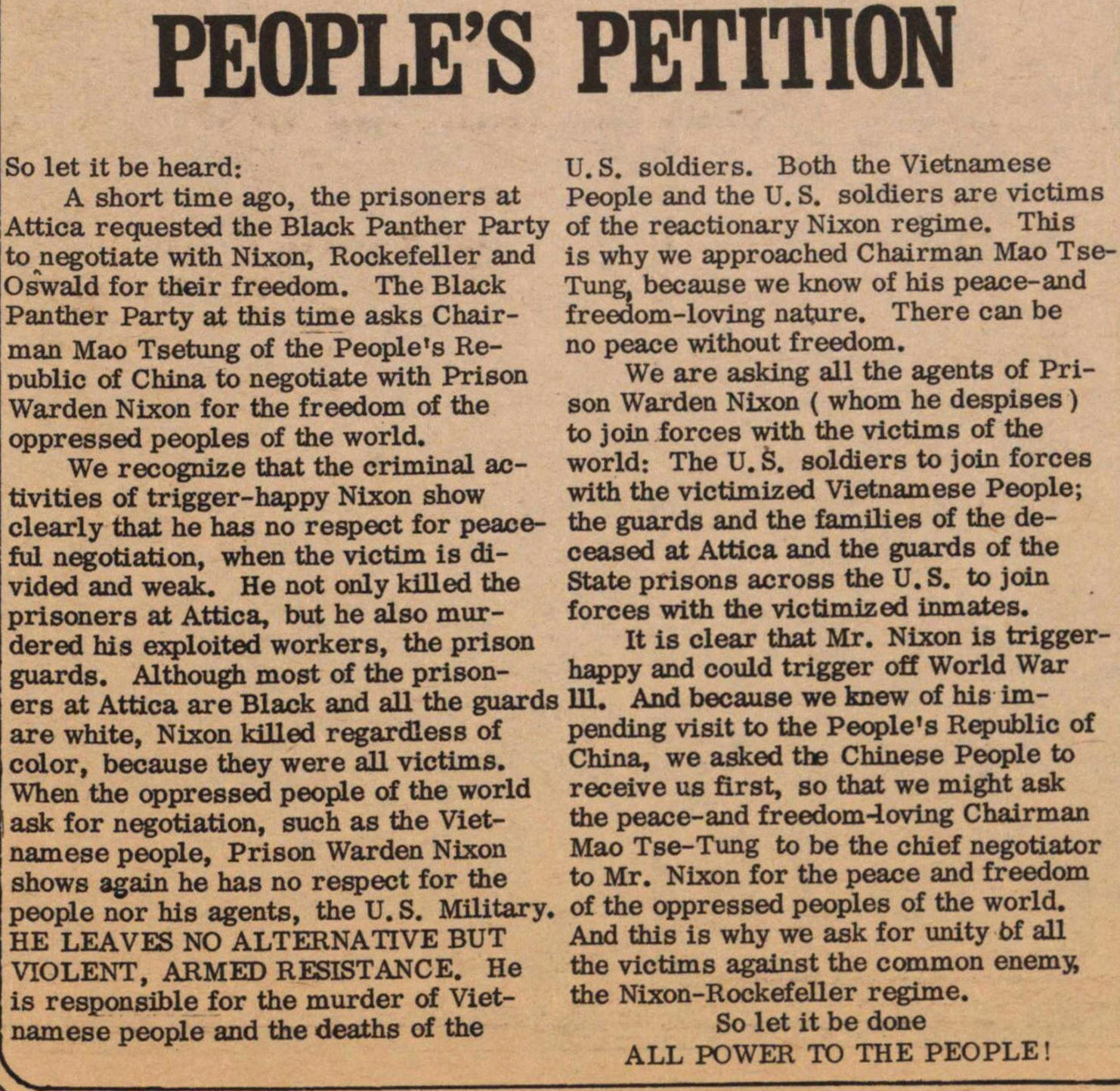 So let it be heard:
A short time ago, the prisoners at Attica requested the Black Panther Party to negotiate with Nixon, Rockefeller and Oswald for their freedom. The Black Panther Party at this time asks Chairman Mao Tsetung of the People's Republic of China to negotiate with Prison Warden Nixon for the freedom of the oppressed peoples of the world.

We recognize that the criminal activities of trigger-happy Nixon show clearly that he has no respect for peaceful negotiation, when the victim is divided and weak. He not only killed the prisoners at Attica, but he also murdered his exploited workers, the prison guards. Although most of the prisoners at Attica are Black and all the guards are white, Nixon killed regardless of color, because they were all victims. When the oppressed people of the world ask for negotiation, such as the Vietnamese people, Prison Warden Nixon shows again he has no respect for the people nor his agents, the U. S. Military. HE LEAVES NO ALTERNATIVE BUT VIOLENT, ARMED RESISTANCE. He is responsible for the murder of Vietnamese people and the deaths of the U. S. soldiers. Both the Vietnamese People and the U. S. soldiers are victims of the reactionary Nixon regime. This is why we approached Chairman Mao Tsetung, because we know of his peace-and freedom-loving nature. There can be no peace without freedom.

We are asking all the agents of Prison Warden Nixon (whom he despises ) to join forces wlth the victims of the world: The U. S. soldiers to join forces wlth the victimized Vietnamese People; the guards and the families of the deceased at Attica and the guards of the State prisons across the U. S. to join forces with the victimized inmates. It is clear that Mr. Nixon is trigger-happy and could trigger off World War III. And because we knew of his impending visit to the People's Republic of China, we asked the Chinese People to receive us first, so that we might ask the peace-and freedom-loving Chairman Mao Tsetung to be the chief negotiator to Mr. Nixon for the peace and freedom of the oppressed peoples of the world. And this is why we ask for unity of all the victims against the common enemy; the Nixon-Rockefeller regime. So let it be done ALL POWER TO THE PEOPLE!