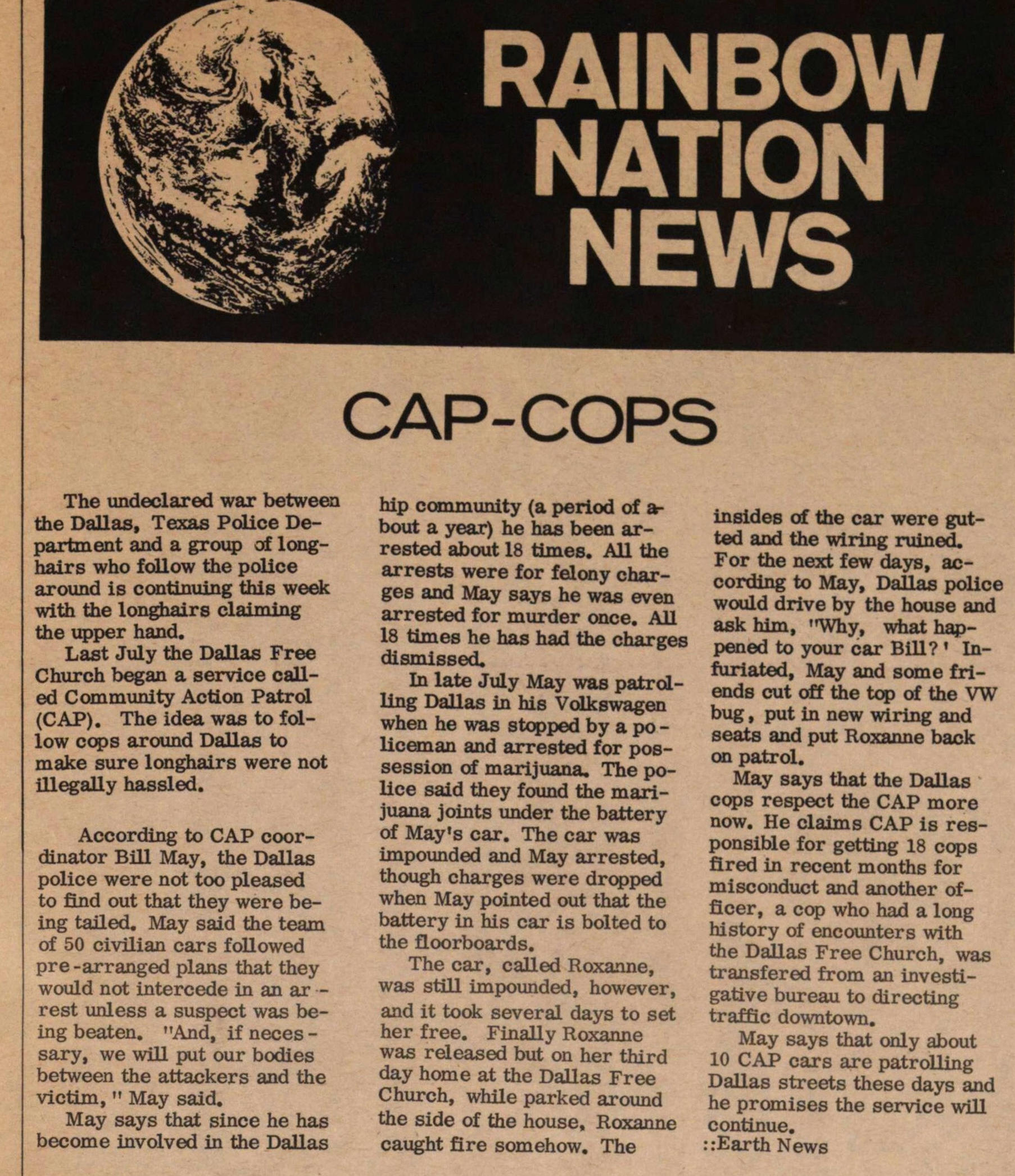 The undeclared war between the Dallas, Texas Police Department and a group of longhairs who follow the police around is continuing this week with the longhairs claiming the upper hand.

Last July the Dallas Free Church began a service called Community Action Patrol (CAP). The idea was to follow cops around Dallas to make sure longhairs were not illegally hassled.

According to CAP coördinator Bill May, the Dallas police were not too pleased to find out that they were being tailed. May said the team of 50 civilian cars followed pre-arranged plans that they would not intercede in an arrest unless a suspect was being beaten. "And, if necessary, we will put our bodies between the attackers and the victim," May said.

May says that since he has become involved in the Dallas hip community (a period of about a year) he has been arrested about 18 times. All the arrests were for felony charges and May says he was even arrested for murder once. All 18 times he has had the charges dismissed.

In late July, May was patrolling Dallas in his Volkswagen when he was stopped by a policeman and arrested for possession of marijuana. The police said they found the marijuana joints under the battery of May's car. The car was impounded and May arrested, though charges were dropped when May pointed out that the battery in his car is bolted to the floorboards. The car, called Roxanne, was still impounded, however, and it took several days to set her free. Finally Roxanne was released but on her third day home at the Dallas Free Church, while parked around the side of the house, Roxanne caught fire somehow. The insides of the car were gutted and the wiring ruined. For the next few days, according to May, Dallas police would drive by the house and ask him, "Why, what happened to your car Bill? ' Infuriated, May and some friends cut off the top of the VW bug, put in new wiring and seats and put Roxanne back on patrol.

May says that the Dallas cops respect the CAP more now. He claims CAP is responsible for getting 18 cops fired in recent months for misconduct and another officer, a cop who had a long history of encounters with the Dallas Free Church, was transferred from an investigative bureau to directing traffic downtown.

May says that only about 10 CAP cars are patrolling Dallas streets these days and he promises the service will continue.