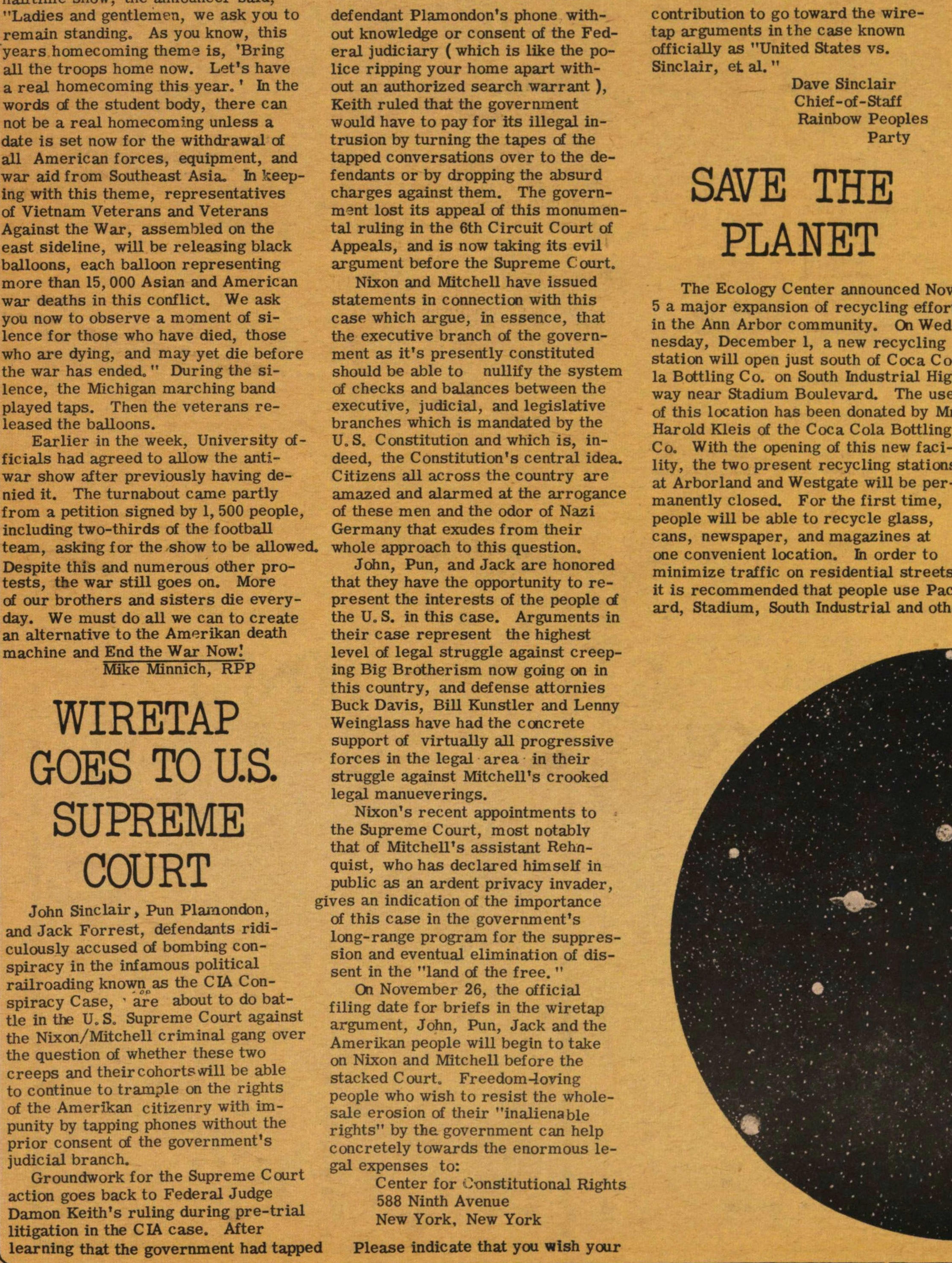 John Sinclair, Pun Plaraondon, and Jack Forrest, defendants ridiculously accused of bombing conspiracy in the infamous political railroading known as the CIA Conspiracy Case, are about to do battle in the IL S. Supreme Court against the NixonMitchell criminal gang over the question of whether these two creeps and theircohortswill be able to continue to trample on the rights of the Amerikan citizenry with impunity by tapping phones without the prior consent of the government's judicial branch. Groundwork for the Supreme Court action goes back to Federal Judge Damon Keith's ruling during pre-trial litigation in the CIA case. Af ter learning that the government had tapped defendant Plamondon's phone without knowledge or consent of the Federal judiciary ( which is like the police ripping your home apart without an authorized search warrant ), Keith ruled that the government would have to pay f or its illegal intrusión by turning the tapes af the tapped conversations over to the defendants or by dropping the absurd charges against them. The government lost its appeal of this monumental ruling in the 6th Circuit Court of Appeals, and is now taking its evil argument bef ore the Supreme Court. Nixon and Mitchell have issued statements in connection with this case which argue, in essence, that the executive branch of the government as it's presently constituted should be able to nullify the system of checks and balances between the executive, judicial, and legislative branches which is mandated by the U. S. C onstitution and which is, indeed, the C onstitution 's central idea. Citizens all across the country are amazed and alarmed at the arrogance of these men and the odor of Nazi Germany that exudes from their whole approach to this question. John, Pun, and Jack are honored that they have the opportunity to represent the interests of the people of the U. S. in this case. Arguments in their case represent the highest level of legal struggle against creeping Big Brotherism now going on in this country, and defense attornies Buck Davis, Bill Kunstier and Lenny Weinglass have had the concrete support of virtually all progressive f orces in the legal área in their struggle against Mitchell's crooked legal manueverings. Nixon's recent appointments to the Supreme Court, most notablv that of Mitchell's assistant Rehnquist, who has declared himself in public as an ardent privacy invader, gives an indication of the importance of this case in the goverrunent's long-range program for the suppression and eventual elimination of dissent in the "land af the free. " On November 26, the official f iling date for briefs in the wiretap argument, John, Pun, Jack and the Amerikan people will begin to take on Nixon and Mitchell before the stacked Court. Freedom4oving people who wish to resist the wholesale erosión of their "inalienable rights" by the government can help concretely towards the enormous leeal expenses to: Center for O-onstitutional Rights 588 Ninth Avenue New York, New York Please indícate that you wlsh your contribution to go toward the wiretap arguments in the case known officially as "United States vs. Sinclair, et al. " Chief-of-Staff Rainbow Peoples Party