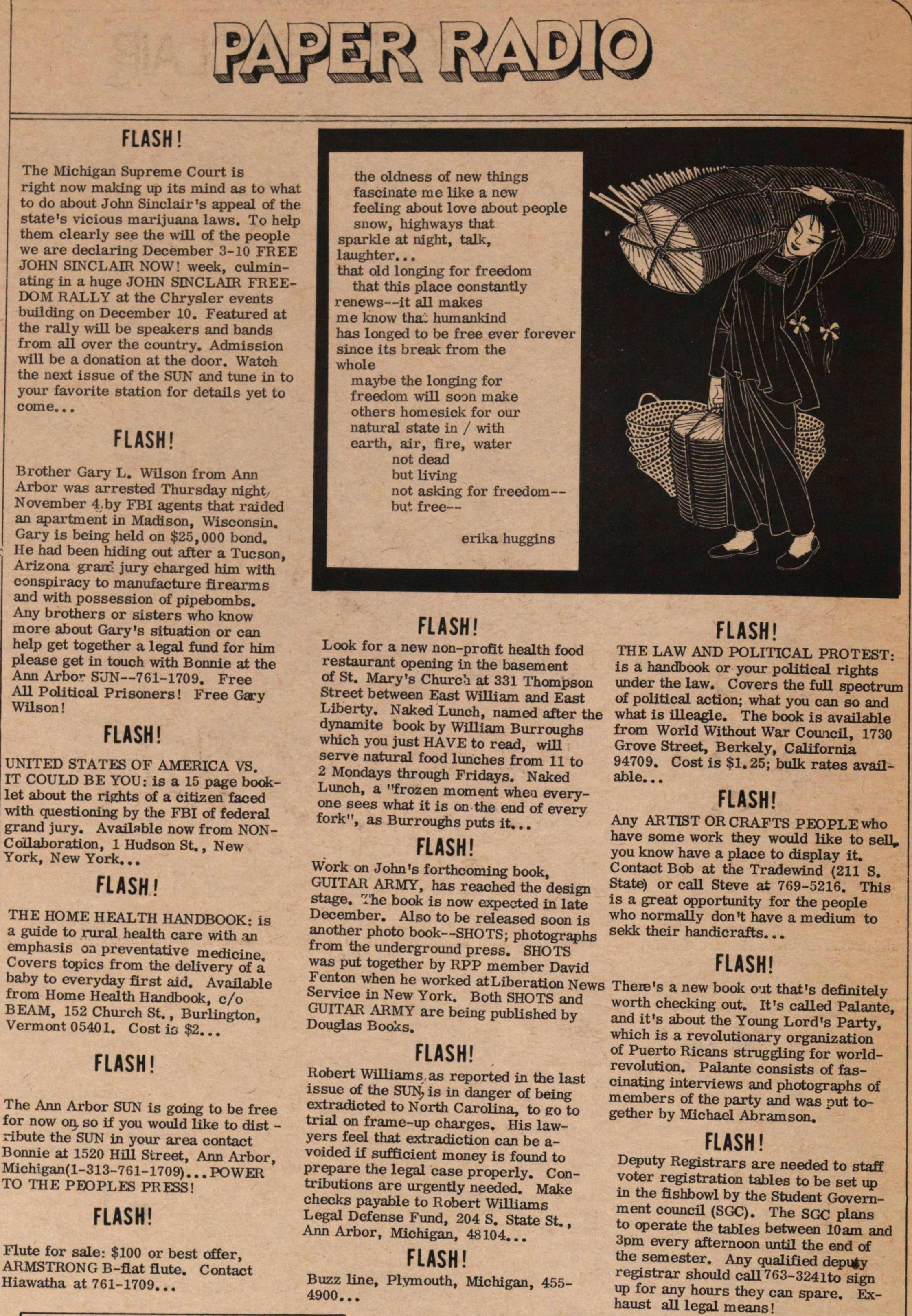 The Michigan Supreme Court is right now making up its mind as to what to do about John Sinclair 's appeal of the state's vicious marijuana laws. To help them clearly see the will of the people we are declaring December 3-10 FREE JOHN SINCLAIR NOW! week, culminating in a huge JOHN SINCLAIR FREEDOM RALLY at the Chrysler events building on December 10. Featured at the rally will be speakers and bands from all over the country. Admission will be a donation at the door. Watch the next issue of the SUN and tune in to your favorite station for details yet to come. . . FLASH! Brother Gary L. Wilson from Ann Arbor was arrested Thursday night, November 4.by FBI agents that raided an apartment in Madison, Wisconsin. Gary is being held on $25,000 bond. He had been hiding out after a Tucson, Arizona grand jury charged him with conspiracy to manufacture firearms and with possession of pipebombs. Any brothers or sisters who know more about Gary's situation or can help get together a legal fund for him please get in touch with Bonnie at the Ann Arbor SUN- 761-1709. Free All Political Prisoners! Free Ga-y Wilson! FLASH! UNITED STATES OF AMERICA VS IT COULD BE YOU: is a 15 page booklet about the rights of a citizen faced wlth questioning by the FBI of federal grand jury. Available now from NONCoilaboration, lHudsonSt. , New York, New York... FLASH! THE HOME HEALTH HANDBOOK: is a guide to rural health care with an emphasis on preventative medicine Covers topics from the delivery of á baby to everyday first aid. Available from Home Health Handbook, co BEAM, 152 Church St. , Burlington Vermont 05401. Cost ic $2. . . FLASH! The Ann Arbor SUN is going to be free for now on, so if you would like to dist - ribute the SUN in your area contact Bonnic at 1520 Hill Street, Ann Arbor, Michigan(l-313-761-1709). .. POWER TO THE PEOPLES PRESS! FLASH! Flute for sale: $100 or best offer, ARMSTRONG B-flat ñute. Contact Hiawatha at 761-1709. . . FLASH! Look for a new non-profit health food restaurant opening in the basement of St. Mary's Church at 331 Thompson Street between East William and East Liberty. Naked Lunch, named after the dynamite book by William Burroughs which you just HAVE to read, will serve natural food lunches from 11 to 2 Mondays through Fridays. Naked Lunch, a "frozen moment whea everyone sees what it is on the end of every fork", as Burroughs puts it. . . FLASH! Work on John 's forthcoming book, GUITAR ARMY, has reached the design stage. The book is now expected in late December. Also to be released soon is another photo book- SHOTS; photographs f rom the underground press. SHOTS was put together by RPP member David Fenton when he worked at Liberation News Service in New York. Both SHOTS and GUITAR ARMY are being published by Douglas Books. FLASH! Robert Williams, as reported in the last issue af the SUN, is in danger of being extradicted to North Carolina, to go to trial on frame-up charges. His lawyers feel that extradiction can be avoided if sufficient money is found to prepare the legal case properly. Contributions are urgenüy needed. Make checks payable to Robert Williams Legal Defense Fund, 204 S. State St. , AnnArbor, Michigan, 48104... FLASH! Buzz line, Plymouth, Michigan, 4554900... FLASH! THE LAW AND POLITICAL PROTEST: is a handbook or your political rights under the law. Covers the full spectrum of political action; what you can so and what is illeagle. The book is available from World Without War Council, 1730 Grove Street, Berkely, California 94709. Cost is $1.25; bulk rates available. . . FLASH! Any ARTIST ORCRAFTS PEOPLEwho have some work they would like to sel], you know have a place to display it. Contact Bob at the Tradewind (211 S. State) or cali Steve at 769-5216. This is a great opportunity for the people who normally don 't have a medium to sekk their handicrafts. . . FLASH! Theie's a new book out that's definitely worth checking out. It's called Palante, and it's about the Young Lord's Party, which is a revolutionary organization of Puerto Ricans struggling for worldrevolutton. Palante consists of fascinating interviews and photographs of members of the party and was put together by Michael Abramson. FLASH ! Deputy Registrars are needed to staff voter registration tables to be set up in the fishbowl by the Student Government council (SGC). The SGC plans to opérate the tables between lOam and 3pm every afternoon until the end of the semester. Any qualified depitfy registrar should callV63-3241to sign up for any hours they can spare. Exhaust all legal means! the oldness of new things fascínate me like a new feeling about love about people snow, highways that sparkle at night, talk, laughter. . . that old longing for freedom that this place constantly renews - it all makes me know thai humankind has longed to be free ever forever since its break from the whole maybe the longing for freedom will soon make others homesick for our natural state in with earth, air, ñre, water not dead but living not asking for freedom - but free -