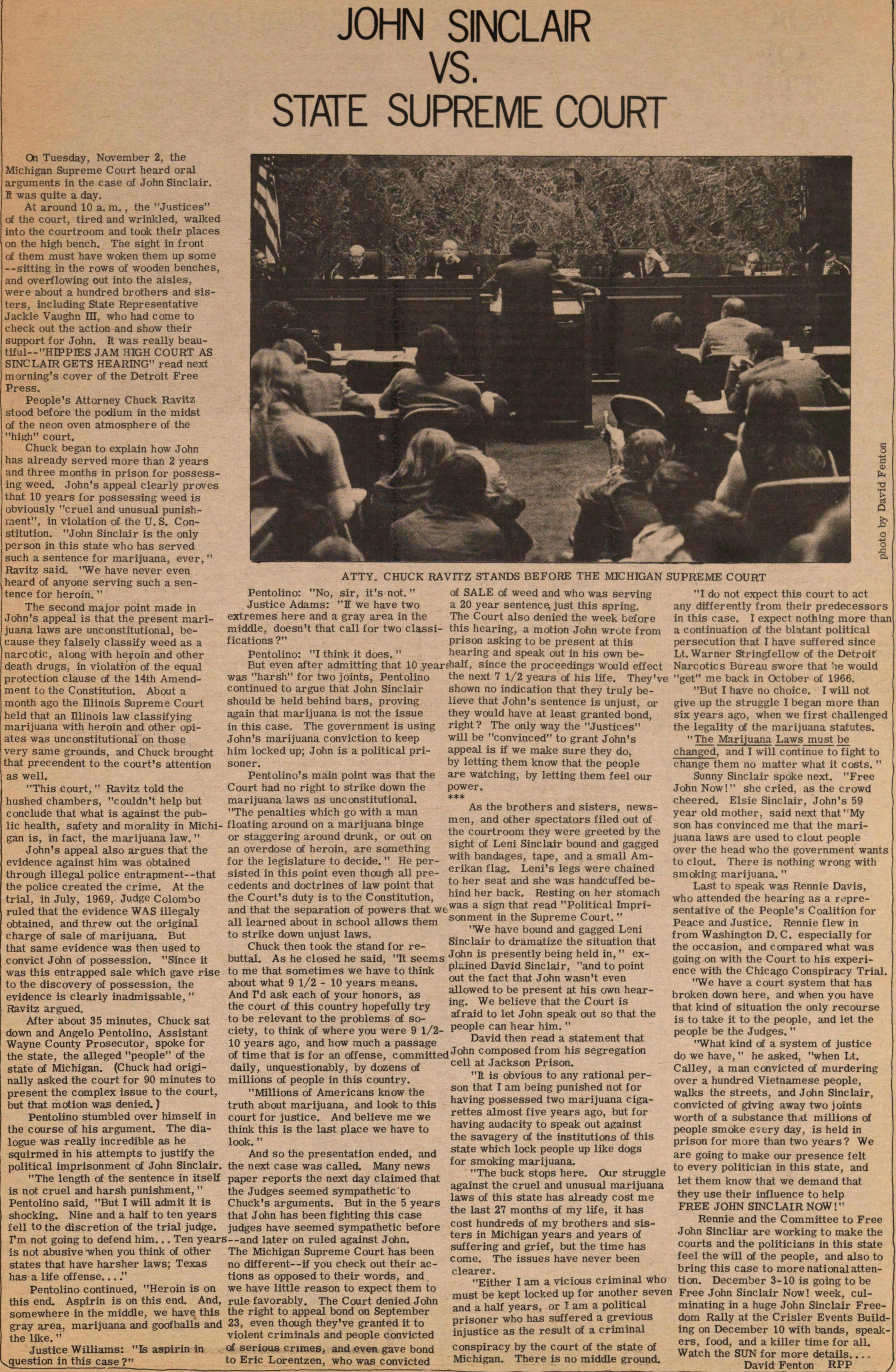 On Tuesday, November 2, the Michigan Supreme Court heard oral arguments in the case of John Sinclair.  It was quite a day.

At around 10 a.m., the "Justices" of the court, tired and wrinkled, walked into the courtroom and took their places on the high bench.  The sight in front of them must have woken them up some--sitting in the rows of wooden benches, and overflowing out into the aisles, were about a hundred brothers and sisters, including State Representative Jackie Vaughn III, who had come to check out the action and show their support for John.  It was really beautiful--"HIPPIES JAM HIGH COURT AS SINCLAIR GETS HEARING" read next morning's cover of the Detroit Free Press.

People's Attorney Chuck Ravitz stood before the podium in the midst of the neon oven atmosphere of the "high" court.

Chuck began to explain how John has already served more than 2 years and three months in prison for possessing weed.  John's appeal clearly proves that 10 years for possessing weed is obviously "cruel and unusual punishment", in violation of the U. S. Constitution.  "John Sinclair is the only person in this state who has served such a sentence for marijuana, ever," Ravitz said.  "We have never even heard of anyone serving such a sentence for heroin."

The second major point made in John's appeal is that the present marijuana laws are unconstitutional, because they falsely classify weed as a narcotic, along with heroin and other death drugs, in violation of the equal protection clause of the 14th Amendment to the Constitution.  About a month ago the Illinois Supreme Court held that an Illinois law classifying marijuana with heroin and other opiates was unconstitutional on those very same grounds, and Chuck brought that precedent to the court's attention as well.

"This court," Ravitz told the hushed chambers, "couldn't help but conclude that what is against the public health, safety and morality in Michigan is, in fact, the marijuana law."

John's appeal also argues that the evidence against him was obtained through illegal police entrapment--that the police created the crime.  At the trial, in July, 1969, Judge Colombo ruled that the evidence WAS illegally obtained, and threw out the original charge of sale of marijuana.  But that same evidence was then used to convict John of possession.  "Since it was this entrapped sale which gave rise to the discovery of possession, the evidence is clearly inadmissible," Ravitz argued.

After about 35 minutes, Chuck sat down and Angelo Pentolino, Assistant Wayne County Prosecutor, spoke for the state, the alleged "people" of the state of Michigan.  (Chuck had originally asked the court for 90 minutes to present the complex issue to the court, but that motion was denied.)

Pentolino stumbled over himself in the course of his argument.  The dialogue was really incredible as he squirmed in his attempts to justify the political imprisonment of John Sinclair.

"The length of the sentence in itself is not cruel and harsh punishment," Pentolino said, "But I will admit it is shocking.  Nine and a half to ten years fell to the discretion of the trial judge.  I'm not going to defend him. . . Ten years is not abusive when you think of other states that have harsher laws; Texas has a life offense. . . ."

Justice Williams: "Is aspirin in question in this case?"

Justice Adams:  "If we have two extremes here and a gray area in the middle, doesn't that call for two classifications?"

Pentolino: "I think it does."

But even after admitting that 10 year was "harsh" for two joints, Pentolino continued to argue that John Sinclair should be held behind bars, proving again that marijuana is not the issue in this case.  The government is using John's marijuana conviction to keep him locked up; John is a political prisoner.

Pentolino's main point was that the Court had no right to strike down the marijuana laws as unconstitutional.  "The penalties which go with a man floating around on a marijuana binge or staggering around drunk, or out on an overdose of heroin, are something for the legislature to decide."  He persisted in this point even though all precedents and doctrines of law point that the Court's duty is to the Constitution, and that the separation of powers that we all learned about in school allows them to strike down unjust laws.

Chuck then took the stand for rebuttal.  As he closed he said, "It seems to me that sometimes we have to think about what 9 1/2 - 10 years means.  And I'd ask each of your honors, as the court of this country hopefully try to be relevant to the problems of society, to think of where you were 9 1/2 - 10 years ago, and how much a passage of time that is for an offense, committed daily, unquestionably, by dozens of millions of people in this country.

"Millions of Americans know the truth about marijuana, and look to this court for justice. And believe me we think this is the last place we have to look."

And so the presentation ended, and the next case was called.  Many news paper reports the next day claimed that the Judges seemed sympathetic to Chuck's arguments.  But in the 5 years that John has been fighting this case judges have seemed sympathetic before--and later on ruled against John.  The Michigan Supreme Court has been no different--if you check out their actions as opposed to their words, and we have little reason to expect them to rule favorably.  The Court denied John the right to appeal bond on September 23, even though they've granted it to violent criminals and people convicted of serious crimes, and even gave bond to Eric Lorentzen, who was convicted of SALE of weed and who was serving a 20 year sentence, just this spring.  The Court also denied the week before this hearing, a motion John wrote from prison asking to be present at this hearing and speak out in his own behalf, since the proceedings would effect the next 7 1/2 years of his life.  They've shown no indication that they truly believe that John's sentence is unjust, or they would have at least granted bond, right?  The only way the "Justices" will be "convinced" to grant John's appeal is if we make sure they do, by letting them know that the people are watching, by letting them feel our power.

***  As the brothers and sisters, newsmen, and other spectators filed out of the courtroom they were greeted by the sight of Leni Sinclair bound and gagged with bandages, tape, and a small Amerikan flag.  Leni's legs were chained to her seat and she was handcuffed behind her back.  Resting on her stomach was a sign that read "Political Imprisonment in the Supreme Court."

"We have bound and gagged Leni Sinclair to dramatize the situation that John is presently being held in," explained David Sinclair, "and to point out the fact that John wasn't even allowed to be present at his own hearing.  We believe that the Court is afraid to let John speak out so that the people can hear him."

David then read a statement that John composed from his segregation cell at Jackson Prison.

"It is obvious to any rational person that I am being punished not for having possessed two marijuana cigarettes almost five years ago, but for having audacity to speak out against the savagery of the institutions of this state which lock people up like dogs for smoking marijuana.

"The buck stops here.  Our struggle against the cruel and unusual marijuana laws of this state has already cost me the last 27 months of my life, it has cost hundreds of my brothers and sisters in Michigan years and years of suffering and grief, but the time has come.  The issues have never been clearer.

"Either I am a vicious criminal who must be kept locked up for another seven and a half years, or I am a political prisoner who has suffered a grievous injustice as the result of a criminal conspiracy by the court of the state of Michigan.  There is no middle ground.

"I do not expect this court to act any differently from their predecessors in this case.  I expect nothing more than a continuation of the blatant political persecution that I have suffered since Lt. Warner Stringfellow of the Detroit Narcotics Bureau swore that he would "get" me back in October of 1966.

"But I have no choice. I will not give up the struggle I began more than six years ago, when we first challenged the legality of the marijuana statutes.

"The Marijuana Laws must be changed, and I will continue to fight to change them no matter what it costs."

" Sunny Sinclair spoke next.  "Free John Now!" she cried, as the crowd cheered.  Elsie Sinclair, John's 59 year old mother, said next that "My son has convinced me that the marijuana laws are used to clout people over the head who the government wants to clout.  There is nothing wrong with smoking marijuana."

Last to speak was Rennie Davis, who attended the hearing as a representative of the People's Coalition for Peace and Justice.  Rennie flew in from Washington D.C. especially for the occasion, and compared what was going on with the Court to his experience with the Chicago Conspiracy Trial.

"We have a court system that has broken down here, and when you have that kind of situation the only recourse is to take it to the people, and let the people be the Judges."

"What kind of a system of justice do we have, " he asked, "when Lt. Calley, a man convicted of murdering over a hundred Vietnamese people, walks the streets, and John Sinclair, convicted of giving away two joints worth of a substance that millions of people smoke every day, is held in prison for more than two years?  We are going to make our presence felt to every politician in this state, and let them know that we demand that they use their influence to help FREE JOHN SINCLAIR NOW!"

Rennie and the Committee to Free John Sinclair are working to make the courts and the politicians in this state feel the will of the people, and also to bring this case to more national attention.  December 3-10 is going to be Free John Sinclair Now! week, culminating in a huge John Sinclair Freedom Rally at the Crisler Events Building on December 10 with bands, speakers, food, and a killer time for all.  Watch the SUN for more details....