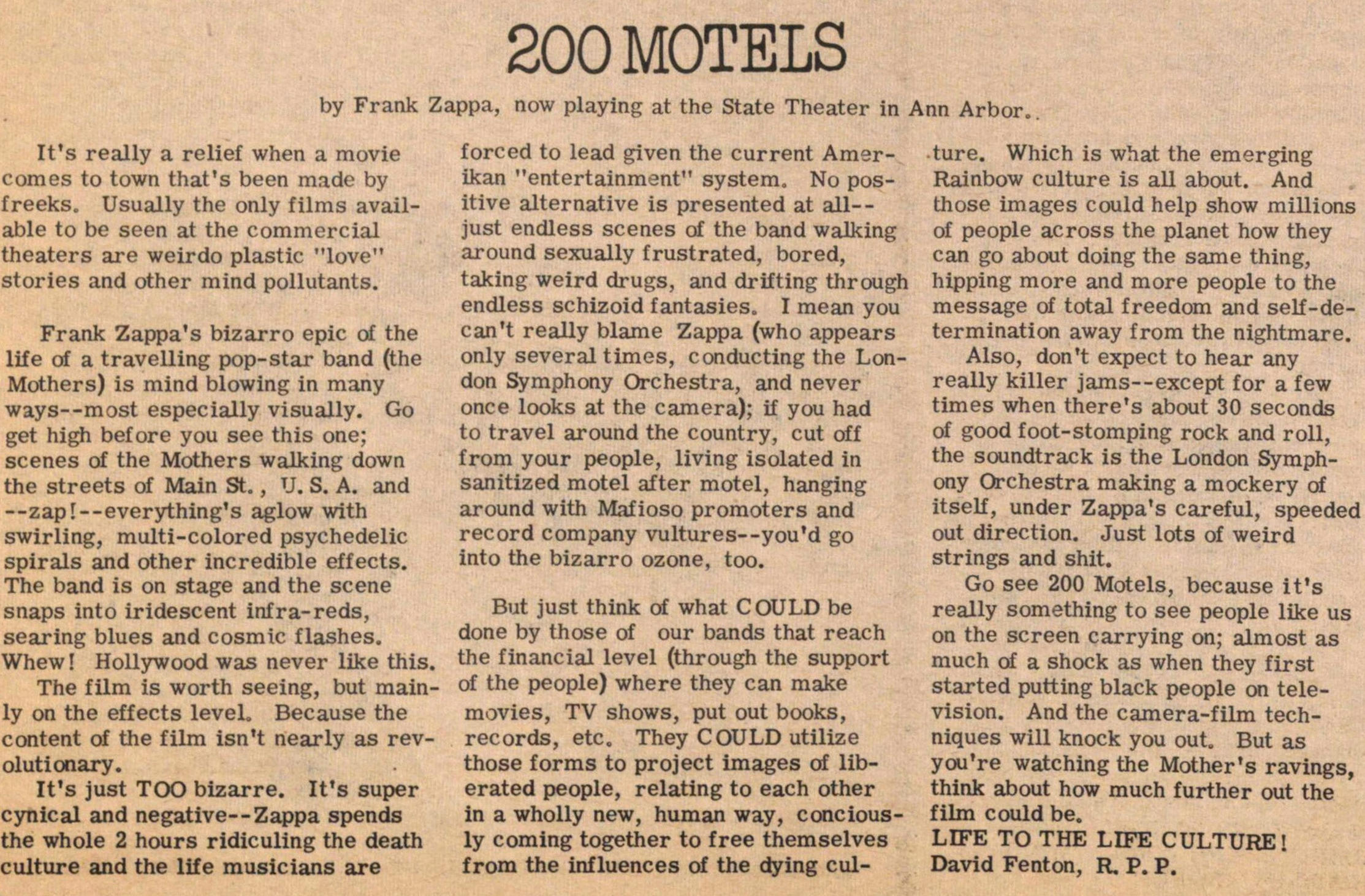 It's really a relief when a movie comes to town that's been made by reeks. Usually the only films available to be seen at the commercial theaters are weirdo plastic "love" stories and other mind pollutants. Frank Zappa's bizarro epic of the Life of a travelling pop-star band (the Mothers) is mind blowing in many ways - most especially visually. Go get high before you see this one; scènes of the Mothers walking down the streets of Main St. , U. S. A. and - zap!--everything's aglow with swirling, multi-colored psychedelic spirals and other incredible effects. The band is on stage and the scène snaps into iridescent infra-reds, searing blues and cosmic flashes. Whew ! Hollywood was never like this. The film is worth seeing, but mainy on the effects level. Because the content of the film isn't nearly as revoluti onary. It's just TOO bizarre. It's super cynical and negative - Zappa spends he whole 2 hours ridiculing the death culture and the life musicians are forced to lead given the current Amerikan "entertainment" system. No positive alternative is presented at all-just endless scènes of the band walking around sexually frustrated, bored, taking weird drugs, and drifting through endless schizoid fantasies. I mean you can 't really blame Zappa (who appears only several times, conducting the London Symphony Ore hestra, and never once looks at the camera); if you had to travel around the country, cut off from your people, living isolated in sanitized motel after motel, hanging around with Mafioso promoters and record company vultures - you'd go into the bizarro ozone, too. But just think of what COULD be done by those of our bands that reach the financial level (through the support of the people) where they can make movies, TV shows, put out books, records, etc. They COULD utiliz e those forms to project images of liberated people, relating to each other in a wholly new, human way, conciously coming together to free themselves from the influences of the dying ture. Which is what the emerging Rainbow culture is all about. And those images could help show millions of people across the planet how they can go about doing the same thing, hipping more and more people to the message of total freedom and self-determination away from the nightmare. Also, don 't expect to hear any really killer jams--except for a few times when there's about 30 seconds of good foot-stomping rock and roll, the soundtrack is the London Symphony Orchestra making a mockery of itself, under Zappa's careful, speeded out direction. Just lots of weird strings and shit. Go see 200 Motels, because it's really something to see people like us on the screen carrying on; alm os t as much oí a shock as when they first started putting black people on televisión. And the camera-film techniques will knock you out. But as you're watching the Mother's ravings, think about how much further out the film could be. LIFE TO THE LIFE CULTURE'