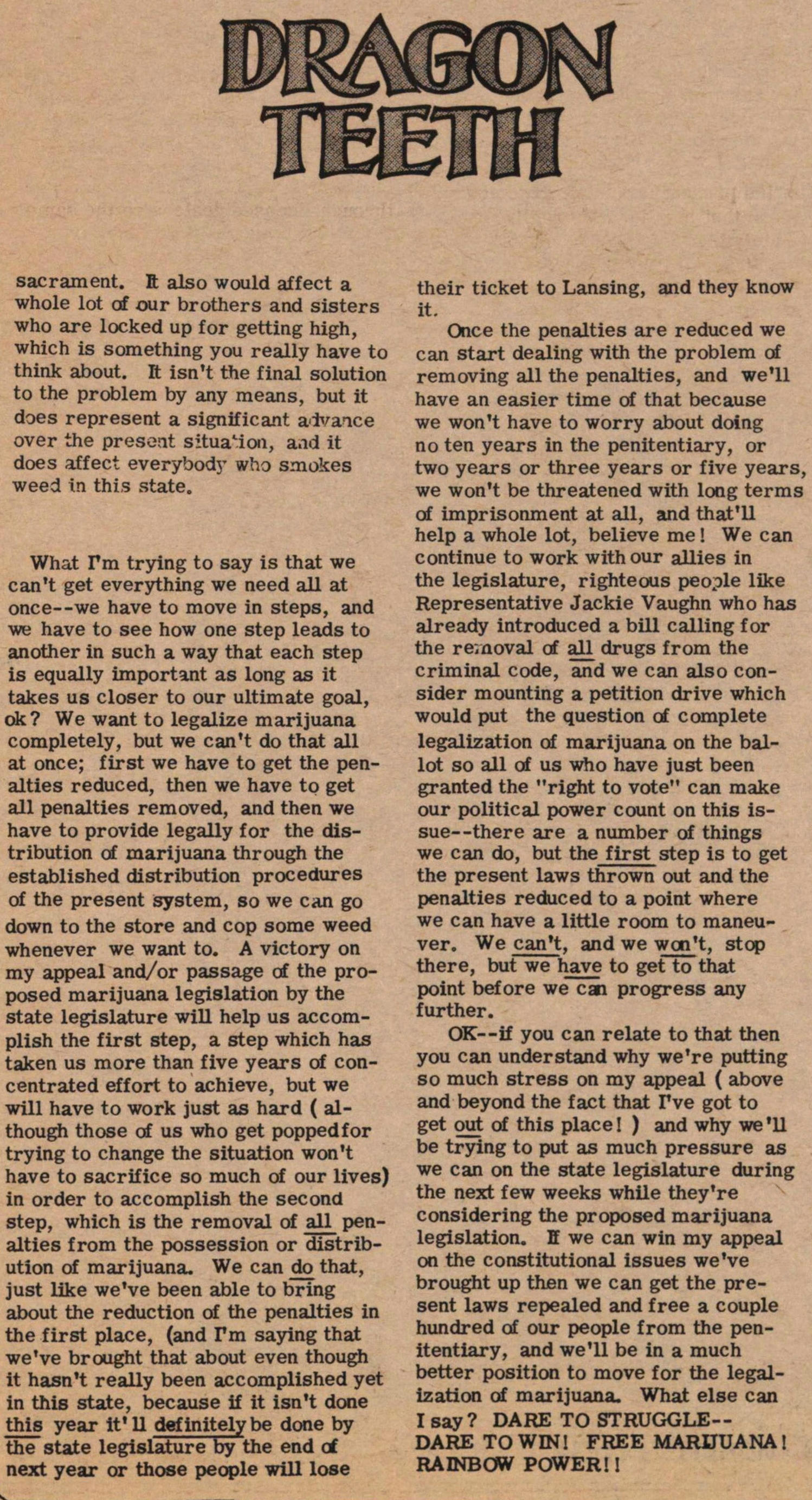 sacrament, ft also would affect a whole lot of our brothers and sisters who are locked up for getting high, which is something you really have to think about. K isn't the final solution to the problem by any means, but it does represent a significant aivaace over the present situaron, a.id it does affect everybody who smokes weed in this state. What Pm trying to say is that we can 't get everything we need all at once--we have to move in steps, and we have to see how one step leads to another in such a way that each step is equally important as long as it takes us closer to our ultímate goal, ok? We want to legalize marijuana completely, but we can't do that all at once; first we have to get the penalties reduced, then we have to get all penalties removed, and then we have to provide legally for the distribution of marijuana through the established distribution procedures of the present system, so we can go down to the store and cop some weed whenever we want to. A victory on my appeal andor passage of the proposed marijuana legislation by the state legislature will help us accomplish the first step, a step which has taken us more than five years of concentrated effort to achieve, but we will have to work just as hard ( although those of us who get poppedfor trying to change the situation won 't have to sacrifice so much of our lives) in order to accomplish the second step, which is the removal of all penalties f rom the possession or distribution of marijuana. We can do that, just like we've been able to bring about the reduction of the penalties in the first place, (and Fm saying that we've brought that about even though it hasn't really been accomplished yet in this state, because if it isn't done this year it1 U definitelybe done by the state legislature by the end of next year or those people will lose their ticket to Lansing, and they know it. Once the penalties are reduced we can start dealing with the problem of removing all the penalties, and we'll have an easier time of that because we won 't have to worry about doing no ten years in the penitentiary, or two years or three years or five years, we won't be threatened with long terms of imprisonment at all, and that'll help a whole lot, believe me ! We can continue to work withour allies in the legislature, righteous people like Representative Jackie Vaughn who has already introduced a bilí calling f or the renoval of all drugs f rom the criminal code, and we can also consider mounting a petition drive which would put the question oí complete legalization of marijuana on the ballot so all of us who have just been granted the "right to vote" can make our political power count on this issue - there are a number of things we can do, but the first step is to get the present laws thrown out and the penalties reduced to a point where we can have a little room to maneuver. We can 't, and we won't, stop there, but we have to get to that point before we can progress any further. OK - if you can relate to that then you can understand why we're putting so much stress on my appeal ( above and beyond the f act that Fve got to get out of this place! ) and why we '11 be trying to put as much pressure as we can on the state legislature during the next few weeks while they're considering the proposed marijuana legislation. S we can win my appeal on the constitutional issues we've brought up then we can get the present laws repealed and f ree a couple hundred of our people from the penitentiary, and we'll be in a much better position to move f or the legalization of marijuana. What else can I say? DARÉ TO STRUGGLE-DARETOWIN! FREE MARDUANA1 RAINBOW POWER! !