We Will Be Free! 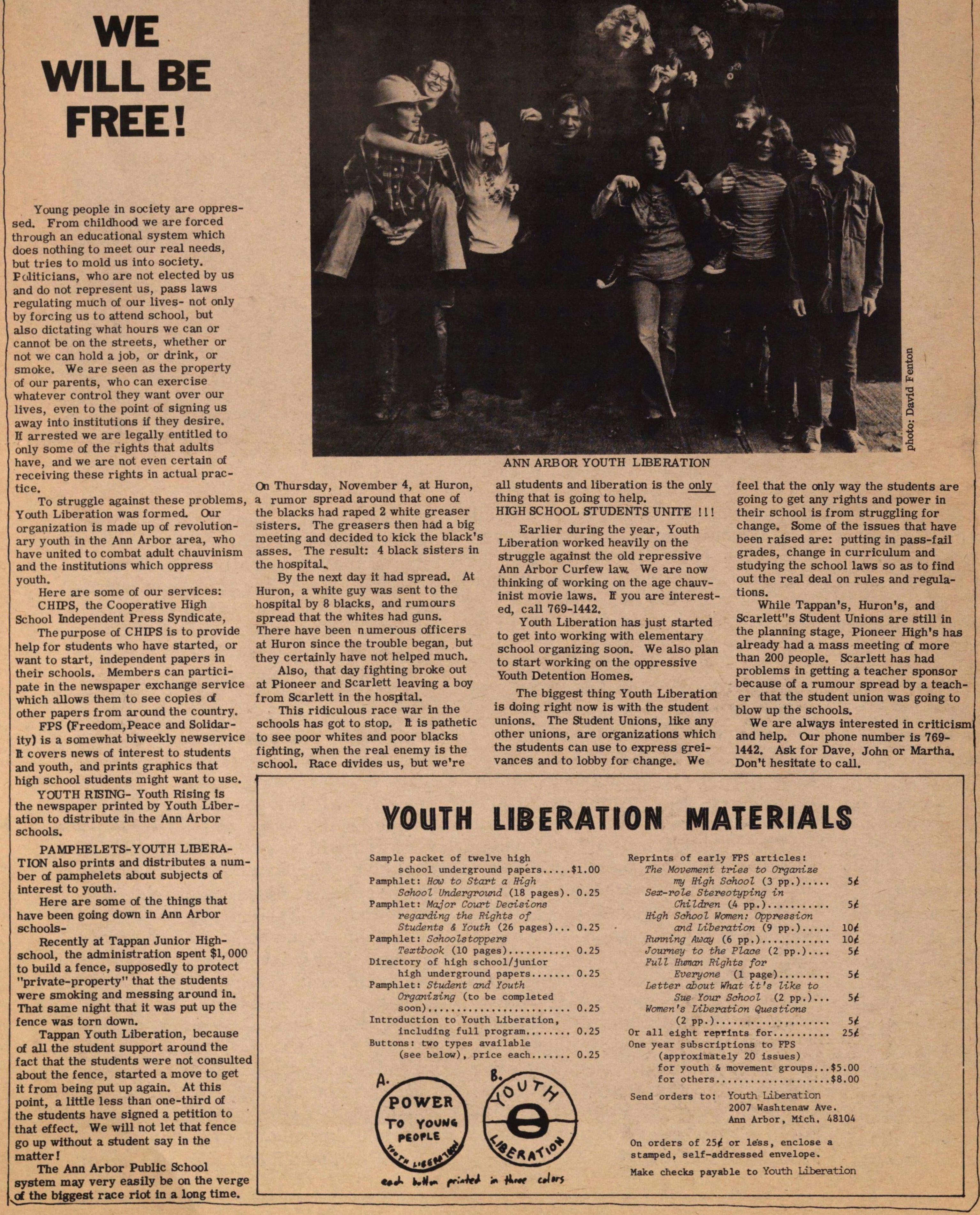 Young people in society are oppressed. From childhood we are forced through an educational system which does nothing to meet our real needs, but tries to mold us into society. Fcliticians, who are not elected by us and do not represent us, pass laws regulating much of our not only by forcing us to attend school, but also dictating what hours we can or cannot be on the streets, whether or not we can hold a job, or drink, or smoke. We are seen as the property of our parents, who can exercise whatever control they want over our lives, even to the point of signing us away into institutions if they desire. K arrested we are legally entitled to only some of the rights that adults have, and we are not even certain of receiving these rights in actual practice. To struggle against these problems, Youth Liberation was formed. Our organization is made up of revolutionary youth in the Ann Arbor area, who have united to combat adult chauvinism and the institutions which oppress youth. Here are some of our services: CHIPS, the Cooperative High School Independent Press Syndicate, The purpose of CHIPS is to provide help for students who have started, or want to start, independent papers in their schools. Members can particípate in the newspaper exchange service which allows them to see copies of other papers from around the country. FPS (Freedom,Peace and Solidar - ity) is a somewhat biweekly newservice It covers news of interest to students and youth, and prints graphics that high school students might want to use. YOUTH Youth Rising is the newspaper printed by Youth Liberation to distribute in the Ann Arbor schools. PAMPHELETS-YOUTH LIBERATION also prints and distributes a number oí pamphelets about subjects of interest to youth. Here are some of the things that have been going down in Ann Arbor schoolsRecently at Tappan Junior Highschool, the administration spent $1, 000 to build a fence, supposedly to protect "private-property" that the students were smoking and messing around ia. That same night that it was put up the fence was torn down. Tappan Youth Liberation, because of all the student support around the fact that the students were not consulted about the fence, started a move to get it from being put up again. At this point, a little less than one-third of the students have signed a petition to that effect. We will not let that fence go up without a student say in the matter ! The Ann Arbor Public School system may very easily be on the verge vof the blggest race rlot ia a long time. On Thursday, November 4, at Huron, a rumor spread around that one of the blacks had raped 2 white greaser sisters. The greasers then had a big meeting and decided to kick the black's asses. The result: 4 black sisters in the hospital By the next day it had spread. At Huron, a white guy was sent to the hospital by 8 blacks, and rumours spread that the whites had guns. There have been numerous officers at Huron since the trouble began, but they certainly have not helped much. Also, that day fighting broke out at Pioneer and Scarlett leaving a boy from Scarlett in the hospital. This ridiculous race war in the schools has got to stop. ft is pathetic to see poor whites and poor blacks fighting, when the real enemy is the school. Race divides us, but we're all students and liberation is the only thing that is going to help. HIGH SCHOOL STUDENTS UNITE !l! Earlier during the year, Youth Liberation worked heavily on the struggle against the old repressive Ann Arbor Curfew law. We are now thinking of working on the age chauvinist movie laws. E you are interest - ed, cali 769-1442. Youth Liberation has just started to get into working with elementary school organizing soon. We also plan to start working on the oppressive Youth Detention Homes. The biggest thing Youth Liberation is doing right now is with the student unions. The Student Unions, like any other unions, are organizations which the students can use to express greivances and to lobby for change. We feel that the only way the students are going to get any rights and power in their school is f rom struggïing for change. Some of the issues that have been raised are: putting in pass-fail grades, change in curriculum and studying the school laws so as to find out the real deal on rules and regulations. While Tappan's, Huron's, and Scarlett"s Student Unions are still in the planning stage, Pioneer High's has already had a mass meeting of more than 200 people. Scarlett has had problems in getting a teacher sponsor because of a rumour spread by a teacher that the student union was going to blow up the schools. We are always interested in criticism and help. Our phone number is 7691442. Ask for Dave, John or Martha. Don 't hesitate to cali.