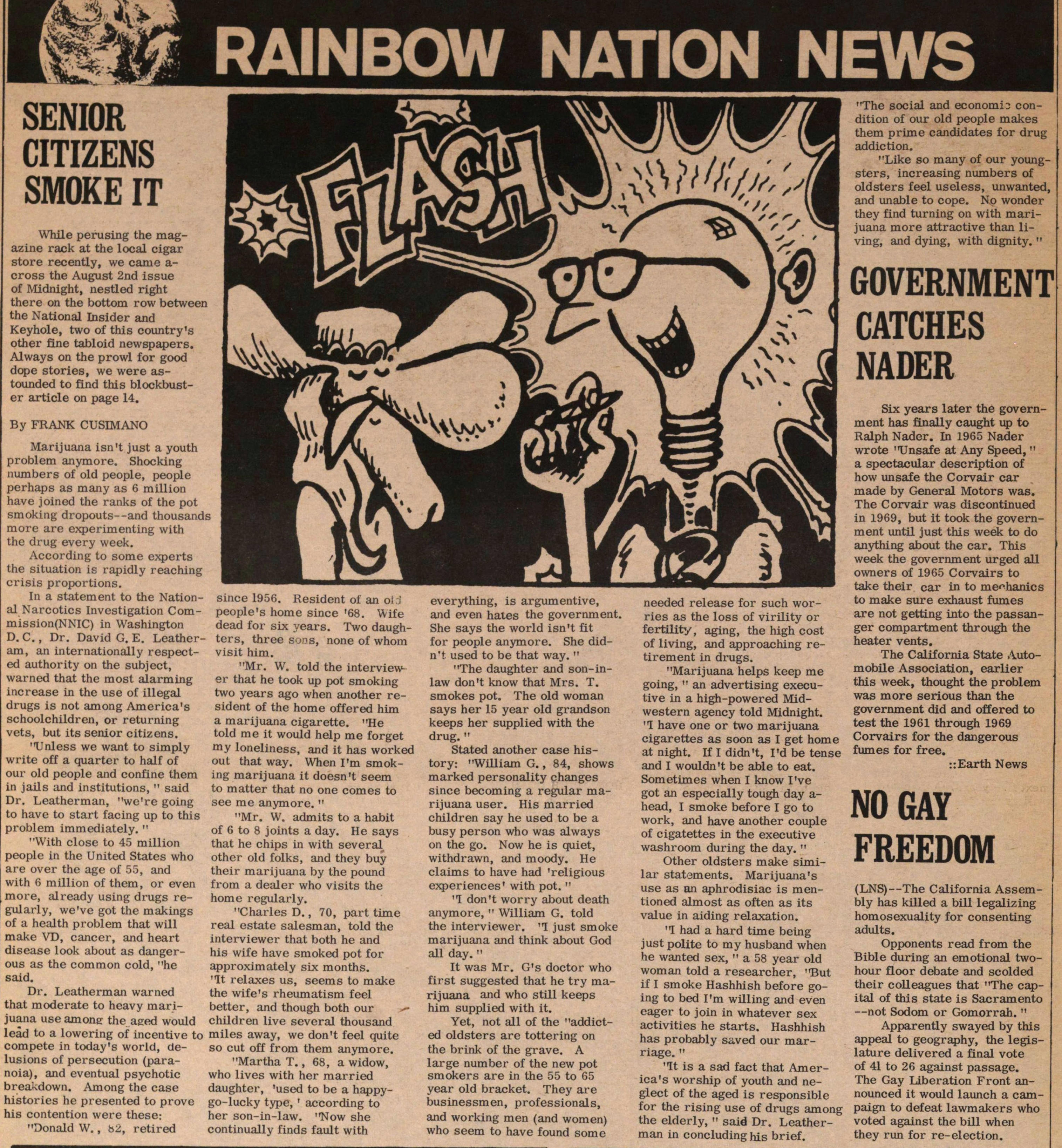 While perusing the magazine rack at the local cigar store recently, we carue across the August 2nd issue of Midnight, nestled right there on the bottom row between the National Insider and Keyhole, two of this country 's other fine tabloid newspapers. Always on the prowl for good dope stories, we were astounded to find this blockbuster article on page 14. By FRANK CUSIMANO Marijuana isn't just a youth problem anymore. Shocking numbers of old people, people perhaps as many as 6 million have joined the ranks of the pot smoking dropouts--and thousands more are experimenting with the drug every week. According to some experts the situation is rapidly reaching crisis proportions. In a statement to the National Narcotics Investigation Commission(NNIC) in Washington D. C. , Dr. David G. E. Leatheram, an internationally respected authority on the subject, warned that the most alarm ing increase in the use of illegal drugs is not among America's schoolchildren, or returning vets, but its senior citizens. "Unless we want to simply write off a quarter to half of our old people and confine them in jails and institutions, " said Dr. Leatherman, "we're going to have to start facing up to this problem immediately. " i "With close to 45 million people in the United States who i are over the age of 55, and I with 6 million of them, or even : more, already using drugs 1 gularly, we've got the makings of a health problem that will make VD, cáncer, and heart i disease look about as I ous as the common cold, "he said. i Dr. Leatherman warned 1 that moderate to heavy 1 juana use amone the aced would leid to a lowering of incentive to i compete in today's world, s lusions of persecution (paranoia), and eventual psychotic breakdown. Among the case c histories he presented to prove g his contention were these: f "Donald W. , b, retired c since 1956. Resident of an o J people's home since '68. Wife dead for six years. Two daughters, three sous, none of whom visit him. "Mr. W. told the interview er that he took up pot smoking two years ago when another resident of the home offered him a marijuana cigarette. "He told me it would help me forget my loneliness, and it has worked out that way. When I'm smoking marijuana it doesn't seem to matter that no one comes to see me anymore. " "Mr. W. admits to a habit of 6 to 8 joints a day. He says that he chips in with several other oíd folks, and they buy their marijuana by the pound from a dealer who visits the home regularly. "Charles D. , 70, part time real estáte salesman, told the interviewer that both he and his wife have smoked pot for approximately six months. "It relaxes us, seems to make the wife's rheumatism feel better, and though both our children live several thousand miles away, we don't feel quite so cut off from them anymore. "Martha T. , 68, a widow, who Uves with her married daughter, 'used to be a happygo-lucky type, ' according to her son-in-law. "Now she continually finds fault with everything, is argumentive, and even hales the government. She says the world isn't fit for people anymore. She didn't used to be that way. " "The daughter and son-inlaw don 't know that Mrs. T. smokes pot. The old woman says her 15 year old grandson keeps her supplied with the drug. " Stated another case history: "William G. , 84, shows marked personality changes since becoming a regular marijuana user. His married children say he used to be a busy person who was always on the go. Now he is quiet, withdrawn, and moody. He claims to have had 'religious experiences' with pot. " '1 don 't worry about death anymore, " William G. told the interviewer. "I just smoke marijuana and think about God all day. " It was Mr. G's doctor who first suggested that he try marijuana and who still keeps him supplied with it. Yet, not all of the "addicted oldsters are tottering on the brink of the grave. A large number of the new pot smokers are in the 55 to 65 year old bracket. They are businessmen, professionals, and working men (and women) who seem to have found some needed release for such worries as the loss of virility or fertility, aging, the high cost of living, and approaching retirement in drugs. "Marijuana helps keep me going, " an advertising executive in a high-powered Midwestern agency told Midnight. "I have one or two marijuana cigarettes as soon as I get home at night. If I didn't, I'd be tense and I wouldn't be able to eat. Sometimes when I know I've got an especially tough day ahead, I smoke before I go to work, and have another couple of cigatettes in the executive washroom during the day. " Other oldsters make similar statements. Marijuana's use as an aphrodisiac is mentioned almost as often as its value in aiding relaxation. "I had a hard time being just polite to my husband when he wanted sex, " a 58 year old woman told a researcher, "But if I smoke Hashhish before going to bed I'm willing and even eager to join in whatever sex activities he starts. Hashhish has probably saved our marriage. " 'It is a sad fact that America's worship of youth and neglect of the aged is responsible for the rising use of drugs among the elderly, " saië Dr. Leatherman in concluding his brief. "The social and economi3 condition of our old people makes them prime candidates for drug addiction. "Like so many of our youngsters, increasing numbers of oldsters feel useless, unwanted, and unable to cope. No wonder they find turning on with marijuana more attractive than living, and dying, with dignity. "