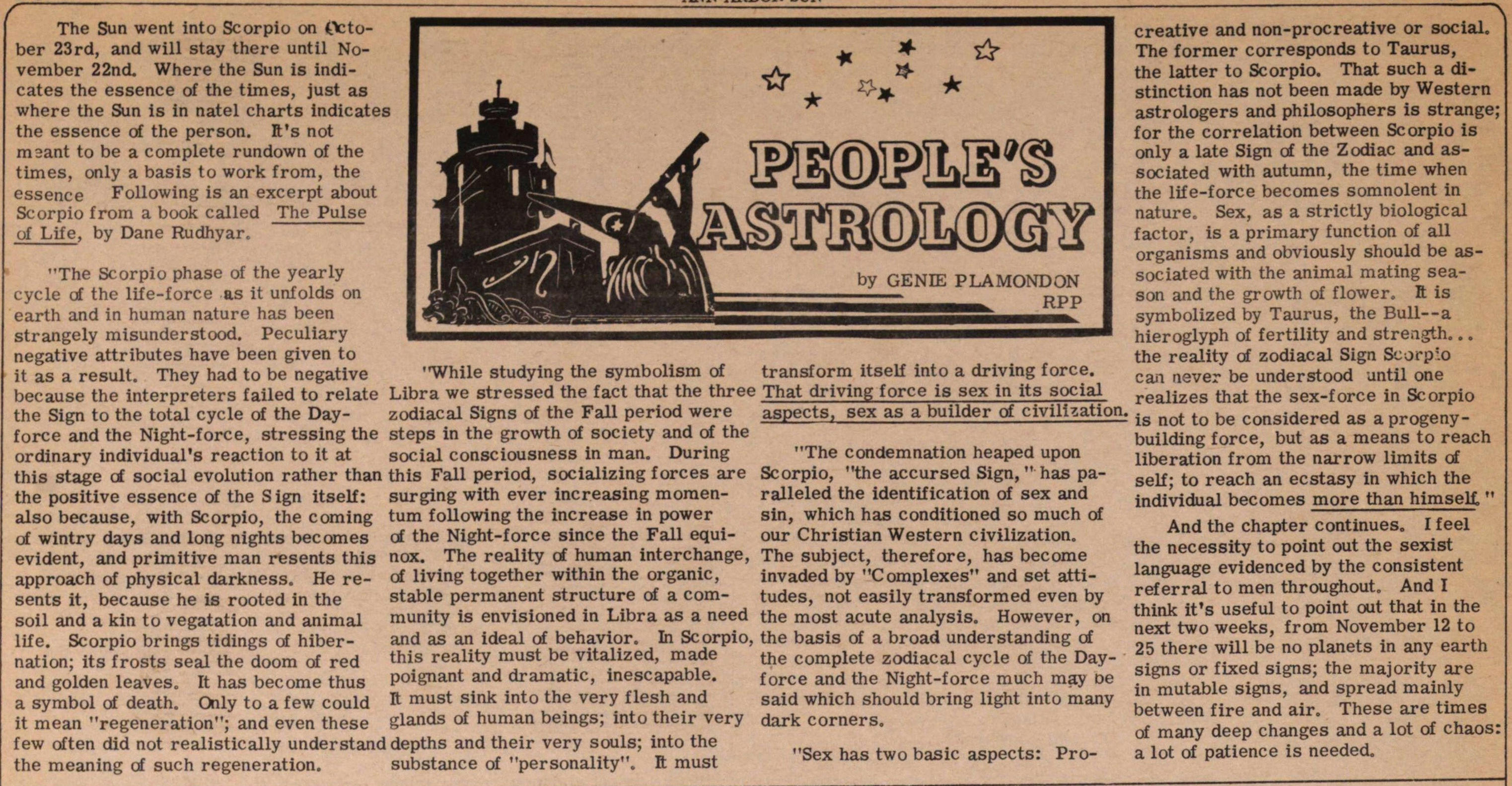 RPP - fc. The Sun went into Scorpio on October 23rd, and will stay there until November 22ndL Where the Sun is indicates the essence of the times, just as where the Sun is in natel charts indicates the essence of the person. U's not maant to be a complete rundown of the times, only a basis to work from, the essence Following is an excerpt about Scorpio from a book called The Pulse of Life, by Dane Rudhyar. "The Scorpio phase of the yearly cycle of the life-force as it unfolds on earth and in human nature has been strangely misunderstood. Peculiary negative attributes have been given to it as a result. They had to be negative because the interpr eters failed to relate the Sign to the total cycle of the : force and the Night-force, stressing the ordinary individual's reaction to it at this stage of social evolution rather than I the positive essence of the Sign itself: i also because, with Scorpio, the coming of wintry days and long nights becomes evident, and primitive man resents this approach of physical darkness. He resents it, because he is rooted in the soil and a kin to vegatation and animal life. Scorpio brings tidings of hibernation; its frosts seal the doom of red and golden leaves. It has become thus a symbol of death. Only to a few could it mean "regeneration"; and even these few aften did not realistically understand the meaning of such regeneration. "While studying the symbolism of Libra we stressed the fact that the three zodiacal Signs of the Fall period were steps in the growth of society and of the social consciousness in man. During Jiis Fall period, socializing f orces are ïurging with ever increasing moraen:um following the increase in power :f the Night-force since the Fall equiïox. The reality of human interchange, af living together within the organic, stable permanent structure of a community is envisioned in Libra as a need and as an ideal of behavior. In Scorpio, this reality must be vitalized, made poignant and dramatic, inescapable. tt must sink into the very flesh and jlands of human beings; into their very iepths and their very souls; into the substance of "personality". R must transí orm itself into a driving forcé. That driving forcé is sex in its social aspects, sex as a builder of civilization. "The condemnation heaped upon Scorpio, "the accursed Sign, "has paralleled the identification of sex and sin, which has conditioned so much of our Christian Western civilization. The subject, therefore, has become invaded by "Complexes" and set attitudes, not easily transformed even by the most acute analysis. However, on the basis of a broad understanding of the complete zodiacal cycle of the Dayf orce and the Night-force much may De said which should bring light into many dark corners. "Sex has two basic aspects: creative and non-procreative or social. The former corresponda to Taurus, the latter to Scorpio. That such a distinction has not been made by Western astrologers and philosophers is strange; for the correlation between Scorpio is only a late Sign oí the Zodiac and associated with autumn, the time when the lif e-force becomes somnolent in nature. Sex, as a strictly biológica! factor, is a primary function of all organisms and obviously should be associated with the animal mating season and the growth of flower. ft is symbolized by Taurus, the Bull--a hieroglyph of fertility and strength. . . the reality cf zodiacal Sign Scorp'.o can riever be understood until one realizes that the sex-force in Scorpio is not to be considered as a progenybuilding forcé, but as a means to reach liberation from the narrow limits of self; to reach an ecstasy in which the individual becomes more than himself, " And the chapter continúes. I feel the necessity to point out the sexist language evidenced by the consistent reí erral to men throughout. And I think it's useful to point out that in the next two weeks, from November 12 to 25 there will be no planets in any earth signs or fixed signs; the majority are in mutable signs, and spread mainly between fire and air. These are times of many deep changes and a lot of chaos: a lot of patience is needed. wËÊ b= ■BaaBaHBBoi