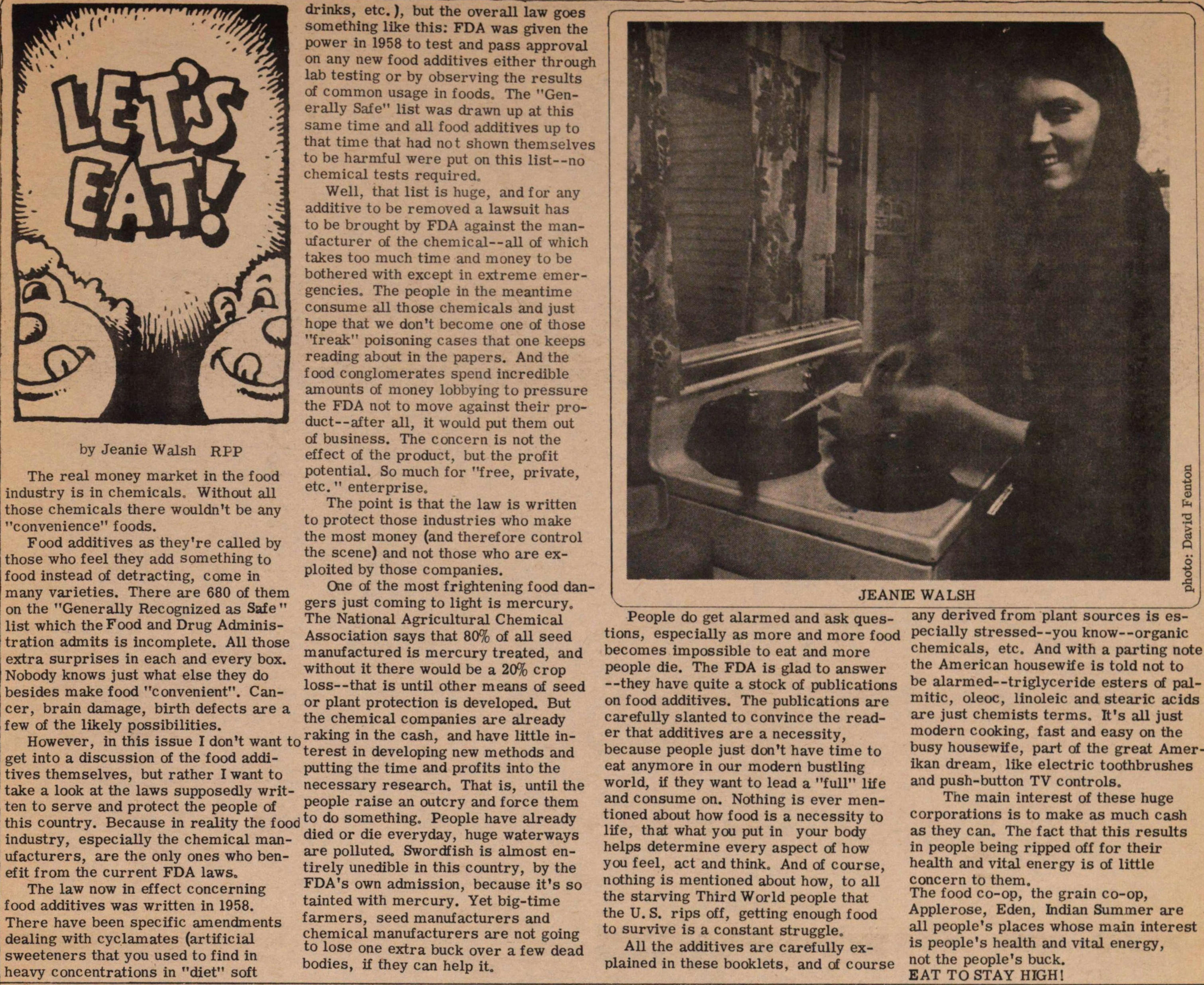 The real money market in the food industry is in Chemicals. Without all those Chemicals there wouldn't be any "convenience" foods. Food additives as they're called by those who feel they add something to food instead of detracting, come in many varieties. There are 680 of them on the "Generally Recognized as Safe " list which the Food and Drug Administration admits is incomplete. All those extra surprises in each and every box. Nobody knows just what else they do besides make food "convenient". Cancer, brain damage, birth defects are a few of the likely possibilities. However, in this issue I don't want to get into a discussion of the food additives themselves, but rather I want to take a look at the laws supposedly written to serve and protect the people of this country. Because in reality the food industry, especially the Chemical manufacturers, are the only ones who benefit from the current FDA laws. The law now in effect concerning food additives was written in 1958. There have been specific amendments dealing with cyc lam ates (artificial sweeteners that you used to find in heavy concentrations in "diet" soft drinks, etc. ), but the overall law goes something like this: FDA was given the power in 1958 to test and pass approval on any new food additives either through lab testing or by observing the results of common usage in foods. The "Generally Safe" list was drawn up at this same time and all food additives up to that time that had not shown themselves to be harmful were put on this list--no chemical tests required. Well, that list is huge, and f or any additive to be removed a lawsuit has to be brought by FDA against the manufacturer of the chemie -all of which takes too much time and money to be bothered with except in extreme emergencies. The people in the meantime consume all those Chemicals and just hope that we don't become one of those "freak" poisoning cases that one keeps reading about in the papers. And the food conglomerates spend incredible amounts of money lobbying to pressure the FDA not to move against their product- after all, it would put them out of business. The concern is not the effect of the product, but the profit potential. So much for "free, private, etc. " enterprise. The point is that the law is written to protect those industries who make the most money (and theref ore control the scène) and not those who are exploited by those companies. Oie of the most frightening food dangers just coming to light is mercury. The National Agricultural Chemical Association says that 80% of all seed manufactured is mercury treated, and without it there would be a 20% erop -that is until other means of seed or plant protection is developed. But the chemical companies are already raking in the cash, and have little interest in developing new methods and putting the time and prof its into the necessary research. That is, until the people raise an outcry and force them to do something. People have already died or die everyday, huge waterways are polluted. Swordfish is almost entirely unedible in this country, by the FDA's own admission, because it's so tainted with mercury. Yet big-time farmers, seed manuf acturers and chemical manufacturers are not going to lose one extra buck over a few dead bodies, if they can help it. People do get alarmed and ask questions, especially as more and more food becomes impossible to eat and more people die. The FDA is glad to answer - they have quite a stock of publications on food additives. The publications are carefully slanted to convince the reader that additives are a necessity, because people just don 't have time to eat anymore in our modern bustling world, if they want to lead a "full" life and consume on. Nothing is ever mentioned about how food is a necessity to life, that what you put in your body helps determine every aspect of how you f eel, act and think. And of course, nothing is mentioned about how, to all the starving Third World people that the U. S. rips off, getting enough food to survive is a constant struggle. All the additives are carefully explained in these booklets, and af course any denved from plant sources is especially stressed--you know - organic Chemicals, etc. And with a parting note the American housewife is told not to be alarmed--triglyceride esters of palmitic, oleoc, linoleic and stearic acids are just chemists terms. It's all just modern cooking, fast and easy on the busy housewife, part of the great Amerikan dream, like electric toothbrushes and push-button TV Controls. The main interest of these huge corporations is to make as much cash as they can. The fact that this results in people being ripped off for their health and vital energy is of little concern to them. The food co-op, the grain co-op, Applerose, Eden, Indian Summer are all people's places whose main interest is people's health and vital energy, not the people's buck. EATTOSTAY HIGH!