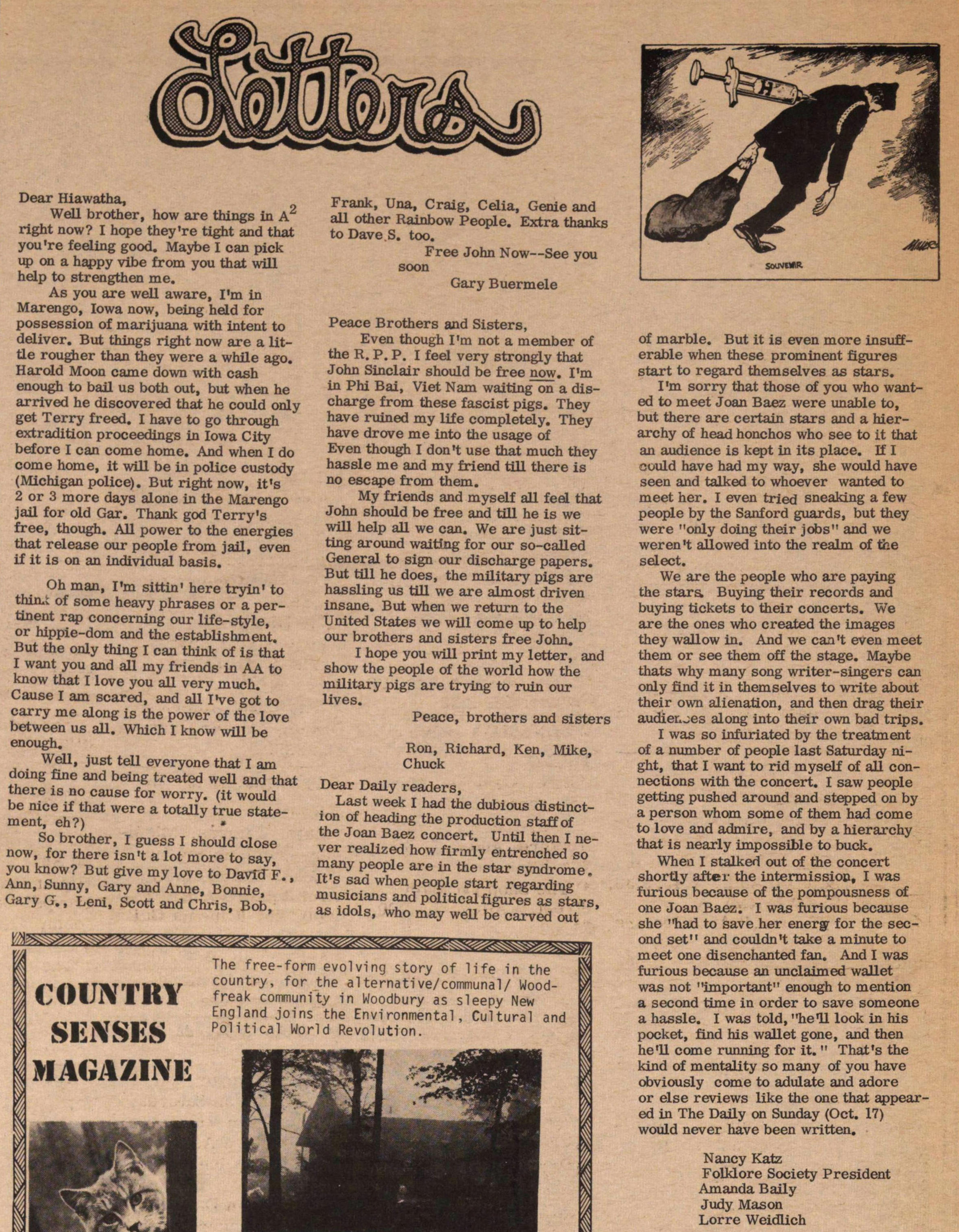 Well brother, how are things in A2 right now? I hope they're tight and that you're feeling good. Maybe I can pick up on a happy vibe from you that will help to strengthen me.

As you are well aware, I'm in Marengo, Iowa now, being held for possession of marijuana with intent to deliver. But things right now are a little rougher than they were a while ago. Harold Moon came down with cash enough to bail us both out, but when he arrived he discovered that he could only get Terry freed. I have to go through extradition proceedings in Iowa City before I can come home. And when I do come home, it will be in police custody (Michigan police). But right now, it's 2 or 3 more days alone in the Marengo jail for old Gar. Thank god Terry's free, though. All power to the energies that release our people from jail, even if it is on an individual basis.

Oh man, I'm sittin' here tryin' to think of some heavy phrases or a pertinent rap concerning our life-style, or hippie-dom and the establishment. But the only thing I can think of is that I want you and all my friends in AA to know that I love you all very much. Cause I am scared, and all I've got to carry me along is the power of the love between us all. Which I know will be enough.

Well, just tell everyone that I am doing fine and being treated well and that there is no cause for worry. (it would be nice if that were a totally true statement, eh?).

So brother, I guess I should close now, for there isn't a lot more to say, you know? But give my love to Dave F., Ann, Sunny, Gary and Anne, Bonnie, Gary G., Leni, Scott and Chris, Bob, Frank, Una, Craig, Celia, Genie and all other Rainbow People. Extra thanks to Dave S. too.

Even though I'm not a member of the R.P.P. I feel very strongly that John Sinclair should be free now. I'm in Phi Bai, Viet Nam waiting on a discharge from these fascist pigs. They have ruined my life completely. They have drove me into the usage of     Even though I don 't use that much they hassle me and my friend till there is no escape from them.

My friends and myself all feel that John should be free and till he is we will help all we can. We are just sitting around waiting for our so-called General to sign our discharge papers. But till he does, the military pigs are hassling us till we are almost driven insane. But when we return to the United States we will come up to help our brothers and sisters free John.

I hope you will print my letter, and show the people of the world how the military pigs are trying to ruin our lives.

Last week I had the dubious distinction of heading the production staff of the Joan Baez concert. Until then I never realized how firmly entrenched so many people are in the star syndrome. It's sad when people start regarding musicians and political figures as stars, as idols, who may well be carved out of marble. But it is even more insufferable when these prominent figures start to regard themselves as stars.

I'm sorry that those of you who wanted to meet Joan Baez were unable to, but there are certain stars and a hierarchy of head honchos who see to it that an audience is kept in its place. If I could have had my way, she would have seen and talked to whoever wanted to meet her. I even tried sneaking a few people by the Sanford guards, but they were "only doing their jobs" and we weren't allowed into the realm of the select.

We are the people who are paying the stars, Buying their records and buying tickets to their concerts. We are the ones who created the images they wallow in. And we can't even meet them or see them off the stage. Maybe that's why many song writer-singers can only find it in themselves to write about their own alienation, and then drag their audiences along into their own bad trips.

I was so infuriated by the treatment of a number of people last Saturday night, that I want to rid myself of all connections with the concert. I saw people getting pushed around and stepped on by a person whom some of them had come to love and admire, and by a hierarchy that is nearly impossible to buck.

When I stalked out of the concert shortly after the intermission, I was furious because of the pompousness of one Joan Baez. I was furious because she "had to save her energy for the second set" and couldn't take a minute to meet one disenchanted fan. And I was furious because an unclaimed wallet was not "important" enough to mention a second time in order to save someone a hassle. I was told, "he'll look in his pocket, find his wallet gone, and then he'll come running for it." That's the kind of mentality so many of you have obviously come to adulate and adore or else reviews like the one that appeared in The Daily on Sunday (Oct. 17) would never have been written.