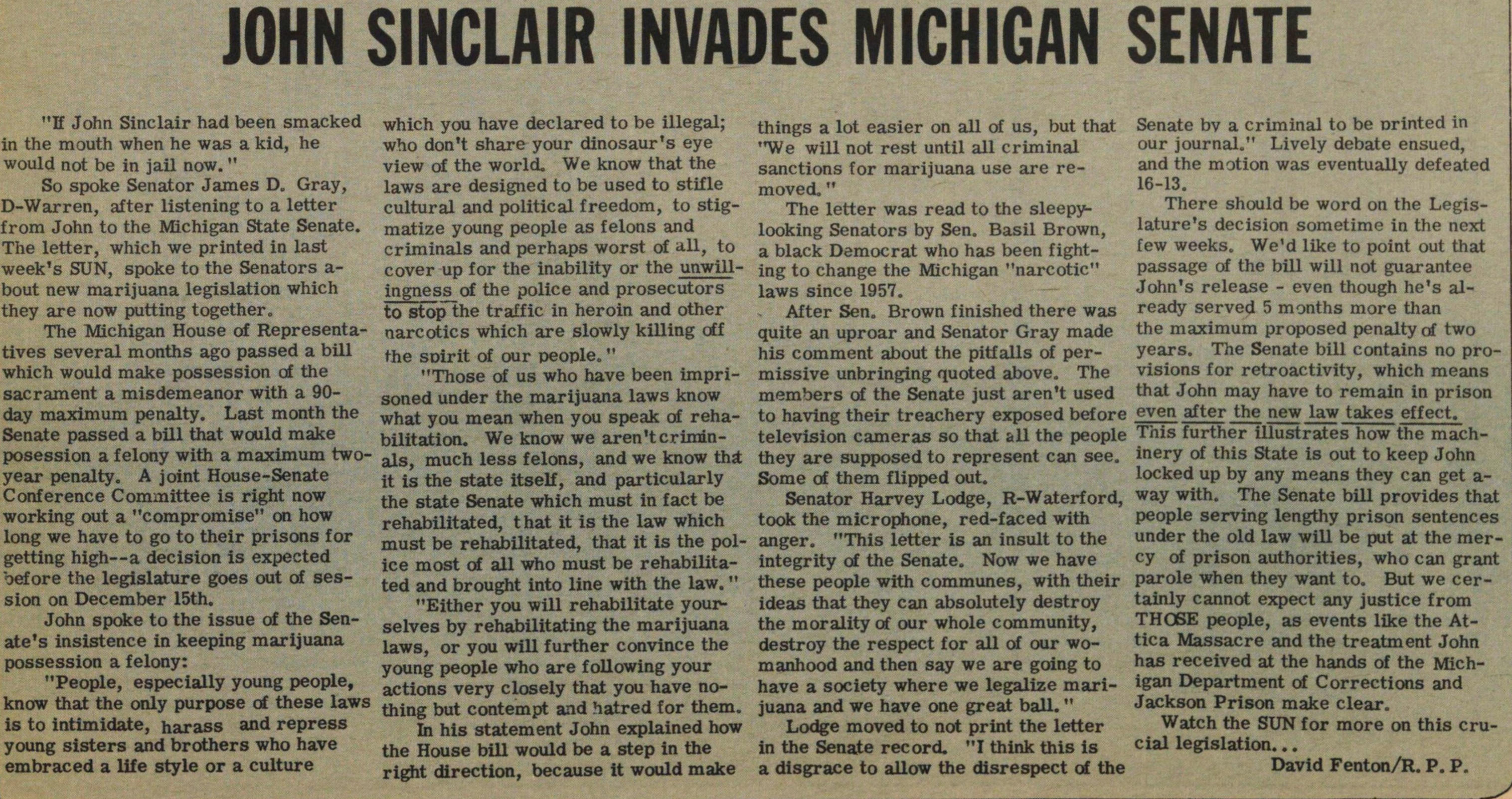 "K John Sinclair had been smacked in the mouth when he was a kid, he would not be in jaü now. " So spoke Senator James D. Gray, D-Warren, after listening to a letter f rom John to the Michigan State Senate. The letter, which we printed in last week's SUN, spoke to the Senators about new marijuana legislation which they are now putting together. The Michigan House of Representatives several months ago passed a bilí which would make possession of the sacrament a misdemeanor with a 90day maximum penalty. Last month the Senate passed a bilí that would make posession a f elony with a maximum twoyear penalty. A joint House -Senate Conference Committee is right now working out a "compromise" on how long we have to go to their prisons f or getting high - a decisión is expected before the legislature goes out of session on December 15th. John spoke to the issue of the Senate's insistence in keeping marijuana possession a f elony: "People, especially young people, know that the only purpose of these laws is to intimidate, harass and repress young sisters and brothers who have embraced a Ufe style or a culture which you have declared to be illegal; who don 't share your dinosaur's eye view of the world. We know that the laws are designed to be used to stifle cultural and political freedom, to stigmatize young people as felons and crimináis and perhaps worst of all, to cover up for the inability or the unwillingness of the pólice and prosecutors to stop the traffic in heroin and other narcotics which are slowly killing off the SDirit of our people. " "Those of us who have been imprisoned under the marijuana laws know what you mean when you speak of rehabilitation. We know we aren 't crimináis, much less felons, and we know thá it is the state itself , and particularly the state Senate which must in fact be rehabilitated, that it is the law which must be rehabilitated, that it is the police most of all who must be rehabilitated and brought into line with the law. " "Either you will rehabilítate yourselves by rehabilitating the marijuana laws, or you will further convince the young people who are f ollowing your actions very closely that you have nothing but contempt and hatred for them. In his statement John explained how the House bilí would be a step in the right direction, because it would make things a lot easier on all of us, but that "We will not rest until all criminal sanctions for marijuana use are removed. " The letter was read to the sleepylooking Senators by Sen. Basil Brown, a black Democrat who has been fighting to change the Michigan "narcotic" laws since 1957. Aíter Sen. Brown finished there was quite an uproar and Senator Gray made his comment about the pitfalls of permissive unbringing quoted above. The members of the Senate just aren't used to having their treachery exposed bef ore televisión cameras so that all the people they are supposed to represent can see. Some oí them flipped out. Senator Harvey Lodge, R-Waterford, took the microphone, red-faced with anger. "This letter is an insult to the integrity of the Senate. Now we have these people with communes, with their ideas that they can absolutely destroy the morality of our whole community, destroy the respect for all of our womanhood and then say we are going to have a society where we legalize marijuana and we have one great ball. " Lodge moved to not print the letter in the Senate record. "I think this is a disgrace to allow the disrespect of the Senate bv a criminal to be Drinted in our journal." Lively debate ensued, and the motion was eventually defeated 16-13. There should be word on the Legislature's decisión sometime in the next few weeks. We'd like to point out that passage of the bill will not guarantee John's release - even though he's already served 5 months more than the maximum proposed penalty oí two years. The Senate bill contains no provisions for retroactivity, which means that John may have to remain in prison even after the new law takes effect. This further illustrates how the machinery of this State is out to keep John locked up by any means they can get away with. The Senate bill provides that people serving lengthy prison sentences under the old law will be put at the mercy of prison authorities, who can grant parole when they want to. But we certainly cannot expect any justice from THOSE people, as events like the Attica Massacre and the treatment John has received at the hands of the Michigan Department of Corrections and Jackson Prison make clear. Watch the SUN for more on this crucial leglslation. . .