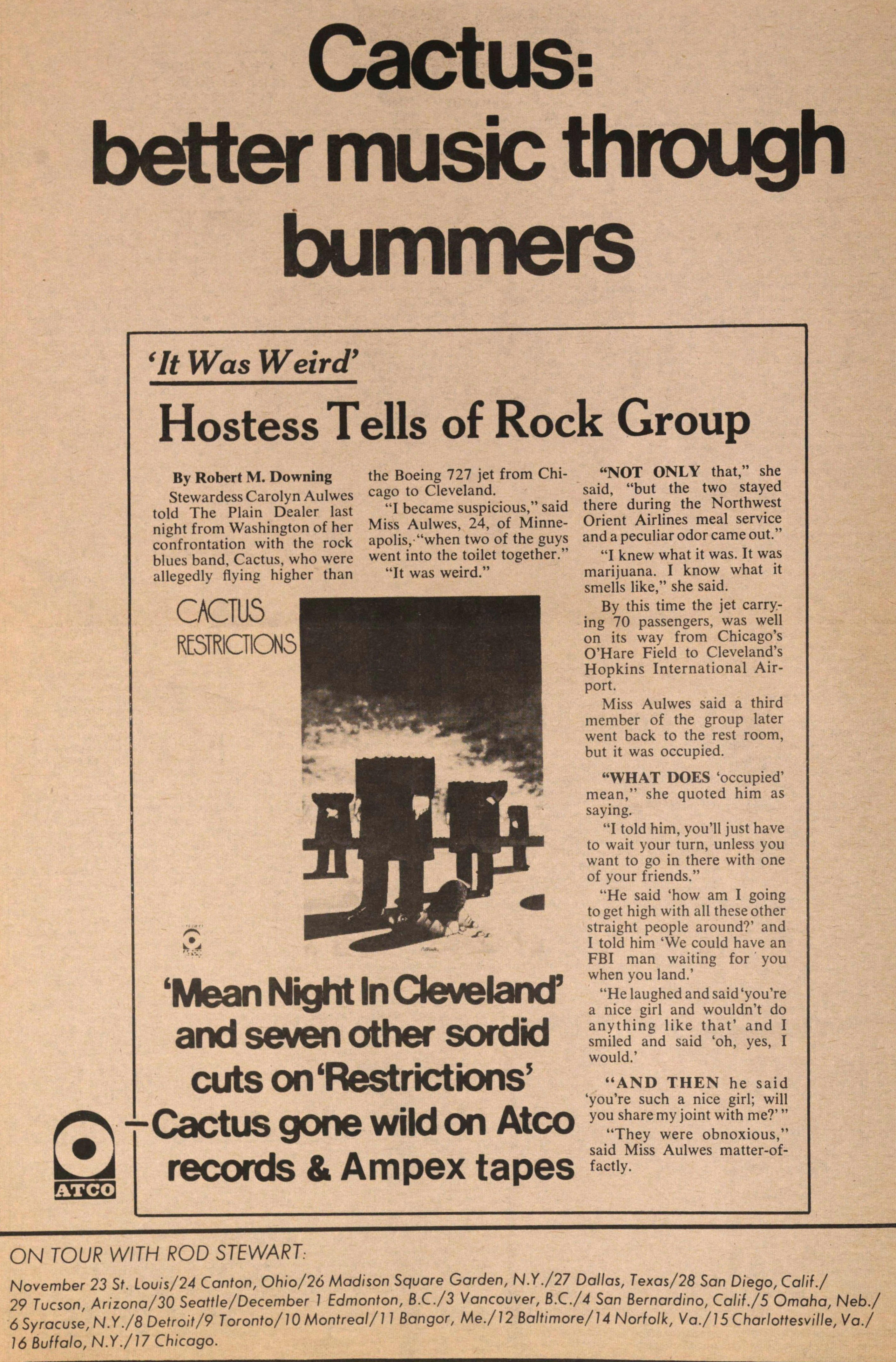 Stewardess Carolyn Aulwes told The Plain Dealer last night from Washington of her confrontation with the rock blues band, Cactus, who were allegedly flying higher than the Boeing 727 jet from Chicago to Cleveland. "I became suspicious," said Miss Aulwes, 24, of Minneapolis, "when two of the guys went into the toilet together." "It was weird." "NOT ONLY that," she said, "but the two stayed there during the Northwest Oriënt Airlines meal service and a peculiar odor came out." "I knew what it was. It was marijuana. I know what it smells like," she said. By this time the jet carrying 70 passengers, was well on its way from Chicago's O'Hare Field to Cleveland's Hopkins International Airport. Miss Aulwes said a third member of the group later went back to the rest room, but it was occupied. "WHAT DOES 'occupied' mean," she quoted him as saying. "I told him, you'll just have to wait your turn, unless you want to go in there with one of your friends." "He said 'how am I going to get high with all these other straight people around?' and I told him 'We could have an FBI man waiting for you when you land.' "He laughed and said 'you're a nice girl and wouldn't do anything like that' and I smiled and said 'oh, yes, I would.' "AND THEN he said 'you're such a nice girl; will you share my joint with me?' " "They were obnoxious," said Miss Aulwes matter-offactly. 'Mean Night In Cleveland' and seven other sordíd cuts on'Restrictions' -Cactus gone wild on Ateo records & Ampex tapes ON TOUR WITH ROD STEWART: November 23 St. Louis24 Cantón, Ohio2ó Madison Square Garden, N.Y.27 Dallas, Texas28 San Diego, Calif. 29 Tucson, Arizona30 SeattleDecember 1 Edmonton, B.C.3 Vancouver, B.C.4 San Bernardina, Calif. 5 Omaha, Neb. 6 Syracusé, N.Y .8 Detroit 9 TorontoW Montreal1 1 Bangor, Me. 12 Baltimore14 Norfolk, Va.15Cbarlottesville,Va. 16 Buffalo, N.Y. 17 Chicago.