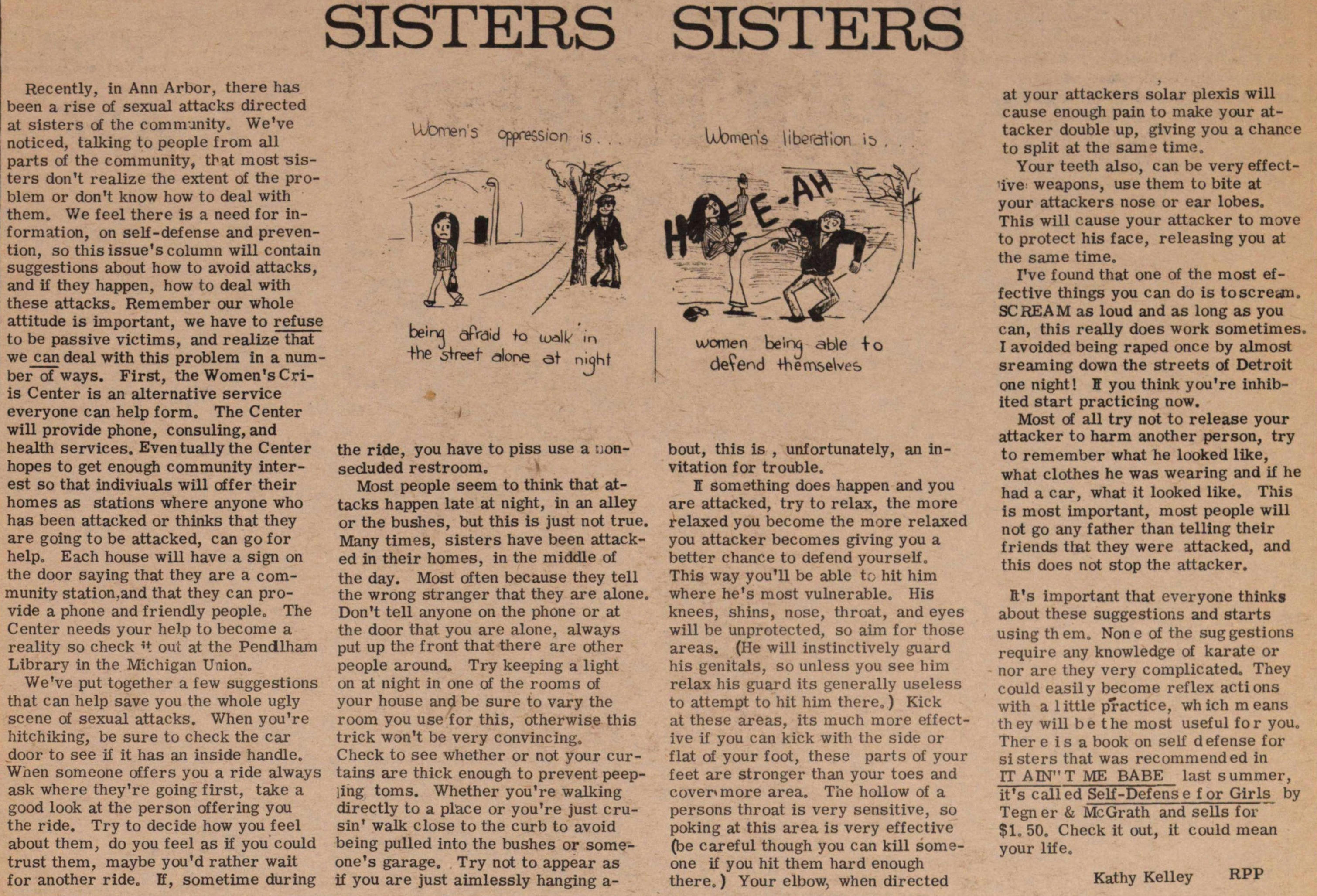 Recently, in Ann Arbor, there has been a rise of sexual attacks directed at sisters oí the community. We've noticed, talking to people from all parts of the community, that most sisters don 't realize the extent of the problem or don 't know how to deal with them. We feel there is a need for information, on self-defense and prevention, so thisissue's column will contain suggestions about how to avoid attacks, and if they happen, how to deal with these attacks. Remember our whole attitude is important, we have to refuse to be passive victims, and realize that we can deal with this problem in a number of ways. First, the Women'sCriis Center is an alternative service everyone can help form. The Center will provide phone, consuling, and health services. Even tually the Center hopes to get enough community interest so that indiviuals will offer their homes as stations where anyone who has been attacked or thinks that they are going to be attacked, can go for help. Each house will have a sign on the door saying that they are a community station.and that they can provide a phone and f riendly people. The Center needs your help to become a reality so check H out at the Pendlham Library in the Michigan Union. We've put together a few suggestions that can help save you the whole ugly scène of sexual attacks. When you're hitchiking, be sure to check the car door to see if it has an inside handle. When someone offers you a ride always ask where they're going first, take a good look at the person offering you the ride. Try to decide how you feel about them, do you feel as if you could trust them, maybe you'd rather wait for another ride. K, sometime during the ride, you have to piss use a :;onsecluded restroom. Most people seem to think that attacks happen late at night, in an alley or the bushes, but this is just not true. Many times, sisters have been attacked in their homes, in the middle of the day. Most often because they teil the wrong stranger that they are alone. Don't teil anyone on the phone or at the door that you are alone, always put up the front that there are other people around. Try keeping a light on at night in one of the rooms of your house and be sure to vary the room you use for this, otherwise this trick won't be very convincing. Check to see whether or not your curtains are thick enough to prevent peep]ing toms. Whether you're walking directly to a place or you're just crusin' walk close to the curb to avoid being pulled into the bushes or someone's garage. Try not to appear as if you are just aimlessly hanging bout, this is , unfortunately, an invitation for trouble. I something does happen and you are attacked, try to relax, the more relaxed you become the more relaxed you attacker becomes giving you a better chance to defend yourself. This way you'll be able to hit him where he's most vulnerable. His knees, shins, nose, throat, and eyes will be unprotected, so aim for those areas. (He will instinctively guard his genitals, so unless you see him relax his guard its generally useless to attempt to hit him there. ) Kick at these areas, its much more effective if you can kick with the side or flat of your foot, these parts of your feet are stronger than your toes and cover more area. The hollow of a persons throat is very sensitive, so poking at this area is very effective (be careful though you can kill someone if you hit them hard enough there. ) Your elbow, when directed y at your attackers solar plexis will cause enough pain to make your attacker doublé up, giving you a chance to split at the same time. Your teeth also, can be very effective weapons, use them to bite at your attackers nose or ear lobes. This will cause your attacker to move to protect his face, releasing you at the same time. Tve f ound that one of the most effective things you can do is toscreaii. SC REA M as loud and as long as you can, this really does work sometimes. I avoided being raped once by almost sreaming down the streets of Detroit one night! I you think you're inhibited start practicing now. Most of all try not to release your attacker to harm another person, try to remember what he looked like, what clothes he was wearing and if he had a car, what it looked like. This is most important, most people will not go any father than telling their friends that they were attacked, and this does not stop the attacker. S's important that everyone thinks about these suggestions and starts using them. None of the suggestions require any knowledge of karate or nor are they very complicated. They could easily become reflex actions with a little practice, whichmeans they will be the most useful for you. Ther e i s a book on self defense for sisters that was recommended in IT AIN"T ME BABE last summer, it's called Self -Defense for Girls by Tegn er & McGrath and sells for $1. 50. Check it out, it could mean your life.