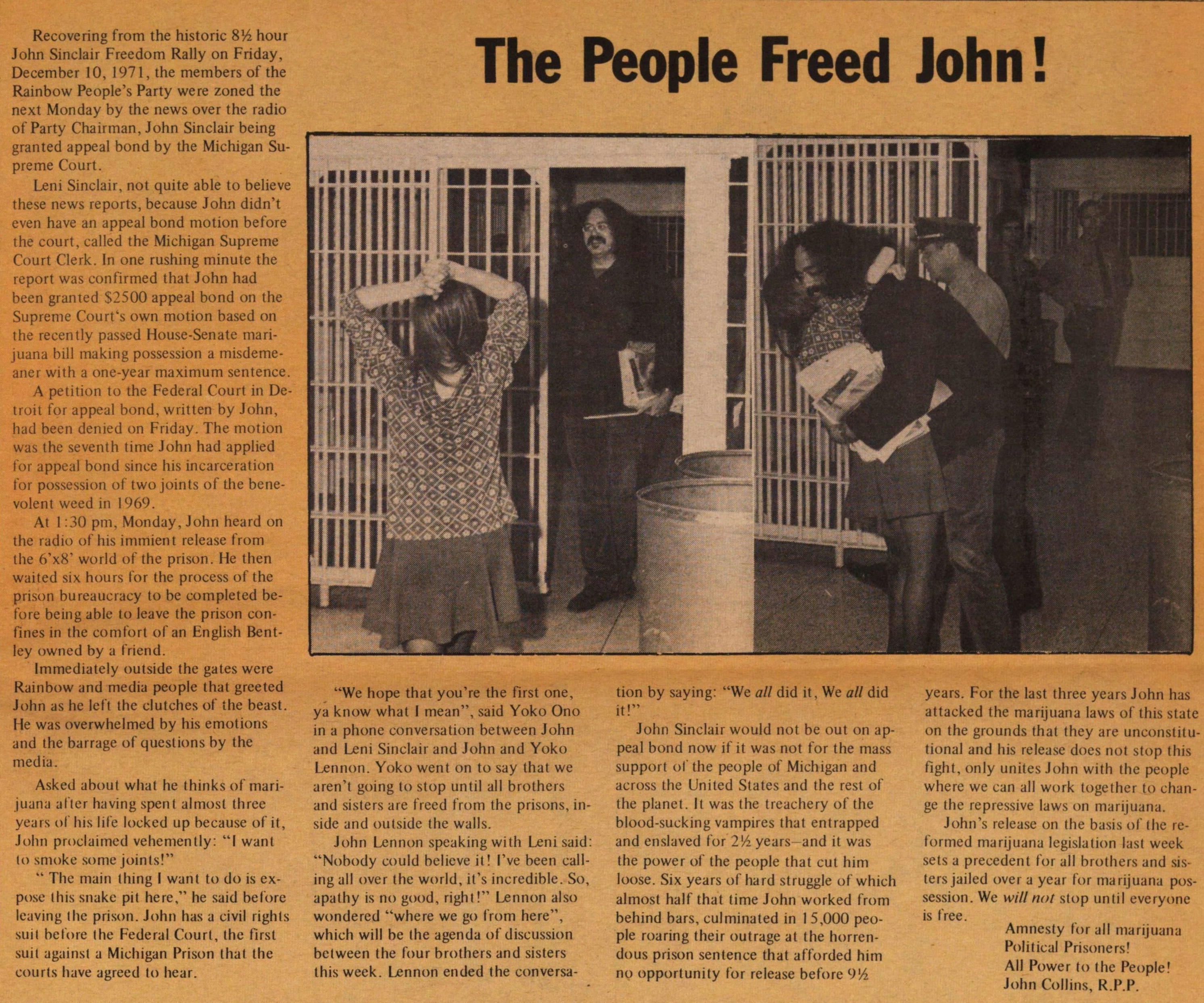 Recovering from the historic 8.5 hour John Sinclair Freedom Rally on Friday, December 10, 1 97 1 , the members of the Rainbow People's Party we rezoned the next Monday by the news over the radio of Party Chairman, John Sinclair being granted appeal bond by the Michigan Supreme Court. Leni Sinclair, not quite able to believe these news reports, because John didn't even have an appeal bond motion before the court, called the Michigan Supreme Court Clerk. In one rushing minute the report was confirmed that John had been granted $2500 appeal bond on the Supreme Court's own motion based on the recently passed House-Senate marijuana bill making possession a misdemeaner with a one-year maximum sentence. A petition to the Federal Court in Detroit for appeal bond, written by John, had been denied on Friday. The motion was the seventh time John had applied for appeal bond since his incarceration for possession of two joints of the benevolent weed in 1969. At 1:30 pm, Monday, John heard on the radio of his imminent release from the 6'x8' world of the prison. He then waited six hours tor the process of the prison bureaucracy to be completed before being able to leave the prison confines in the comfort of an English Bentley owned by a friend. Immediately outside the gates were Rainbow and media people that greeted John as he felt the clutches of the beast. He was overwhelmed by his emotions and the barrage of questions by the media. Asked about what he thinks of marijuana alter having spent almost three years of his life locked up because of it, John proclaimed vehemently: "I want lo smoke some joints!" " The main thing I want to do is expose this snake pit here," he said before leaving the prison. John has a civil rights snit before the Federal Court, the first suit against a Michigan Prison that the courts have agreed to hear. "We hope that you're the first one, ya know what I mean", said Yoko Ono in a phone conversation between John and Leni Sinclair and John and Yoko Lennon. Yoko went on to say that we aren't going to stop until all brothers and sisters are freed from the prisons, inside and outside the walls. John Lennon speaking with Leni said: "Nobody could believe it! l've been calling all over the world, it's incredible. So, apathy is no good, right!" Lennon also wondered "where we go from here", which will be the agenda of discussion between the four brothers and sisters this week. Lennon ended the conversation by saying: "We all did it. We all did it!" John Sinclair would be out on appeal bond now if it was not for the mass support of the people of Michigan and across the United States and the rest of the panel. It was the treachery of the blood-sucking vampires that entrapped and enslaved tor 2.5 years-and it was the power of the people that cut him loose. Six years of hard struggle of which almost half that time John worked from behind bars, culminated in 15,000 people roaring their outrage at the horrendous prison sentence that afforded him no opportunity for release before 9.5 years. For the last three years John has attacked the marijuana laws of this state on the grounds that they are unconstitutional and his release does not slop this fight, only unites John with the people where we can all work together to change the repressive laws on marijuana. John 's release on the basis of the reformed marijuana legislation last week sets a precedent for all brothers and sisters jailed over a year for marijuana possession. We will not stop until everyone is free.

Amnesty for all marijuana Political Prisoners! All Power to the People! John Collins R.P.P.