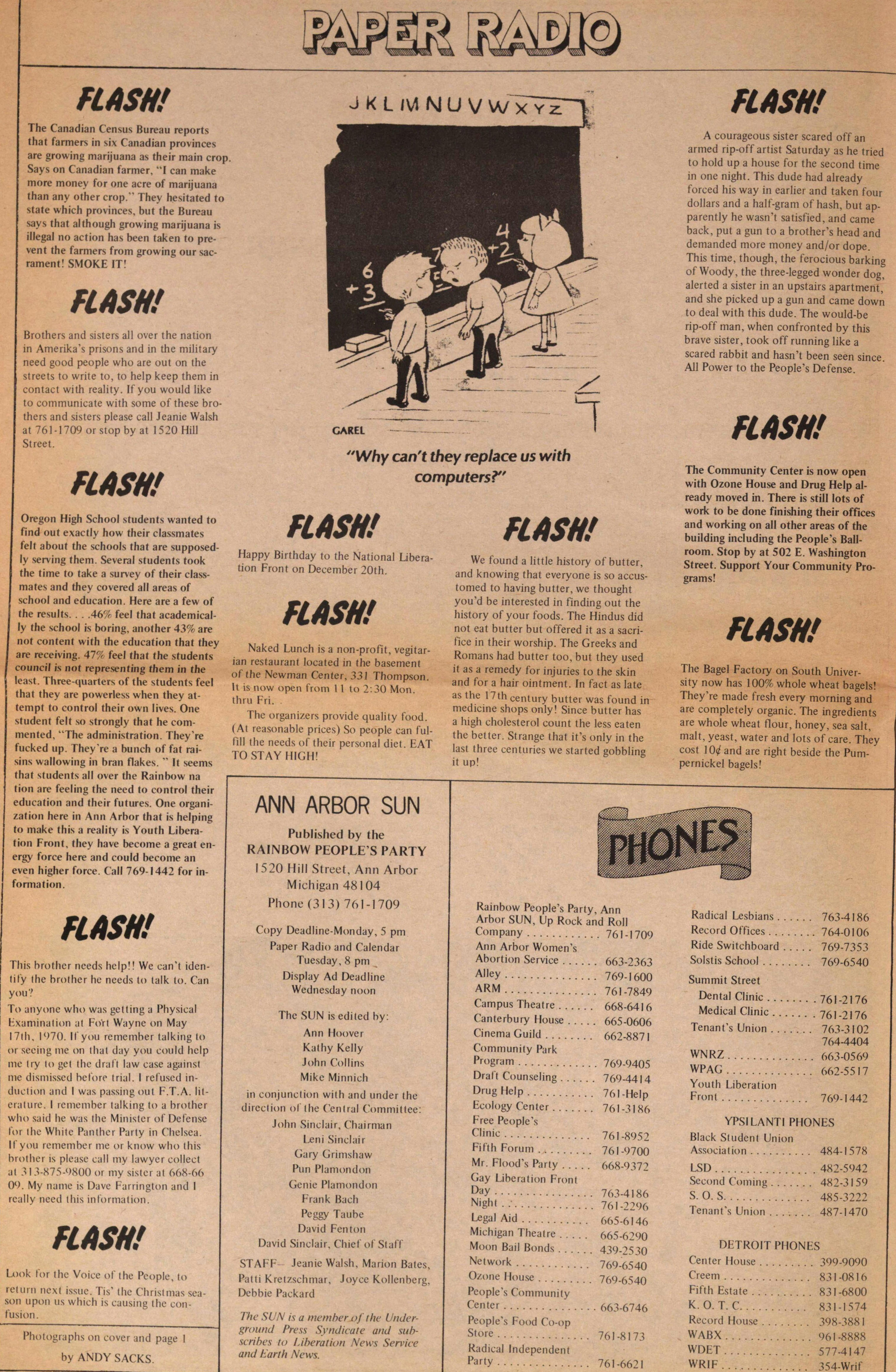 The Canadian Census Bureau reports that farmers in six Canadian provinces are growing marijuana as their main crop. Says on Canadian farmer, "I can make more money for one acre of marijuana than any other crop." They hesitated to state which provinces. but the Bureau says that although growing marijuana is illegal no action has been taken to prevent the farmers from growing our sacrament! SMOKE IT!

Brothers and sisters all over the nation in Amerika's prisons and in the military need good people who are out on the streets to write to, to help keep them in contact with reality. If you would like to communicate with some of these brothers and sisters please cali Jeanie Walsh at 761-1709 or stop by at 1520 Hill Street.

Oregon High School students wanted to find out exactly how their classmates felt about the schools that are supposedly serving them. Several students took the time to take a survey of their classmates and they covered all areas of school and education. Here are a few of the results. . . .46% feel that academically the school is boring, another 43% are not content with the education that they are receiving;. 47% feel that the students council is not representing them in the least. Three-quarters of the students feel that they are powerless when they attempt to control their own lives. One student felt so strongly that he commented, "The administraron. They re fucked up. They're a bunch fat raisins wallowing in bran flakes. " It seems that students all over the Rainbow nation are feeling the need to control their education and their futures. One organization here in Ann Arbor that is helping to make this a reality is Youth Liberation Front, they have become a great energy force here and could become an even higher force. Call 769-1442 for information.

FLASH! This brother needs help!! We can't identify the brother he needs to talk to. Can you? To anyone who was getting a Physical examination at Fort Wayne on May 17th, 1970. If you remember talking to or seeing me on that day you could help me try to get the draft law case against me dismissed before trial. I refused induction and I was passing out F.T.A. literature. I remember talking to a brother who said he was the Minister of Defense for the White Panther Party in Chelsea. If you remember me or know who this brother is please call my lawyer collect at 3138759800 or my sister at 668-6609. My name is Dave Farrington and I really need this information.

FLASH! Look for the Voice of the People, to return next issue, Tis' the Christmas season upon us which is causing the confusion.

FLASH! Naked Lunch is a non-profit, vegitarian restaurant located in the basement of the Newman Center, 331 Thompson. It is now open from 11 to 2:30 Mon. thru Fri. The organizers provide quality food, (At reasonable prices) So people can fulfill the needs of their personal diet. EAT TO STAY HIGH!

We found a little history of butter, and knowing that everyone is so accustomed to having butter, we thought you'd be interested in finding out the history of your foods. The Hindus did not eat butter but offered it as a sacrifice in their worship. The Greeks and Romans had butter too, but they used it as a remedy for injuries to the skin and for a hair ointment. In fact as late as the 17th century butter was found in medicine shops only! Since butter has a high cholesterol count the less eaten the better. Strange that it's only in the last three centuries we started gobbling it up!

A courageous sister scared off an armed rip-off artist Saturday as he tried to hold up a house for the second time in one night. This dude had already forced his way in earlier and taken four dollars and a half-gram of hash, but apparently he wasn't satisfied, and came back, put a gun to a brother's head and demanded more money and or dope. This time, though, the ferocious barking of Woody, the three-legged wonder dog, alerted a sister in an upstairs apartment, and she picked up a gun and came down to deal with this dude. The would-be rip-off man, when confronted by this brave sister, took off running like a scared rabbit and hasn't been seen since. All Power to the People's Defense.

FLASH! The Community Center is now open with Ozone House and Drug Help already moved in. There is still lots of work to be done finishing their offices and working on all other areas of the building including the People's Ballroom. Stop by at 502 E. Washington Street. Support Your Community Programs!

FLASH! The Bagel Factory on South University now has 100% whole wheat bagels! They're made fresh every morning and are completely organic. The ingredients are whole wheat flour, honey, sea salt, malt, yeast, water and lots of care. They cost 10cents and are right beside the Pumpernickel bagels! Photographs on cover and page 1 by andy sacks