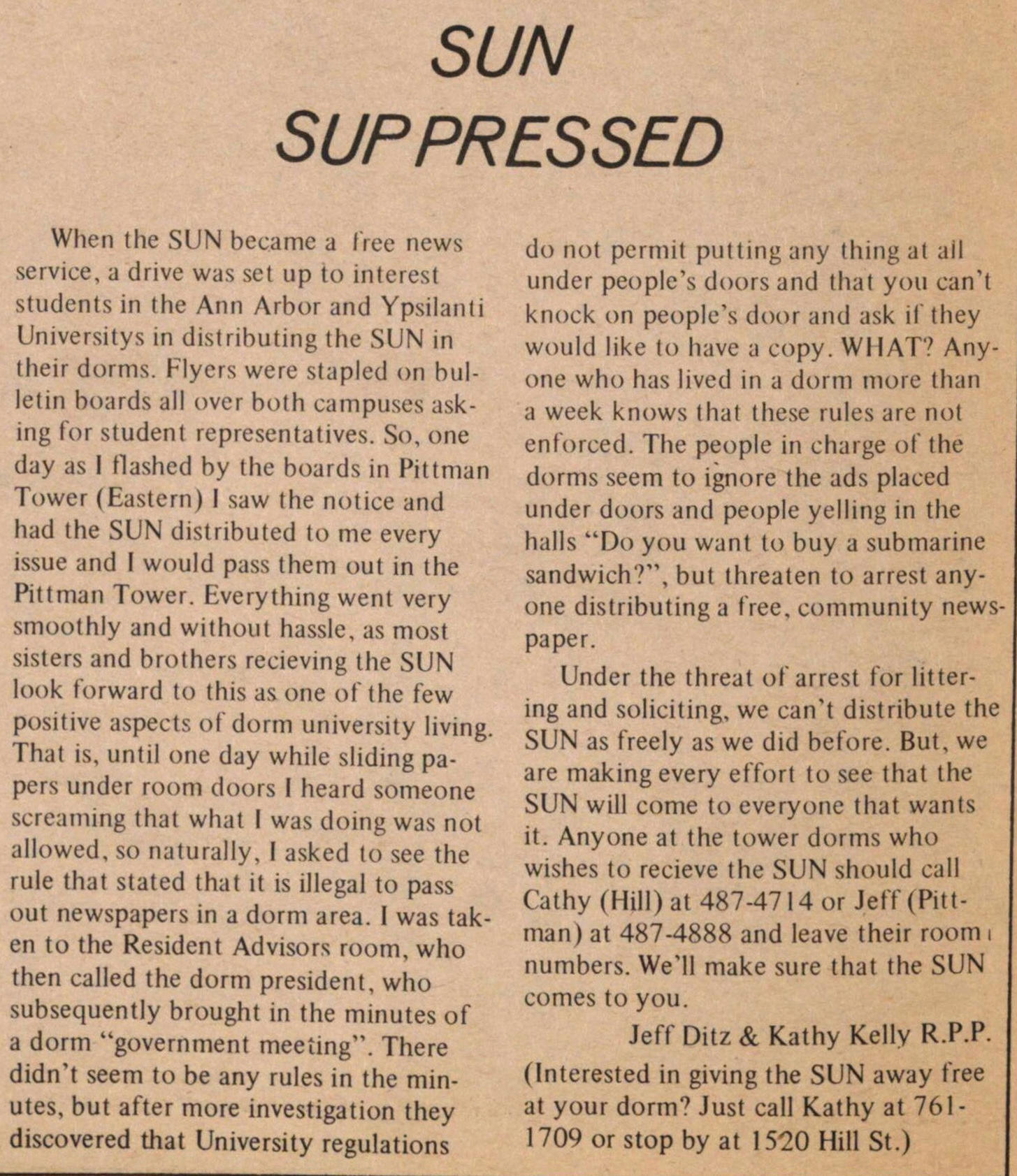 When the SUN became a free news service, a drive was set up to interest students in the Ann Arbor and Ypsilanti University's in distributing the SUN in their dorms. Flyers were stapled on bulletin boards all over both campuses asking for student representatives. So, one day as I flashed by the boards in Pittman Tower (Eastern) I saw the notice and had the SUN distributed to me every issue and I would pass them out in the Putman Tower. Everything went very smoothly and without hassle, as most sisters and brothers receiving the SUN look forward to this as one of the few positive aspects of'dorm university living. That is, until one day while sliding papers under room doors I heard someone screaming that what I was doing was not allowed, so naturally, I asked to see the rule that stated that it is illegal to pass out newspapers in a dorm area. I was taken to the Resident Advisors room, who then called the dorm president, who subsequently brought in the minutes of a dorm "government meeting". There didn't seem to be any rules in the minutes, but after more investigation they discovered that University regulations do not permit putting any thing tall under people's doors and then you can't knock on people's door and ask if they would like to have a copy. WHAT? Anyone who has lived in a dorm more than a week knows that these rules are not enforced. The people in charge of the dorms seem to ignore the ads placed under doors and people yelling in the halls "Do you want to buy a submarine sandwich?", but threaten to arrest anyone distributing a tree. community newspaper. Under the threat of arrest for littering and soliciting, we can't distribute the SUN as freely as we did before. But, we are making every effort to see that the SUN will come to everyone that wants it. Anyone at the tower dorms who wishes to recieve the SUN should call Cathy (Hill) at 487-4714 or JetT (Pittman) at 487-4888 and leave their room i numbers. We'll make sure that the SUN comes to you. R.P.P. (Interested in giving the SUN away tree at your dorm? Just call Kathy at 761 - 1709 or stop by at 1520 Hill St.)