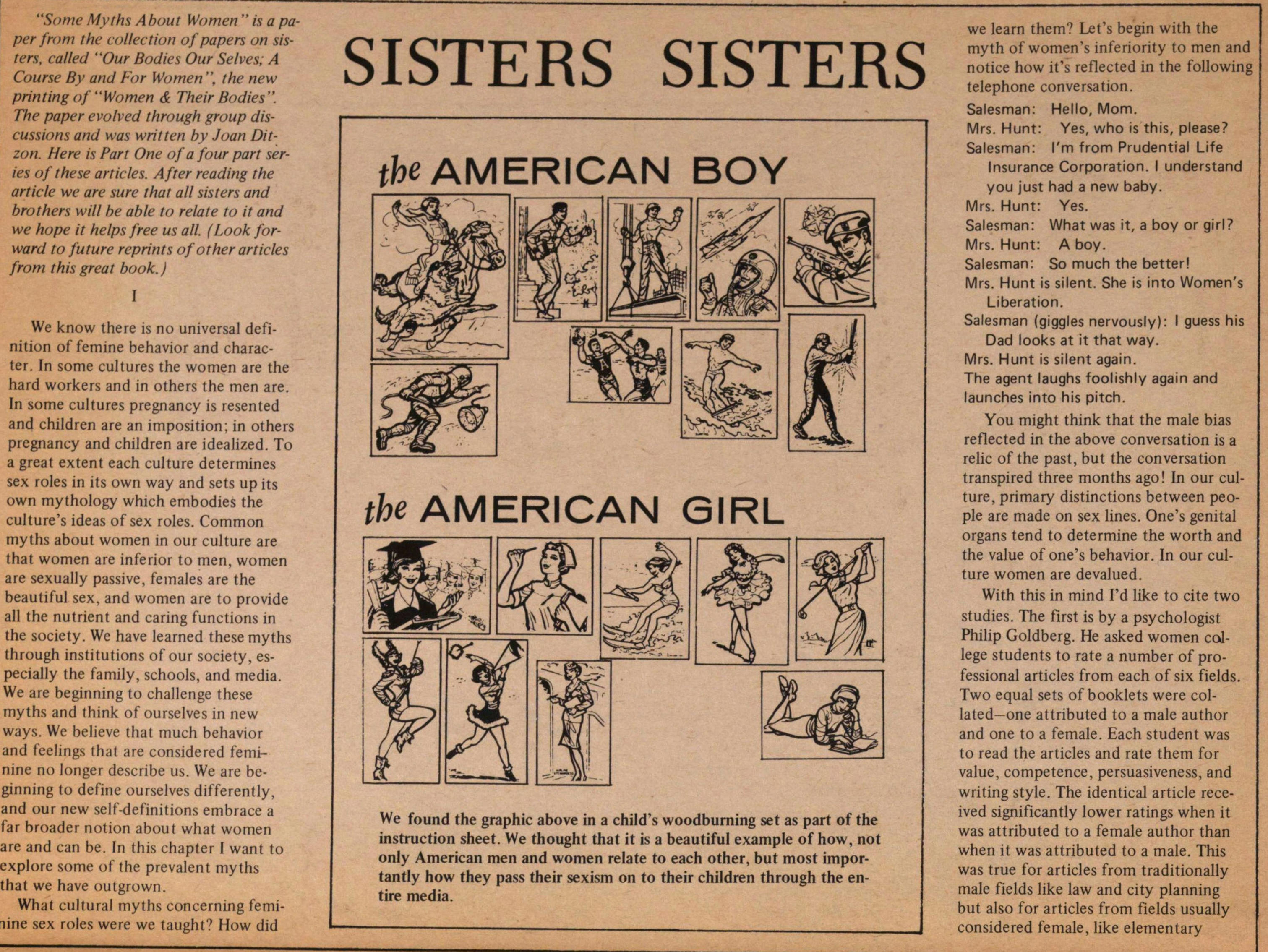 "Some Myths About Women " is a paper from the collection of papers on sisters, called "Our Bodies Our Selves; A Course By and For Women ", the new printing of " Women & Their Bodies ". The paper evolved through group discussions and was written by Joan Ditzon. Here is Part One of a four part series of these articles. After reading the article we are sure that all sisters and brothers will be able to relate to it and we hope it helps free us all. (Look forward to future reprints of other articles from this great book. )

We know there is no universal definition of femine behavior and character. In some cultures the women are the hard workers and in others the men are. In some cultures pregnancy is resented and children are an imposition; in others pregnancy and children are idealized. To a great extent each culture determines sex roles in its own way and sets up its own mythology which embodies the culture's ideas of sex roles. Common myths about women in our culture are that women are inferior to men, women are sexually passive, females are the beautiful sex, and women are to provide all the nutrient and caring functions in the society. We have learned these myths through institutions of our society, especially the family, schools, and media. We are beginning to challenge these myths and think of ourselves in new ways. We believe that much behavior and feelings that are considered feminine no longer describe us. We are beginning to define ourselves differently, and our new self-definitions embrace a far broader notion about what women are and can be. In this chapter I want to explore some of the prevalent myths that we have outgrown. What cultural myths concerning feminine sex roles were we taught? How did we learn them? Let's begin with the myth of women's inferiority to men and notice how it's reflected in the following telephone conversation. Salesman: Hello, Mom. Mrs. Hunt: Yes, who is this, please? Salesman: l'm from Prudential Life Insurance Corporation. I understand you just had a new baby. Mrs. Hunt: Yes. Salesman: What was it, a boy or girl? Mrs. Hunt: A boy. Salesman: So much the better! Mrs. Hunt is silent. She is into Women's Liberation. Salesman (giggles nervously): I guess his Dad looks at it that way. Mrs. Hunt is silent again. The agent laughs foolishly again and launches into his pitch. You might think that the male bias reflected in the above conversation is a relic of the past, but the conversation transpired three months ago! In our culture, primary distinctions between people are made on sex lines. One's genital organs tend to determine the worth and the value of one's behavior. In our culture women are devalued. With this in mind I'd like to cite two studies. The first is by a psychologist Philip Goldberg. He asked women college students to rate a number of professional articles from each of six fields. Two equal sets of booklets were collated- one attributed to a male author and one to a female. Each student was to read the articles and rate them for value, competence, persuasiveness, and writing style. The identical article received significantly lower ratings when it was attributed to a female author than when it was attributed to a male. This was true for articles from traditionally male fields like law and city planning but also for articles from fields usually considered female, like elementary We found the graphic above in a child's woodburning set as part of the instruction sheet. We thought that it is a beautiful example of how, not only American men and women relate to each other, but most importantly how they pass their sexism on to their children through the entire media. the AMERICAN BOY &  AMERICAN GIRL