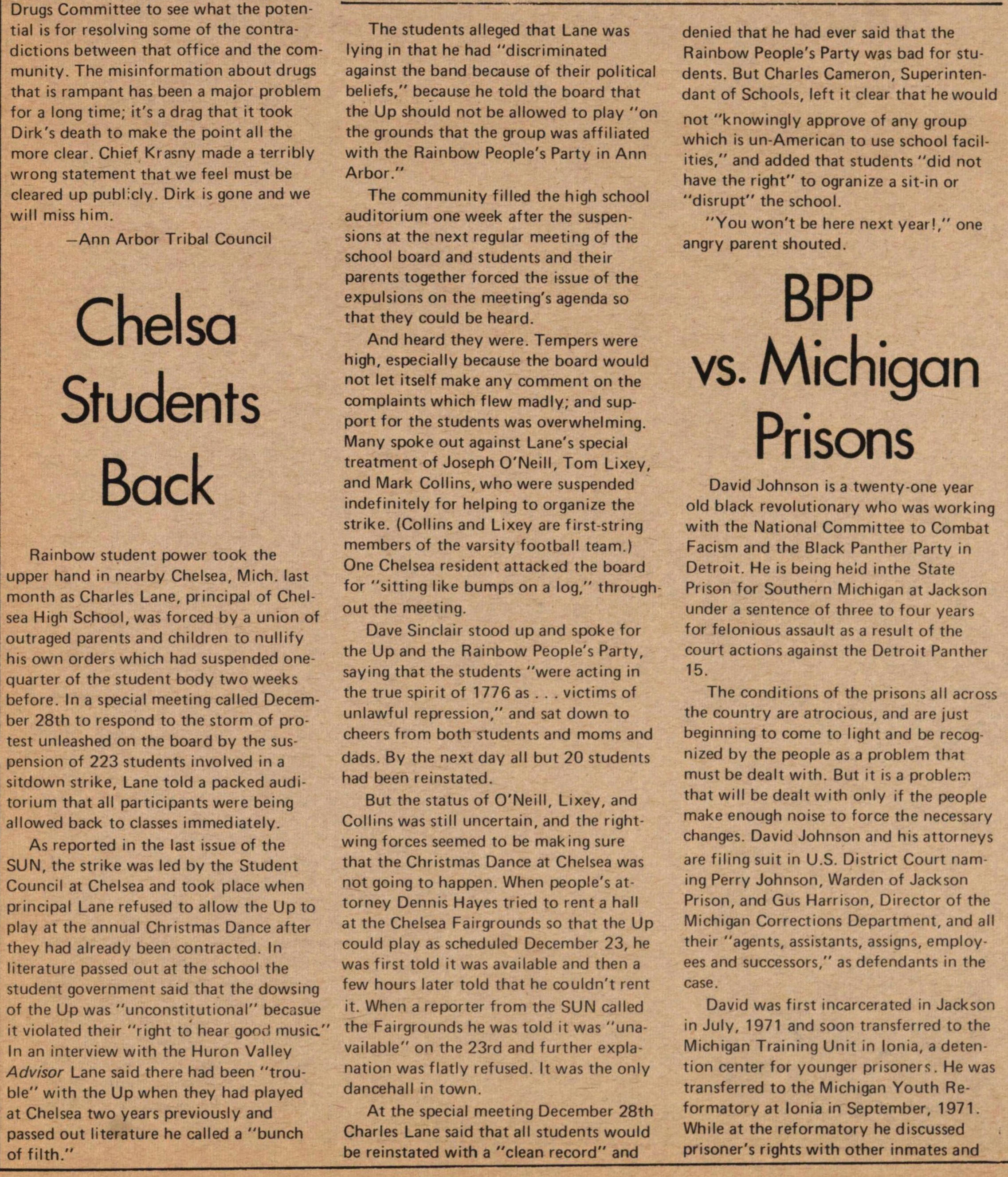 Rainbow student power took the upper hand in nearby Chelsea, Mich. last month as Charles Lane, principal of Chelsea High School, was forced by a union of outraged parents and children to nullify his own orders which had suspended one quarter of the student body two weeks before. In a special meeting called December 28th to respond to the storm of protest unleashed on the board by the suspension of 223 students involved in a sitdown strike, Lane told a packed auditorium that all participants were being allowed back to classes immediately.

As reported in the last issue of the SUN, the strike was led by the Student Council at Chelsea and took place when principal Lane refused to allow the Up to play at the annual Christmas Dance after they had already been contracted. In literature passed out at the school the student government said that the dowsing of the Up was "unconstitutional" becasue it violated their "right to hear good music." In an interview with the Huron Valley Advisor Lane said there had been "trouble" with the Up when they had played at Chelsea two years previously and passed out literature he called a "bunch of filth."

The students alleged that Lane was lying in that he had "discriminated against the band because of their political beliefs," because he told the board that the Up should not be allowed to play "on the grounds that the group was affiliated with the Rainbow People's Party in Ann Arbor."

The community filled the high school auditorium one week after the suspensions at the next regular meeting of the school board and students and their parents together forced the issue of the expulsions on the meeting's agenda so that they could be heard.

And heard they were. Tempers were high, especially because the board would not let itself make any comment on the complaints which flew madly; and support for the students was overwhelming. Many spoke out against Lane's special treatment of Joseph O'Neill, Torn Lixey, and Mark Collins, who were suspended indefinitely for helping to organize the strike. (Collins and Lixey are first-string members of the varsity football team.) One Chelsea resident attacked the board for "sitting like bumps on a log," throughout the meeting.

Dave Sinclair stood up and spoke for the Up and the Rainbow People's Party, saying that the students "were acting in the true spirit of 1776 as ... victims of unlawful repression," and sat down to cheers from both students and moms and dads.

By the next day all but 20 students had been reinstated. But the status of O'Neill, Lixey, and Collins was still uncertain, and the rightwing forces seemed to be making sure that the Christmas Dance at Chelsea was not going to happen. When people's attorney Dennis Hayes tried to rent a hall at the Chelsea Fairgrounds so that the Up could play as scheduled December 23, he was first told it was available and then a few hours later told that he couldn't rent it. When a reporter from the SUN called the Fairgrounds he was told it was "unavailable" on the 23rd and further explanation was flatly refused. It was the only dancehall in town.

At the special meeting December 28th Charles Lane said that all students would be reinstated with a "clean record" and denied that he had ever said that the Rainbow People's Party was bad for students. But Charles Cameron, Superintendant of Schools, left it clear that he would not "knowingly approve of any group which is un-American to use school facilities," and added that students "did not have the right" to ogranize a sit-in or "disrupt" the school. "You won't be here next year!," one angry parent shouted.