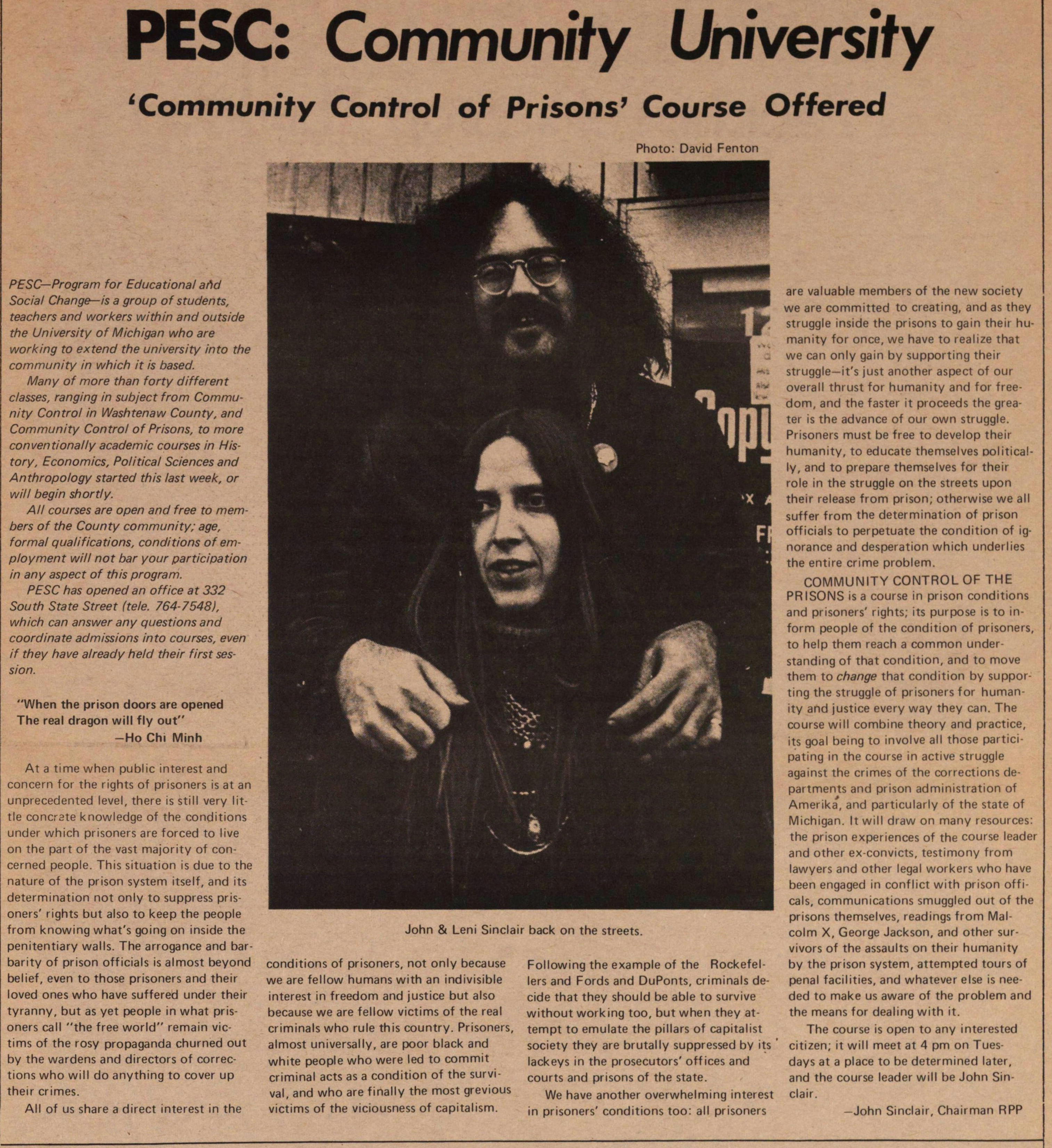 PESC- Program for Educational and Social Change - is a group of students, teachers and workers within and outside the University of Michigan who are working to extend the university into the community in which it is based.

Many of more than forty different classes, ranging in subject from Community Control in Washtenaw County, and Community Control of Prisons, to more conventionally academic courses in History, Economics, Political Sciences and Anthropology started this last week, or will begin shortly.

All courses are open and free to members of the County community; age, formal qualifications, conditions of employment will not bar your participation in any aspect of this program.

PESC has opened an office at 332 South State Street (tele. 764-7548), which can answer any questions and coordinate admissions into courses, even if they have already held their first session.

At a time when public interest and concern for the rights of prisoners is at an unprecedented level, there is still very little concrete knowledge of the conditions under which prisoners are forced to live on the part of the vast majority of concerned people. This situation is due to the nature of the prison system itself, and its determination not only to suppress prisoners' rights but also to keep the people from knowing what's going on inside the penitentiary walls. The arrogance and barbarity of prison officials is almost beyond belief, even to those prisoners and their loved ones who have suffered under their tyranny, but as yet people in what prisoners cali "the free world" remain victims of the rosy propaganda churned out by the wardens and directors of corrections who will do anything to cover up their crimes.

All of us share a direct interest in the conditions of prisoners, not only because we are fellow humans with an indivisible interest in freedom and justice but also because we are fellow victims of the real criminals who rule this country. Prisoners, almost universally, are poor black and white people who were led to commit criminal acts as a condition of the survival, and who are finally the most grevious victims of the viciousness of capitalism.

Following the example of the Rockefellers and Fords and DuPonts, criminals decide that they should be able to survive without working too, but when they attempt to emulate the pillars of capitalist society they are brutally suppressed by its lackeys in the prosecutors' offices and courts and prisons of the state.

We have another overwhelming interest in prisoners' conditions too: all prisoners are valuable members of the new society we are committed to creating, and as they struggle inside the prisons to gain their humanity for once, we have to realize that we can only gain by supporting their struggle - it's just another aspect of our overall thrust for humanity and for freedom, and the faster it proceeds the greater is the advance of our own struggle. Prisoners must be free to develop their humanity, to educate themselves politically, and to prepare themselves for their role in the struggle on the streets upon their release from prison; otherwise we all suffer from the determination of prison officials to perpetuate the condition of ignorance and desperation which underlies the entire crime problem.

COMMUNITY CONTROL OF THE PRISONS is a course in prison conditions and prisoners' rights; its purpose is to inform people of the condition of prisoners, to help them reach a common understanding of that condition, and to move them to change that condition by supporting the struggle of prisoners for humanity and justice every way they can. The course will combine theory and practice, its goal being to involve all those participating in the course in active struggle against the crimes of the corrections departments and prison administration of Amerika, and particularly of the state of Michigan. It will draw on many resources: the prison experiences of the course leader and other ex-convicts, testimony from lawyers and other legal workers who have been engaged in conflict with prison officals, communications smuggled out of the prisons themselves, readings from Malcolm X, George Jackson, and other survivors of the assaults on their humanity by the prison system, attempted tours of penal facilities, and whatever else is needed to make us aware of the problem and the means for dealing with it.

The course is open to any interested citizen; it will meet at 4 pm on Tuesdays at a place to be determined later, and the course leader will be John Sinclair.

John & Leni back on the streets.