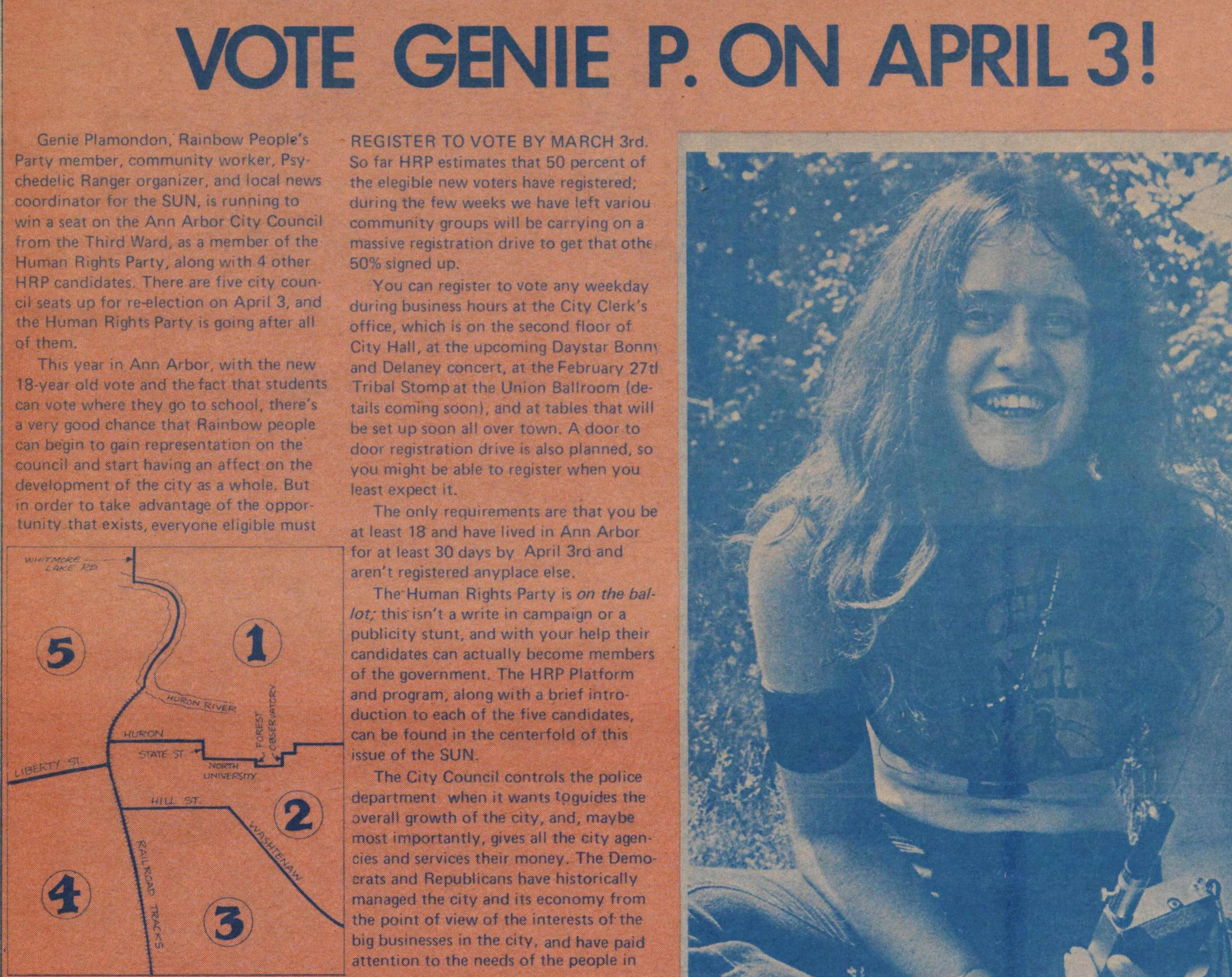 Genie Plamondon, Rainbow Peopie's Party member, community worker, Psychedelic Ranger organizer, and local news coordinator for the SUN, is running to win a seat on the Ann Arbor City Council from the Third Ward, as a member of the Human Rights Party, along with 4 other HRP candidates. There are five city council seats up for re-election on April 3, and the Human Rights Party is going after all of them.

This year in Ann Arbor, with the new 18-year old vote and the fact that students can vote where they go to school, there's a very  good chance that Rainbow people can begin to gain representaron on the council and start having an affect on the development of the city as a whole. But in order to take advantage of the opportunity that exists, everyone eligible must REGISTER TO VOTE BY MARCH 3rd. So far HRP estimates that 50 percent of the elegible new voters have registered; during the few weeks we have left various community groups will be carrying on a massive registration drive to get that other 50% signed up.

You can register to vote any weekday during business hours at the City Clerk's office, which is on the second floor of City Hall, at the upcoming Daystar Bonny and Delaney concert, at the February 27th Tribal Stomp at the Union Ballroom (details coming soon), and at tables that will be set up soon all over town. A door to door registration drive is also planned, so you might be able to register when you least expect it.

The only requirements are that you be at least 18 and have lived in Ann Arbor for at least 30 days by April 3rd and aren't registered anyplace else. The Human Rights Party is on the ballot; this isn't a write in campaign or a publicity stunt, and with your help their candidates can actually become members of the govemment. The HRP Platform and program, along with a brief introduction to each of the five candidates, can be found in the centerfold of this issue of the SUN.

The City Council controls the police department when it wants to, guides the overall growth of the city, and, maybe most importantly, gives all the city agencies and services their money. The Democrats and Republicans have historicatly managed the city and its economy from the point of view of the interests of the big businesses in the city, and have paid attention to the needs of the people in