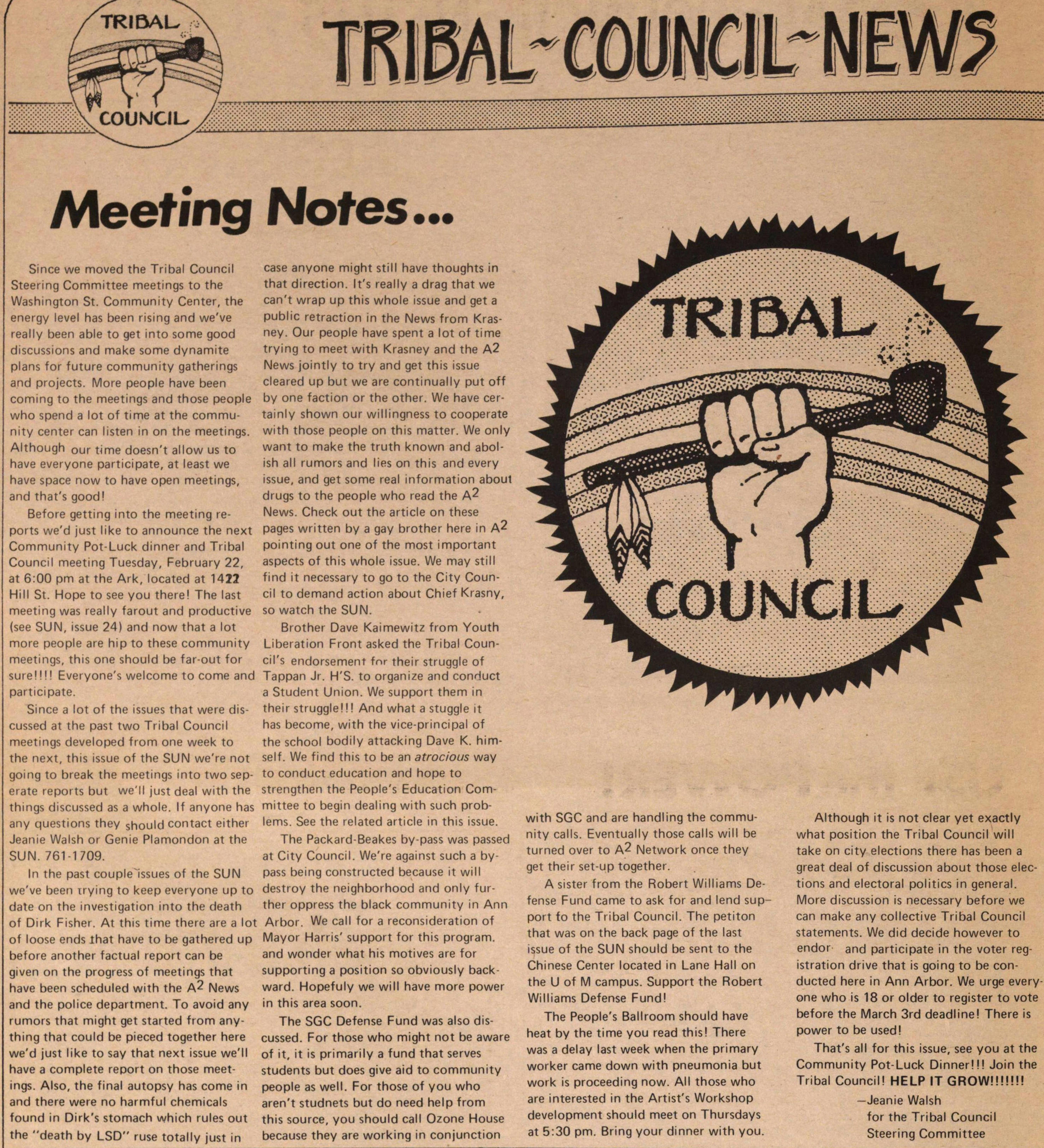 Since we moved the Tribal Council Steering Committee meetings to the Washington St. Community Center, the energy level has been rising and we've really been able to get into some good discussions and make some dynamite plans for future community gatherings and projects. More people have been coming to the meetings and those people who spend a lot of time at the community center can listen in on the meetings. Although our time doesn't allow us to have everyone particípate, at least we have space now to have open meetings, and that's goodl Before getting into the meeting reports we'd just like to announce the next Community Pot-Luck dinner and Tribal Council meeting Tuesday, February 22, at 6:00 pm at the Ark, located at 1422 Hill St. Hope to see you there! The last meeting was really farout and productive (see SUN, issue 24) and now that a lot more people are hip to these community meetings, this one should be farout for sureüü Everyone's welcome to come and particípate. Since a lot of the issues that were discussed at the past two Tribal Council meetings developed from one week to the next, this issue of the SUN we're not going to break the meetings into two seperate reports but we'll just deal with the things discussed as a whole. If anyone has any questions they should contact either Jeanie Walsh or Genie Plamondon at the SUN. 761-1709. In the past coupleissues of the SUN we've been irying to keep everyone up to date on the investigaron into the death of Dirk Fisher. At this time there are a lot of loose ends ihat have to be gathered up before another factual report can be given on the progress of meetings that have been scheduled with the A News and the pólice department. To avoid any rumors that might get started from anything that could be pieced together here we'd just like to say that next issue we'll have a complete report on those meetings. Also, the final autopsy has come in and there were no harmful chemicals found in Dirk's stomach which rules out the "death by LSD" ruse totally just in case anyone might stil I have thoughts n that direction. It's really a drag that we can't wrap up this whole issue and get a public retraction in the News from Krasney. Our people have spent a lot of time trying to meet with Krasney and the A2 News jointly to try and get this issue cleared up but we are continually put off by one faction or the other. We have eertainly shown our willingness to cooperate with those people on this matter. We only want to make the truth known and abolish all rumors and lies on this and every issue, and get some real information about drugs to the people who read the A News. Check out the article on these pages written by a gay brother here in A2 pointing out one of the most important aspects of this whole issue. We may still find t necessary to go to the City Council to demand action about Chief Krasny, so watch the SUN. Brother Dave Kaimewitz from Youth Liberation Front asked the Tribal Council's endorsement fnr their struggle of Tappan Jr. H'S. to organize and conduct a Student Union. We support them in their struggle!!! And what a stuggle it has become, with the vice-principal of the school bodily attacking Dave K. himself. We find this to be an atrocious way to conduct education and hope to strengthen the People's Education Committee to begin dealing with such problems. See the related article in this issue. The PackardBeakes by-pass was passed at City Council. We're against such a bypass being constructed because it will destroy the neighborhood and only further oppress the black community in Ann Arbor. We cali for a reconsideration of Mayor Harris' support for this program, and wonder what his motives are for supporting a position so obviously backward. Hopefuly we will have more power in this area soon. The SGC Defense Fund was also discussed. For those who might not be aware of t, t is primarily a fund that serves students but does give aid to community people as well. For those of you who aren't studnets but do need help from this source, you should cali Ozone House because they are working in conjunction with SGC and are handling the community calis. Eventually those calis wilt be turned over to A2 Network once they get their set-up together. A sister from the Robert Williams Defense Fund came to ask for and lend support io the Tribal Council. The petiton that was on the back page of the last issue of the SUN should be sent to the Chinese Center located in Lane Hall on the U of M campus. Support the Robert Williams Defense Fund! The People's Ballroom should have heat by the time you read this! There was a delay last week when the primary worker came down with pneumonía but work is proceeding now. All those who are nterested in the Artist's Workshop development should meet on Thursdays at 5:30 pm. Bring your dinner with you. Although t is not clear yet exactly what position the Tribal Council will take on city elections there has been a great deal of discussion about those elections and electoral politics in general. More discussion is necessary before we can make any collective Tribal Council statements. We did decide however to endor and particípate in the voter registration drive that is going to be conducted here in Ann Arbor. We urge everyone who is 18 or older to register to vote before the March 3rd deadline! There is power to be used! That's all for this issue, see you at the Community Pot-Luck Dinnerü! Join the Tribal Council! HELP IT GROW!!!!!!! for the Tribal Council Steering Committee