Life To The Life Culture! 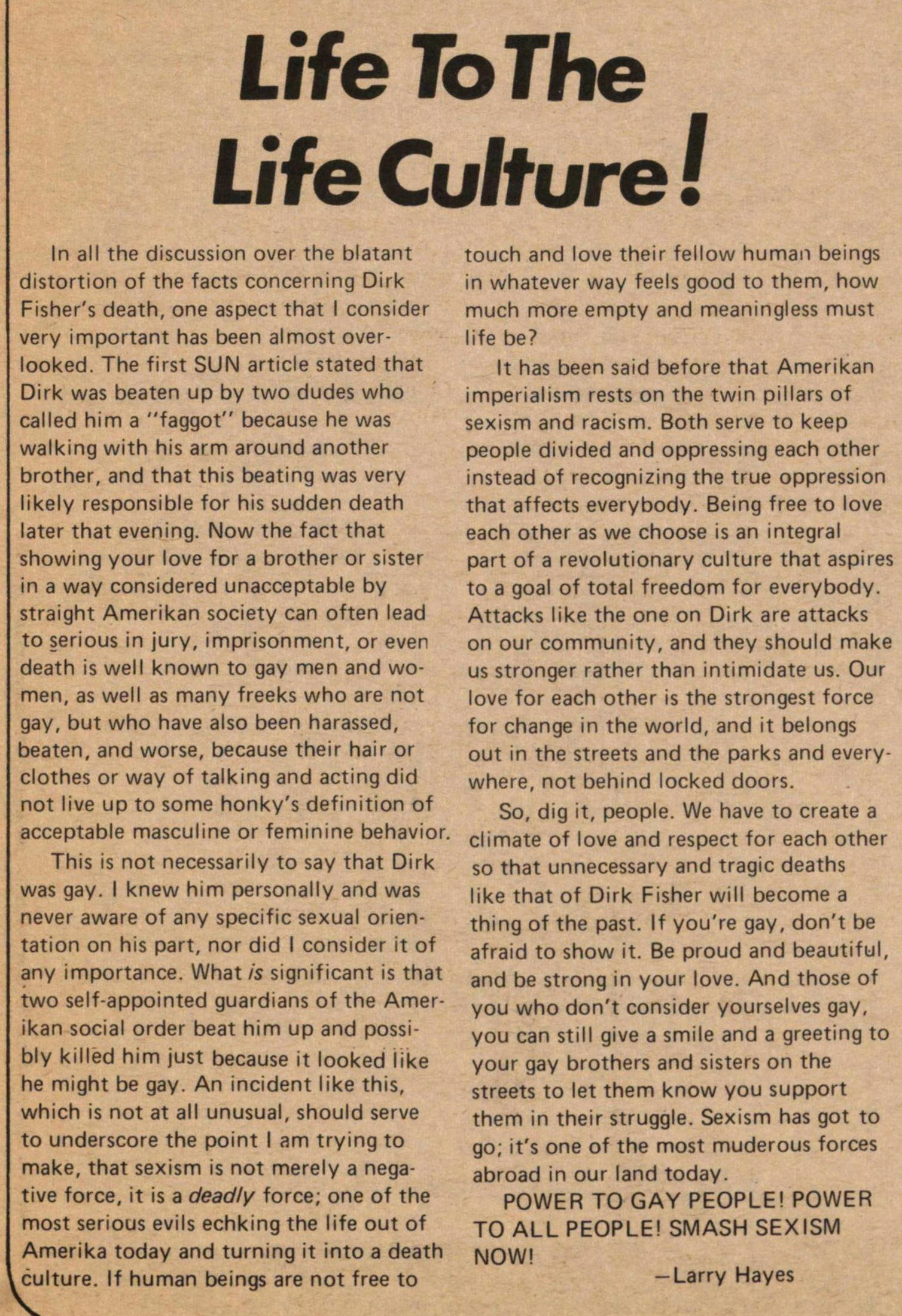 In all the discussion over the blatant distortion of the facts concerning Dirk Fisher's death, one aspect that I consider very important has been al most overlooked. The first SUN article stated that Dirk was beaten up by two dudes who called him a "faggot" because he was walking with his arm around another brother, and that this beating was very likely responsible for his sudden death later that evening. Now the fact that showing your love for a brother or sister in a way considered unacceptable by straight Amerikan society can often lead to serious in jury, imprisonment, or even death is well known to gay men and wonnen, as well as many freeks who are not gay, but who have also been harassed, beaten, and worse, because their hair or clothes or way of talking and acting did not live up to some honky's definition of acceptable masculine or feminine behavior. This is not necessarily to say that Dirk was gay. I knew him personally and was never aware of any specific sexual orientation on his part, nor did I consider it of any importance. What is significant is that two self-appointed guardians of the Amerikan social order beat him up and possibly killed him just because it looked iike he might be gay. An incident Iike this, which is not at all unusual, should serve to underscore the point I am trying to make, that sexism is not merely a negative force, it is a deadly forcé; one of the most serious evils echking the life out of I Amerika today and turning it into a death culture. If human beings are not free to touch and love their fellow human beings in whatever way feels good to them, how much more empty and meaningless must life be? It has been said before that Amerikan imperialism rests on the twin pillars of sexism and racism. Both serve to keep people divided and oppressing each other instead of recognizing the true oppression that affects everybody. Being free to love each other as we choose is an integral part of a revolutionary culture that aspires to a goal of total freedom for everybody. Attacks like the one on Dirk are attacks on our community, and they should make us stronger rather than intimídate us. Our love for each other is the strongest force for change in the world, and t belongs out in the streets and the parks and everywhere, not behind locked doors. So, dig it, people. We have to créate a climate of love and respect for each other so that unnecessary and tragic deaths like that of Dirk Fisher will become a thing of the past. If you're gay, don't be afraid to show it. Be proud and beautiful, and be strong in your love. And those of you who don't consider yourselves gay, you can still give a smile and a greeting to your gay brothers and sisters on the streets to let them know you support them in their struggle. Sexism has got to go; it's one of the most muderous forces abroad in our land today. POWER TO GAY PEOPLE! POWER TO ALL PEOPLE! SMASH SEXISM NOW!