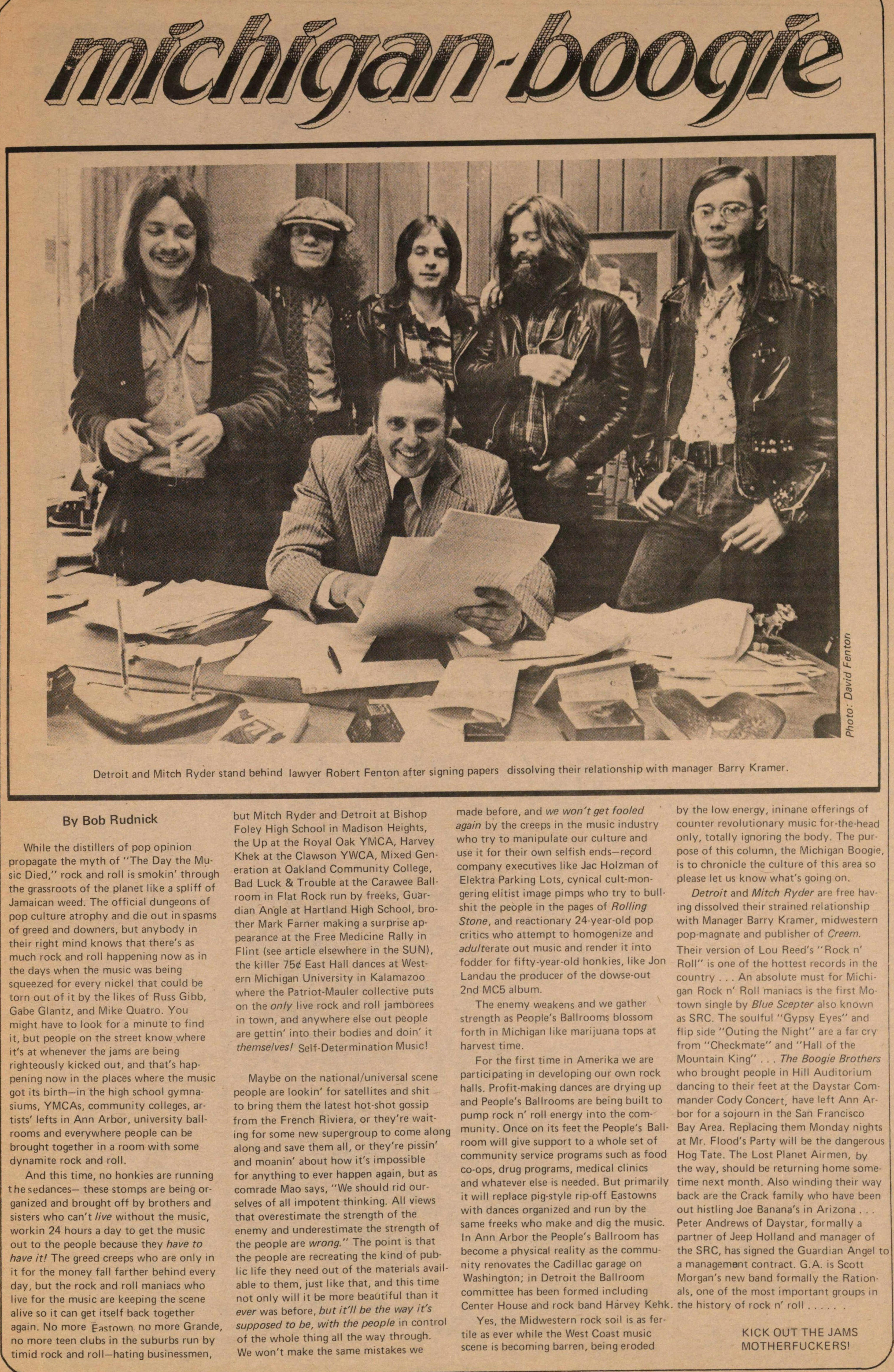 While the distillers of pop opinion propagate the myth of "The Day the Music Died," rock and roll is smokin' through the grassroots of the planet like a spliff of Jamaican weed. The official dungeons of pop culture atrophy and die out in spasms of greed and downers, but anybody in their right mind knows that there's as much rock and roll happening now as in the days when the music was being squeezed for every nickel that could be torn out of it by the likes of Russ Gibb, Gabe Glantz, and Mike Quatro. You might have to look for a minute to find it, but people on the street know where it's at whenever the jams are being righteously kicked out, and that's happening now in the places where the music got its birth - in the high school gymnasiums, YMCAs, community colleges, artists' lefts in Ann Arbor, university ballrooms and everywhere people can be brought together in a room with some dynamite rock and roll.

And this time, no honkies are running the sedances - these stomps are being organized and brought off by brothers and sisters who can't live without the music, workin 24 hours a day to get the music out to the people because they have to have it! The greed creeps who are only in it for the money fall farther behind every day, but the rock and roll maniacs who live for the music are keeping the scene alive so it can get itself back together again. No more Eastown no more Grande, no more teen clubs n the suburbs run by timid rock and roll-hating businessmen, but Mitch Ryder and Detroit at Bishop Foley High School in Madison Heights, the Up at the Royal Oak YMCA, Harvey Khek at the Clawson YWCA, Mixed Generation at Oakland Community College, Bad Luck & Trouble at the Carawee Ballroom in Flat Rock run by freeks, Guardian Angle at Hartland High School, brother Mark Farner making a surprise appearance at the Free Medicine Rally in Flint (see article elsewhere in the SUN), the killer 75¢ East Hall dances at Western Michigan University in Kalamazoo where the Patriot-Mauler collective puts on the only live rock and roll jamborees in town, and anywhere else out people are gettin' into their bodies and doin' it themselves! Self-Determination Music!

Maybe on the national/universal scene people are lookin' for satellites and shit to bring them the latest hot-shot gossip from the French Riviera, or they're waiting for some new supergroup to come along along and save them all, or they're pissin' and moanin' about how it's impossible for anything to ever happen again, but as comrade Mao says, "We should rid ourselves of all impotent thinking. All views that overestimate the strength of the enemy and underestimate the strength of the people are wrong." The point is that the people are recreating the kind of public life they need out of the materials available to them, just like that, and this time not only will it be more beautiful than it ever was before, but it'll be the way it's supposed to be, with the people in control of the whole thing all the way through. We won't make the same mistakes we made before, and we won't get fooled again by the creeps in the music industry who try to manipulate our culture and use it for their own selfish ends - record company executives like Jac Holzman of Elektra Parking Lots, cynical cult-mongering elitist image pimps who try to bullshit the people in the pages of Rolling Stone, and reactionary 24-year-old pop critics who attempt to homogenize and adulterate out music and render it into fodder for fifty-year-old honkies, like Jon Landau the producer of the dowse-out 2nd MC5 album.

The enemy weakens and we gather strength as People's Ballrooms blossom forth in Michigan like marijuana tops at harvest time.

For the first time in Amerika we are participating in developing our own rock halls. Profit-making dances are drying up and People's Ballrooms are being built to pump rock n' roll energy into the community. Once on its feet the People's Ballroom will give support to a whole set of community service programs such as food co-ops, drug programs, medical clinics and whatever else is needed. But primarily it will replace pig-style rip-off Eastowns with dances organized and run by the same freeks who make and dig the music. In Ann Arbor the People's Ballroom has become a physical reality as the community renovates the Cadillac garage on Washington; in Detroit the Ballroom committee has been formed including Center House and rock band Harvey Kehk.

Yes, the Midwestern rock soil is as fertile as ever while the West Coast music scene is becoming barren, being eroded by the low energy, ininane offerings of counter revolutionary music for-the-head only, totally ignoring the body. The purpose of this column, the Michigan Boogie, is to chronicle the culture of this area so please let us know what's going on.

Detroit and Mitch Ryder are free having dissolved their strained relationship with Manager Barry Kramer, midwestern pop-magnate and publisher of Creem. Their version of Lou Reed's "Rock n' Roll" is one of the hottest records in the country . . . An absolute must for Michigan Rock n' Roll maniacs is the first Motown single by Blue Scepter also known as SRC. The soulful "Gypsy Eyes" and flip side "Outing the Night" are a far cry from "Checkmate" and "Hall of the Mountain King" . . . The Boogie Brothers who brought people in Hill Auditorium dancing to their feet at the Daystar Commander Cody Concert, have left Ann Arbor for a sojourn in the San Francisco Bay Area. Replacing them Monday nights at Mr. Flood's Party will be the dangerous Hog Tate. The Lost Planet Airmen, by the way, should be returning home sometime next month. Also winding their way back are the Crack family who have been out histling Joe Banana's in Arizona . . . Peter Andrews of Daystar, formally a partner of Jeep Holland and manager of the SRC, has signed the Guardian Angel to a management contract. G.A. is Scott Morgan's new band formally the Rationals, one of the most important groups in the history of rock n' roll......

KICK OUT THE JAMS MOTHERFUCKERS!