Wcbn On The Air 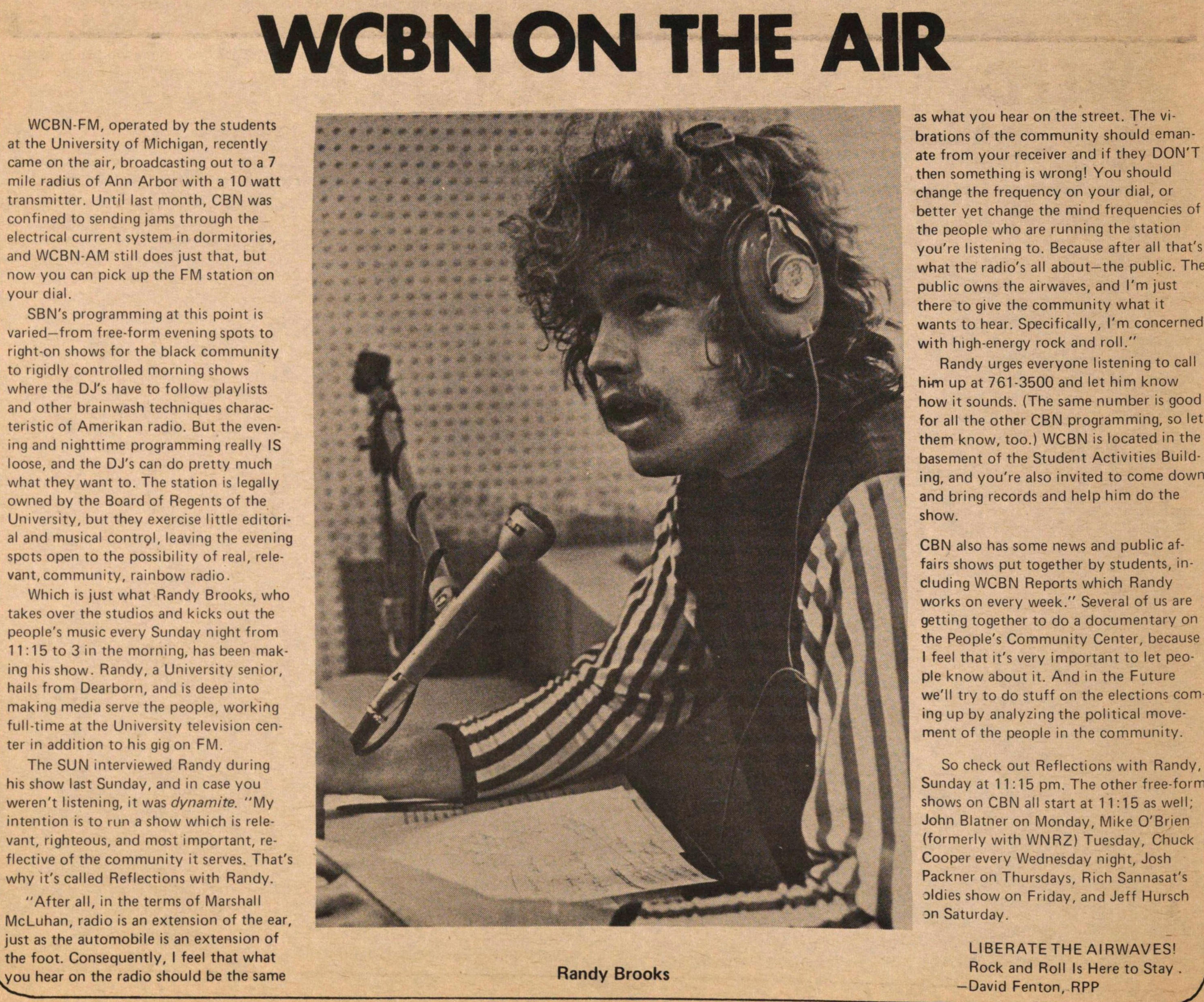 WCBN-FM, operated by the students at the University of Michigan, recently came on the air, broadcasting out to a 7 mile radius of Ann Arbor with a 10 watt transmitter. Until last month, CBN was confined to sending jams through the electrical current system in dormitories, and WCBN-AM still does just that, but now you can piek up the FM station on your dial. SBN's programming at this point is varied- from free-form evening spots to right-on shows for the black community to rigidly controlled morning shows where the DJ's have to follow playlists and other brainwash techniques characteristic of Amerikan radio. But the evening and nighttime programming really IS loose, and the DJ's can do pretty much what they want to. The station is legally owned by the Board of Regents of the University, but they exercise little editorial and musical control, leaving the evening spots open to the possibility of real, relevant, community, rainbow radio. Which is just what Randy Brooks, who takes over the studios and kicks out the people's music every Sunday night from 1 1 : 1 5 to 3 in the morning, has been making his show. Randy, a University senior, hails from Dearborn, and is deep into making media serve the people, working fulltime at the University televisión center in addition to his gig on FM. The SUN interviewed Randy during his show last Sunday, and in case you weren't listening, it was dynamite. "My intention is to run a show which is relevant, righteous, and most important, reflective of the community it serves. That's why it's called Reflections with Randy. "After all, in the terms of Marshall McLuhan, radio is an extensión of the ear, just as the automobile s an extensión of the foot. Consequently, I feel that what you hear on the radio should be the same as what you hear on the street. The vibrations of the community should emanate from your receiver and f they DON'T then something is wrong! You should change the frequency on your dial, or better yet change the mind frequencies of the people who are running the station you're listening to. Because after all that's what the radio's all about- the public. The public owns the airwaves, and l'm just there to give the community what it wants to hear. Specifically, l'm concerned with high-energy rock and roll." Randy urges everyone listening to cali hUn up at 761-3500 and let him know how t sounds. (The same number is good for all the other CBN programming, so let them know, too.) WCBN is located in the basement of the Student Activities Building, and you're also invited to come down and bring records and help him do the show. CBN also has some news and public affairs shows put together by students, includingWCBN Reports which Randy works on every week." Several of us are getting together to do a documentary on the People's Community Center, because I feel that it's very important to let people know about it. And in the Future we'll try to do stuff on the elections com ing up by analyzing the political movement of the people in the community. So check out Reflections with Randy, Sunday at 1 1 : 1 5 pm. The other f ree-forrr shows on CBN all start at 11:15 as wel I; John Blatner on Monday, Mike O'Brien (formerly with WNRZ) Tuesday, Chuck Cooper every Wednesday night, Josh Packner on Thursdays, Rich Sannasat's Dldies show on Friday, and Jeff Hursch on Saturday. LIBÉRATE THE AIRWAVES! Rock and Roll Is Here to Stay .