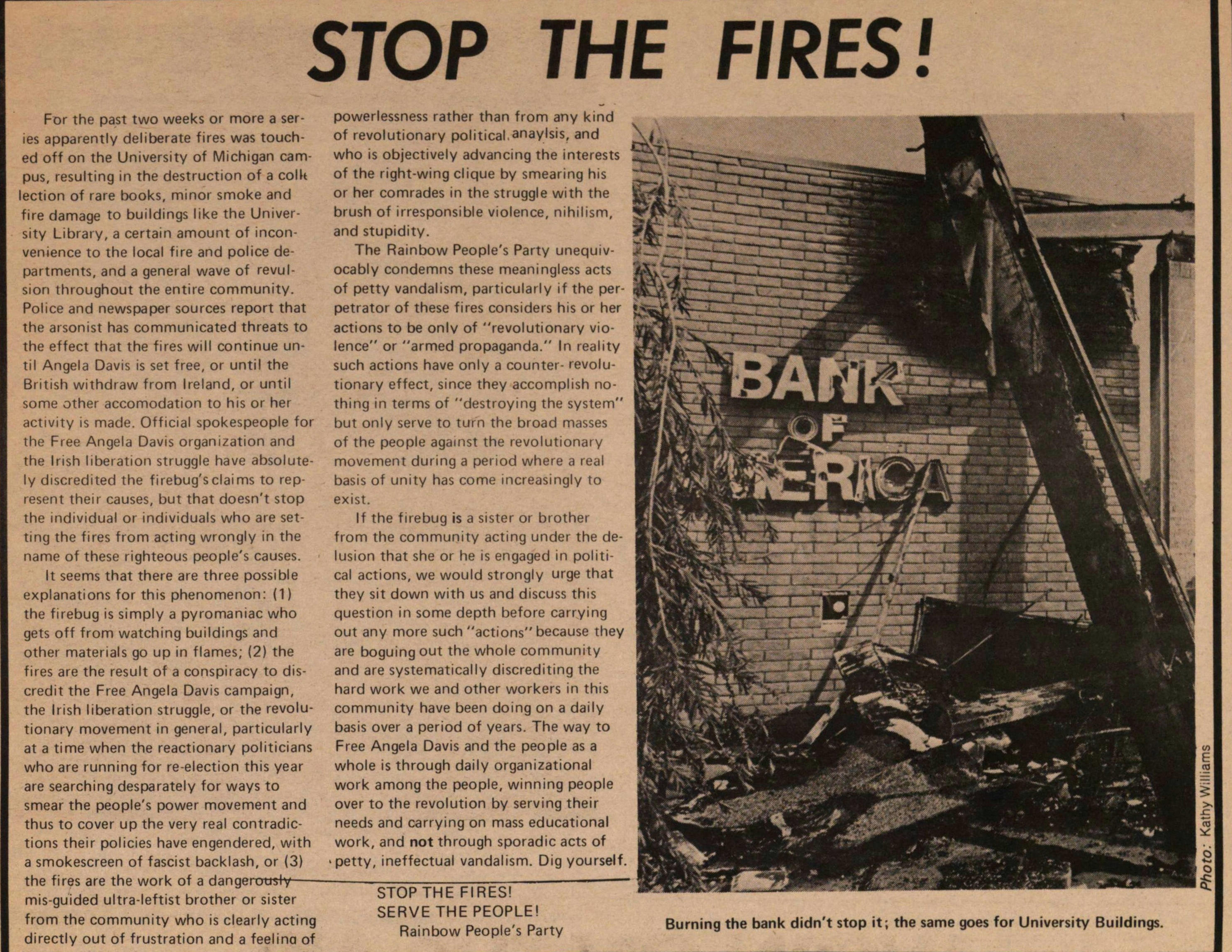 For the past two weeks or more a series apparently delibérate fires was touched off on the University of Michigan campus, resulting in the destruction of a colk lection of rare books, minor smoke and fire damage to buildings like the University Library, a certain amount of inconvenience to the local fire and pólice departments, and a general wave of revulsión throughout the entire community. Pólice and newspaper sources report that the arsonist has communicated threats to the effect that the fires will continue until Angela Davis is set free, or until the British withdraw from Ireland, or until some other accomodation to his or her activity is made. Official spokespeople for the Free Angela Davis organization and the Irish liberation struggle have absolutely discredited the f rebug's claims to represent their causes, but that doesn't stop the individual or individuals who are setting the fires from acting wrongly in the name of these righteous people's causes. It seems that there are three possible explanations for this phenomenon: (1) the firebug is simply a pyromaniac who gets off from watching buildings and other materials go up in flames; (2) the fires are the result of a conspiracy to discredit the Free Angela Davis campaign, the Irish liberation struggle, or the revolutionary movement in general, particularly at a time when the reactionary politicians who are running for re-election this year are searching desparately for ways to smear the people's power movement and thus to cover up the very real contradictions their policies have engendered, with a smokescreen of fascist backlash, or (3) the fires are the work of a dangerotrsty mis-guided ultra-leftist brother or sister from the community who is clearly acting directly out of frustration and a feelina of powerlessness rather than from any kind of revolutionary political.anaylsis, and who is objectively advancing the interests of the right-wing clique by smearing his or her comrades in the struggle with the brush of irresponsible violence, nihilism, and stupidity. The Rainbow People's Party unequivocably condemns these meaningless acts of petty vandalism, particularly f the perpetrator of these fires considers his or her actions to be onlv of "revolutionary violence" or "armed propaganda." In reality such actions have only a revolutionary effect, since they accomplish nothing in terms of "destroying the system" but only serve to turn the broad masses of the people against the revolutionary movement during a period where a real basis of unity has come increasingly to exist. If the firebug is a sister or brother from the community acting under the delusion that she or he is engaged in political actions, we would strongly urge that they sit down with us and discuss this question in some depth before carrying out any more such "actions" because they are boguingout the whole community and are systematically discrediting the hard work we and other workers in this community have been doing on a daily basis over a period of years. The way to Free Angela Davis and the people as a whole is through daily organizational work among the people, winning people over to the revolution by serving their needs and carrying on mass educational work, and not through sporadic acts of ■petty, ineffectual vandalism. Dig yourself. STOP THE FIRES! SERVE THE PEOPLE!