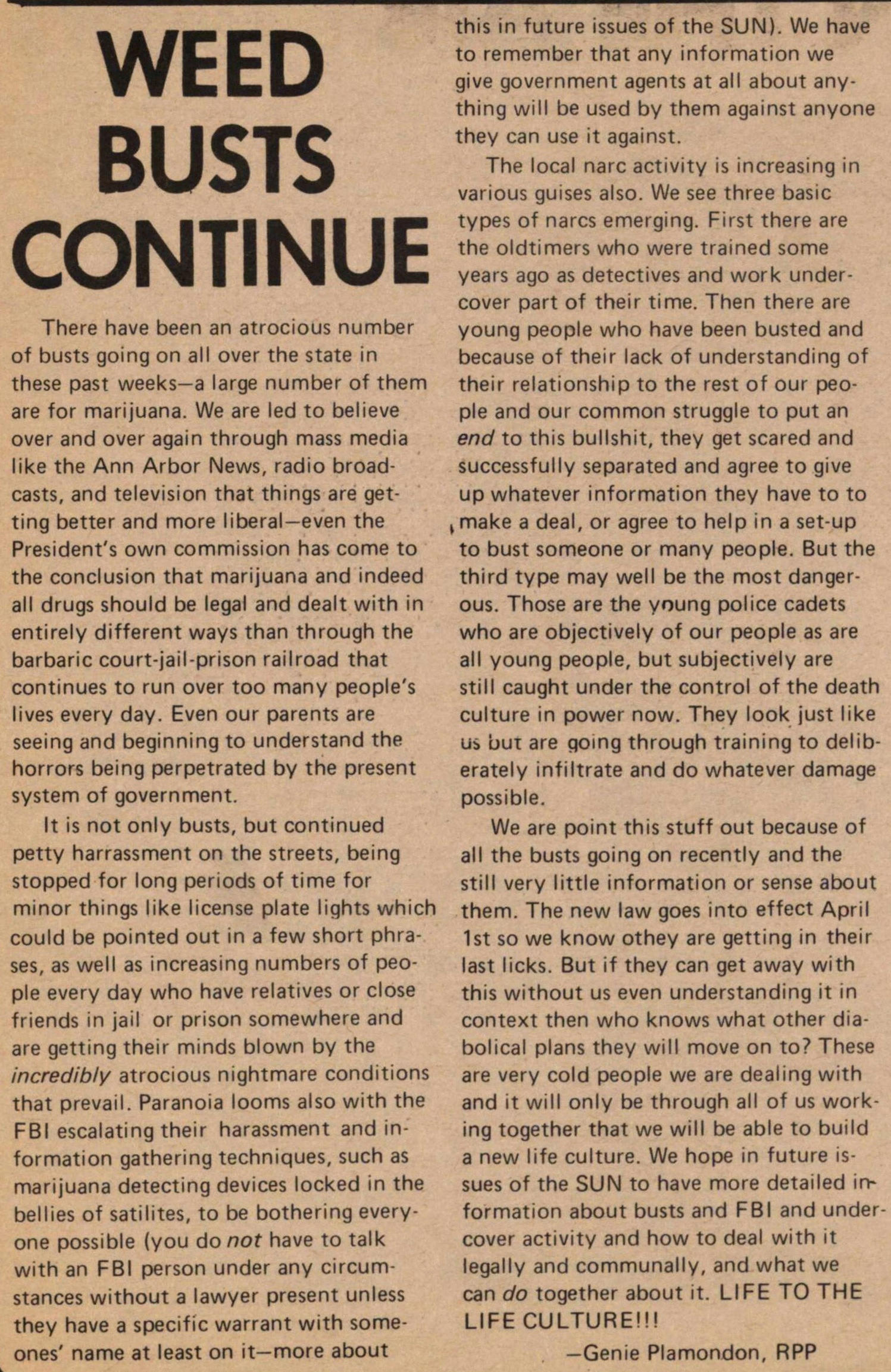 There have been an atrocious number of busts going on all over the state in these past weeks - a large number of them are for marijuana. We are led to believe over and over again through mass media like the Ann Arbor News, radio broadcasts, and television that things are getting better and more liberal - even the President's own commission has come to the conclusion that marijuana and indeed all drugs should be legal and dealt with in entirely different ways than through the barbaric court-jail-prison railroad that continues to run over too many people's lives every day. Even our parents are seeing and beginning to understand the horrors being perpetrated by the present system of government.

It is not only busts, but continued petty harrassment on the streets, being stopped for long periods of time for minor things like license plate lights which could be pointed out in a few short phrases, as well as increasing numbers of people every day who have relatives or close friends in jail or prison somewhere and are getting their minds blown by the incredibly atrocious nightmare conditions that prevail. Paranoia looms also with the FBI escalating their harassment and information gathering techniques, such as marijuana detecting devices locked in the bellies of satilites, to be bothering everyone possible (you do not have to talk with an FBI person under any circumstances without a lawyer present unless they have a specific warrant with someones' name at least on it - more about this in future issues of the SUN). We have to remember that any information we give government agents at all about anything will be used by them against anyone they can use it against.

The local narc activity is increasing in various guises also. We see three basic types of narcs emerging. First there are the oldtimers who were trained some years ago as detectives and work undercover part of their time. Then there are young people who have been busted and because of their lack of understanding of their relationship to the rest of our people and our common struggle to put an end to this bullshit, they get scared and successfully separated and agree to give up whatever information they have to to make a deal, or agree to help in a set-up to bust someone or many people. But the third type may well be the most dangerous. Those are the young police cadets who are objectively of our people as are all young people, but subjectively are still caught under the control of the death culture in power now. They look just like us but are going through training to deliberately infiltrate and do whatever damage possible.

We are point this stuff out because of all the busts going on recently and the still very little information or sense about them. The new law goes into effect April 1st so we know they are getting in their last licks. But if they can get away with this without us even understanding it in context then who knows what other diabolical plans they will move on to? These are very cold people we are dealing with and it will only be through all of us working together that we will be able to build a new life culture. We hope in future issues of the SUN to have more detailed information about busts and FBI and undercover activity and how to deal with it legally and communally, and what we can do together about it. LIFE TO THE LIFE CULTURE!!!