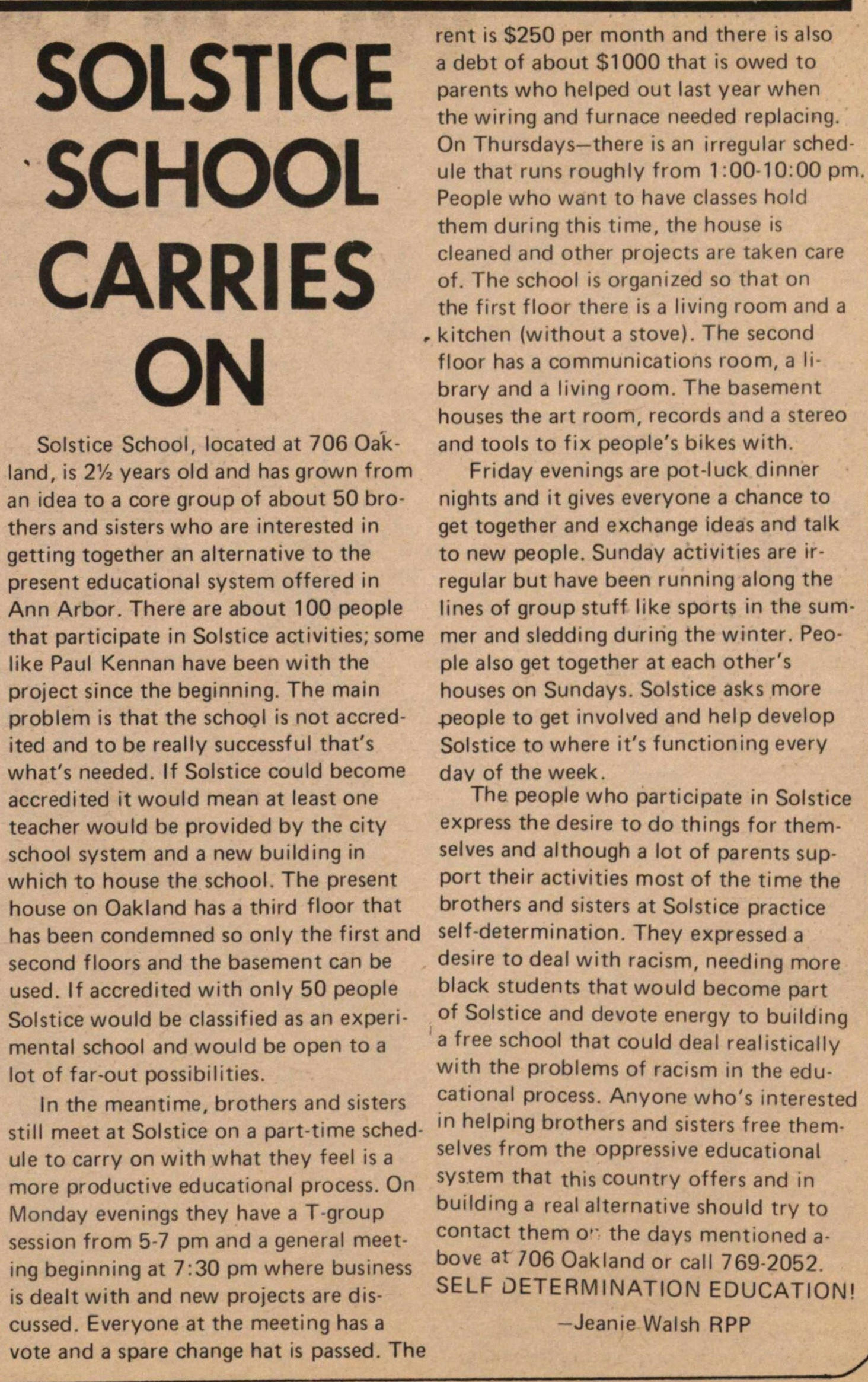 Solstice School, located at 706 Oa'kland, is 2Vi years oíd and has grown from an idea to a core group of about 50 brothers and sisters who are nterested n getting together an alternative to the present educational system offered in Ann Arbor. There are about 100 people that particípate in Solstice activities; some like Paul Kennan have been with the project since the beginning. The main problem is that the school is not accredited and to be really successful that's what's needed. If Solstice could become accredited it would mean at least one teacher would be provided by the city school system and a new building in which to house the school. The present house on Oakland has a third floor that has been condemned so only the f irst and second floors and the basement can be used. If accredited with only 50 people Solstice would be classif ied as an experimental school and would be open to a lot of far-out possibilities. In the meantime, brothers and sisters still meet at Solstice on a part-time schedule to carry on with what they feel is a more productive educational process. On Monday evenings they have a T-group session from 5-7 pm and a general meeting beginning at 7:30 pm where business is dealt with and new projects are discussed. Everyone at the meeting has a vote and a spare change hat is passed. The rent is $250 per month and there s also a debt of about $1000 that s owed to parents who helped out last year when the wiring and furnace needed replacing. On Thursdays- there s an irregular schedule that runs roughly from 1 : 00-10:00 pm. People who want to have classes hold them during this time, the house is cleaned and other projects are taken care of. The school is organized so that on the first floor there is a living room and a , kitchen (without a stove). The second floor has a Communications room, a library and a living room. The basement houses the art room, records and a stereo and tools to fix people's bikes with. Friday evenings are pot-luck dinner nights and it gives everyone a chance to get together and exchange ideas and talk to new people. Sunday activities are irregular but have been running along the lines of group stuff like sports in the summer and sledding during the winter. People also get together at each other's houses on Sundays. Solstice asks more people to get nvolved and help develop Solstice to where it's functioning every dav of the week. The people who particípate in Solstice express the desire to do things for themselves and although a lot of parents support their activities most of the time the brothers and sisters at Solstice practice self-determination. They expressed a desire to deal with racism, needing more black students that would become part of Solstice and devote energy to building a free school that could deal realistically with the problems of racism in the educational process. Anyone who's interested in helping brothers and sisters free themselves from the oppressive educational system that this country offers and in building a real alternative should try to contact them or' the days mentioned above at 706 Oakland or cali 769-2052. SELF ÜETERMINATION EDUCATION!