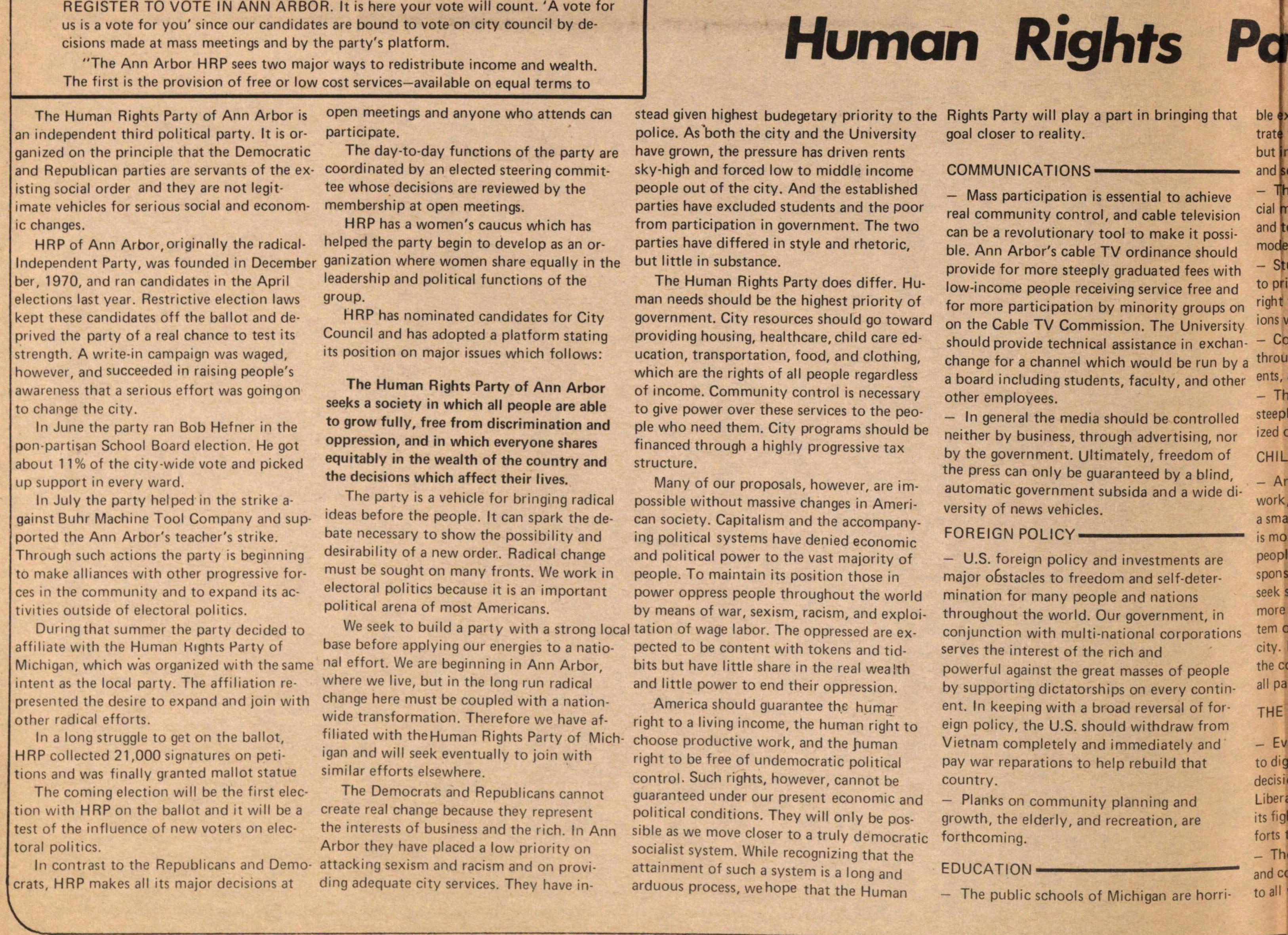 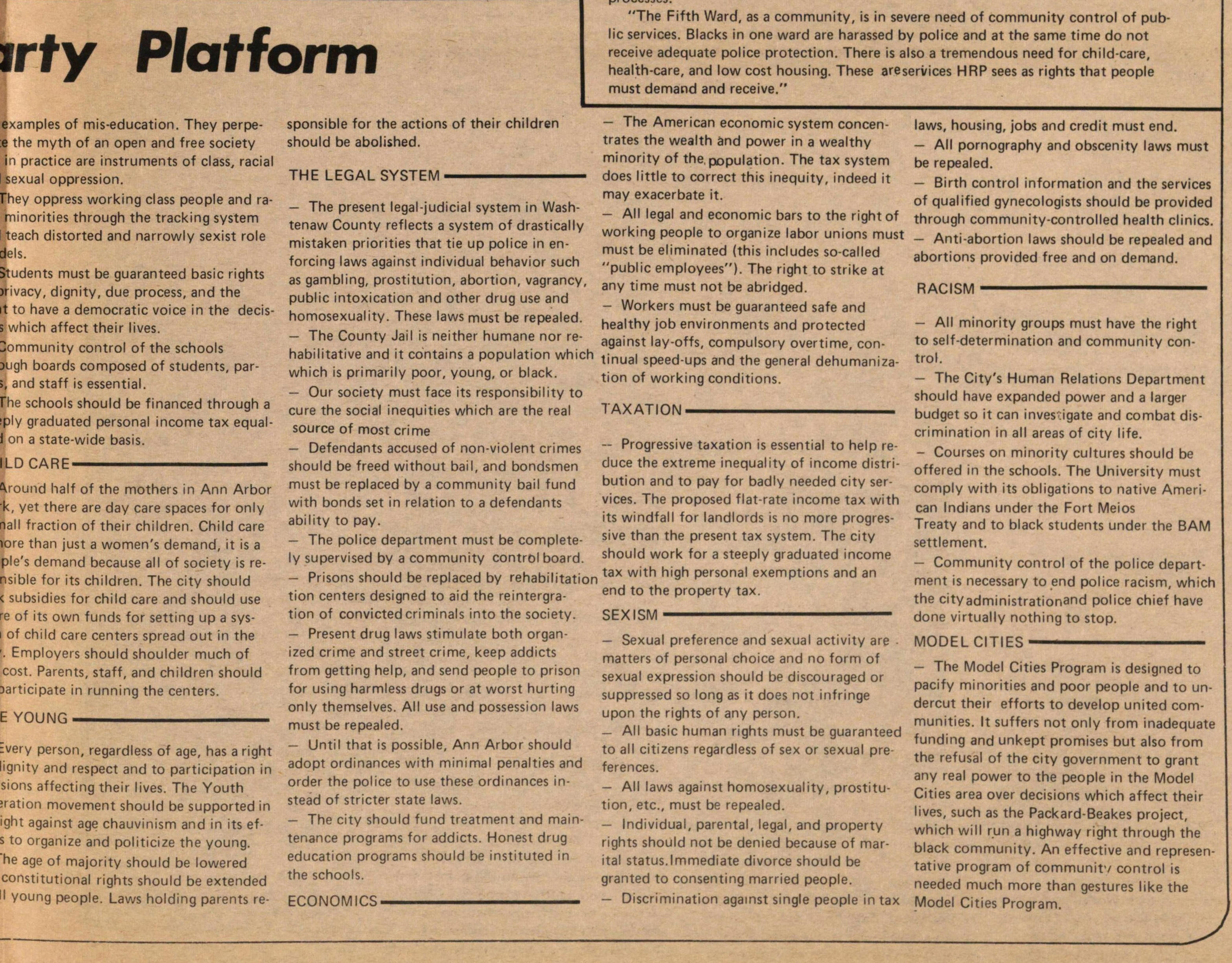 REGISTER TO VOTE IN ANN ARBOR. It is here your vote will count. 'A vote for us is a vote for you' since our candidates are bound to vote on city council by decisions made at mass meetings and by the party's platform.

"The Ann Arbor HRP sees two major ways to redistribute income and wealth. The first is the provision of free or low cost services - avialble on equal terms to

The Human Rights Party of Ann Arbor is an independent third political party. It is organized on the principle that the Democratic and Republican parties are servants of the existing social order and they are not legitimate vehicles for serious social and economic changes.

HRP of Ann Arbor, originally the radical-Independent Party, was founded in December, 1970, and ran candidates in the April elections last year. Restrictive election laws kept these candidates off the ballot and deprived the party of a real chance to test its strength. A write-in campaign was waged, however, and succeeded in raising people's awareness that a serious effort was going on to change the city.

In June the party ran Bob Hefner in the non-partisan School Board election. He got about 11% of the city-wide vote and picked up support in every ward.

In July the party helped in the strike against Buhr Machine Tool Company and supported the Ann Arbor's teacher's strike. Through such actions the party is beginning to make alliances with other progressive forces in the community and to expand its activities outside of electoral politics.

During that summer the party decided to affiliate with the Human Rights Party of Michigan, which was organized with the same intent as the local party. The affiliation represented the desire to expand and join with other radical efforts.

In a long struggle to get on the ballot, HRP collected 21,000 signatures on petitions and was finally granted mallot statue

The coming election will be the first election with HRP on the ballot and it will be a test of the influence of new voters on electoral politics.

In contrast to the Republicans and Democrats, HRP makes all its major decisions at open meetings and anyone who attends can participate.

The day-to-day functions of the party are coordinated by an elected steering committee whose decisions are reviewed by the membership at open meetings.

HRP has a women's caucus which has helped the party begin to develop as an organization where women share equally in the leadership and political functions of the group.

HRP has nominated candidates for City Council and has adopted a platform stating its position on major issues which follows:

The Human Rights Party of Ann Arbor seeks a society in which all people are able to grow fully, free from discrimination and oppression, and in which everyone shares equitably in the wealth of the country and the decisions which affect their lives.

The party is a vehicle for bringing radical ideas before the people. It can spark the debate necessary to show the possibility and desirability of a new order. Radical change must be sought on many fronts. We work in electoral politics because it is an important political arena of most Americans.

We seek to build a party with a strong local base before applying our energies to a national effort. We are beginning in Ann Arbor, where we live, but in the long run radical change here must be coupled with a nationwide transformation. Therefore we have affiliated with the Human Rights Party of Michigan and will seek eventually to join with similar efforts elsewhere.

The Democrats and Republicans cannot create real change because they represent the interests of business and the rich. In Ann Arbor they have placed a low priority on attacking sexism and racism and on providing adequate city services. They have instead given highest budegetary priority to the police. As both the city and the University have grown, the pressure has driven rents sky-high and forced low to middle income people out of the city. And the established parties have excluded students and the poor from participation in government. The two parties have differed in style and rhetoric, but little in substance.

The Human Rights Party does differ. Human needs should be the highest priority of government. City resources should go toward providing housing, healthcare, child care education, transportation, food, and clothing, which are the rights of all people regardless of income. Community control is necessary to give power over these services to the people who need them. City programs should be financed through a highly progressive tax structure.

Many of our proposals, however, are impossible without massive changes in American society. Capitalism and the accompanying political systems have denied economic and political power to the vast majority of people. To maintain its position those in power oppress people throughout the world by means of war, sexism, racism, and exploitation of wage labor. The oppressed are expected to be content with tokens and tidbits but have little share in the real wealth and little power to end their oppression.

- Mass participation is essential to achieve real community control, and cable television can be a revolutionary tool to make it possible. Ann Arbor's cable TV ordinance should provide for more steeply graduated fees with low-income people receiving service free and for more participation by minority groups on on the Cable TV Commission. The University should provide technical assistance in exchange for a channel which would be run by a board including students, faculty, and other other employees.

- In general the media should be controlled neither by business, through advertising, nor by the government. Ultimately, freedom of the press can only be guaranteed by a blind, automatic government subsida and a wide diversity of news vehicles.

- U.S. foreign policy and investments are major obstacles to freedom and self-determination for many people and nations throughout the world. Our government, in conjunction with multi-national corporations serves the interest of the rich and powerful against the great masses of people by supporting dictatorships on every continent. In keeping with a broad reversal of foreign policy, the U.S. should withdraw from Vietnam completely and immediately and pay war reparations to help rebuild that country.

- Planks on community planning and growth, the elderly, and recreation, are forthcoming.

- The public schools of Michigan are horrible examples of mis-education. They perpetrate the myth of an open and free society but in practice are instruments of class, racial and sexual oppression.

- They oppress working class people and racial minorities through the tracking system and teach distorted and narrowly sexist role models.

- Students must be guaranteed basic rights to privacy, dignity, due process, and the decisions which affect their lives.

- Community control of schools through boards composed of students, parents and staff is essential.

- The schools should be financed through a steeply graduated personal income tax equalized on a state-wide basis.

- Around half of the mothers in Ann Arbor work, yet there are day care spaces for only a small fraction of their children. Child care is more than just a woman's demand, it is a people's demand because of all of society is responsible for its children. The city should seek subsidies for child care and should use more of its own funds for setting up a system of child care centers spread out in the city. Employers should shoulder much of the cost. Parents, staff, and children should all participate in running the centers.

- Every person, regardless of age, has a right to dignity and respect and to participation in decisions affecting their lives. The Youth Liberation movement should be supported in its fight against age chauvinism and its efforts to organize and politicize the young.

The age of majority should be lowered and constitutional rights should be extended to all young people. Laws holding parents responsible for the actions of their children should be abolished.

- The present legal-judicial system in Washtenaw County reflects a system of drastically mistaken priorities that tie up police in enforcing laws against individual behavior such as gambling, prostitution, abortion, vagrancy, public intoxication and other drug use and homosexuality. These laws must be repealed.

- The County Jail is neither humane nor rehabilitative and it contains a population which which is primarily poor, young, or black.

- Defendants accused of non-violent crimes should be freed without bail, and bondsmen must be replaced by a community bail fund with bonds set in relation to a defendants ability to pay.

- The police department must be completely supervised by a community control board.

- Prisons should be replaced by rehabilitation tion centers designed to aid the reintegration of convicted criminals into the society.

- Present drug laws stimulate both organized crime and street crime, keep addicts from getting help, and send people to prison for using harmless drugs or at worst hurting only themselves. All use and possession laws must be repealed.

- Until that is possible, Ann Arbor should adopt ordinances with minimal penalties and order the police to use these ordinances instead of stricter state laws.

- The city should fund treatment and maintenance programs for addicts. Honest drug education programs should be instituted in the schools.

- The American economic system concentrates the wealth and power in a wealthy minority of the population. The tax system does little to correct this inequity, indeed it may exacerbate it.

- All legal and economic bars to the right of working people to organize labor unions must must be eliminated (this includes so-called "public employees"). The right to strike at any time must not be abridged.

- Workers must be guaranteed safe and healthy job environments and protected against lay-offs, compulsory overtime, continual speed-ups and the general dehumanization of working conditions.

- Progressive taxation is essential to help reduce the extreme inequality of income distribution and to pay for badly needed city services. The proposed flat-rate income tax with its windfall for landlords is no more progressive than the present tax system. The city should work for a steeply graduated income tax with high personal exemptions and an end to the property tax.

- Sexual preference and sexual activity are matters of personal choice and no form of sexual expression should be discouraged or suppressed so long as it does not infringe upon the rights of any person.

- All basic human rights must be guaranteed to all citizens regardless of sex or sexual preferences.

- All laws against homosexuality, prostitution, etc, must be repealed.

- Individual, parental, legal, and property rights should not be denied because of marital status. Immediate divorce should be granted to consenting married people.

- Discrimination against single people in tax laws, housing, jobs and credit must end.

- All pornography and obscenity laws must be repealed.

- Birth control information and the services of qualified gynecologists should be provided through community-controlled health clinics.

- Anti-abortion laws should be repealed and abortions provided free and on demand.

- All minority groups must have the right to self-determination and community control.

- The City's Human Relations Department should have expanded power and a larger budget so it can investigate and combat discrimination in all areas of city life.

- Courses on minority cultures should be offered in the schools. The University must comply with its obligations to native American Indians under the Fort Meios Treaty and to black students under the BAM settlement.

- Community control of the police department is necessary to end police racism, which the city administration and police chief have done virtually nothing to stop.

- The Model Cities Program is designed to pacify minorities and poor people and to undercut their efforts to develop united communities. It suffers not only from inadequate funding and unkept promises but also from the refusal of the city government to grant any real power to the people in the Model Cities area over decisions which affect their lives, such as the Packard-Beakes project, which will run a highway right through the black community. An effective and representative program of community control is needed much more than gestures like the Model Cities Program.