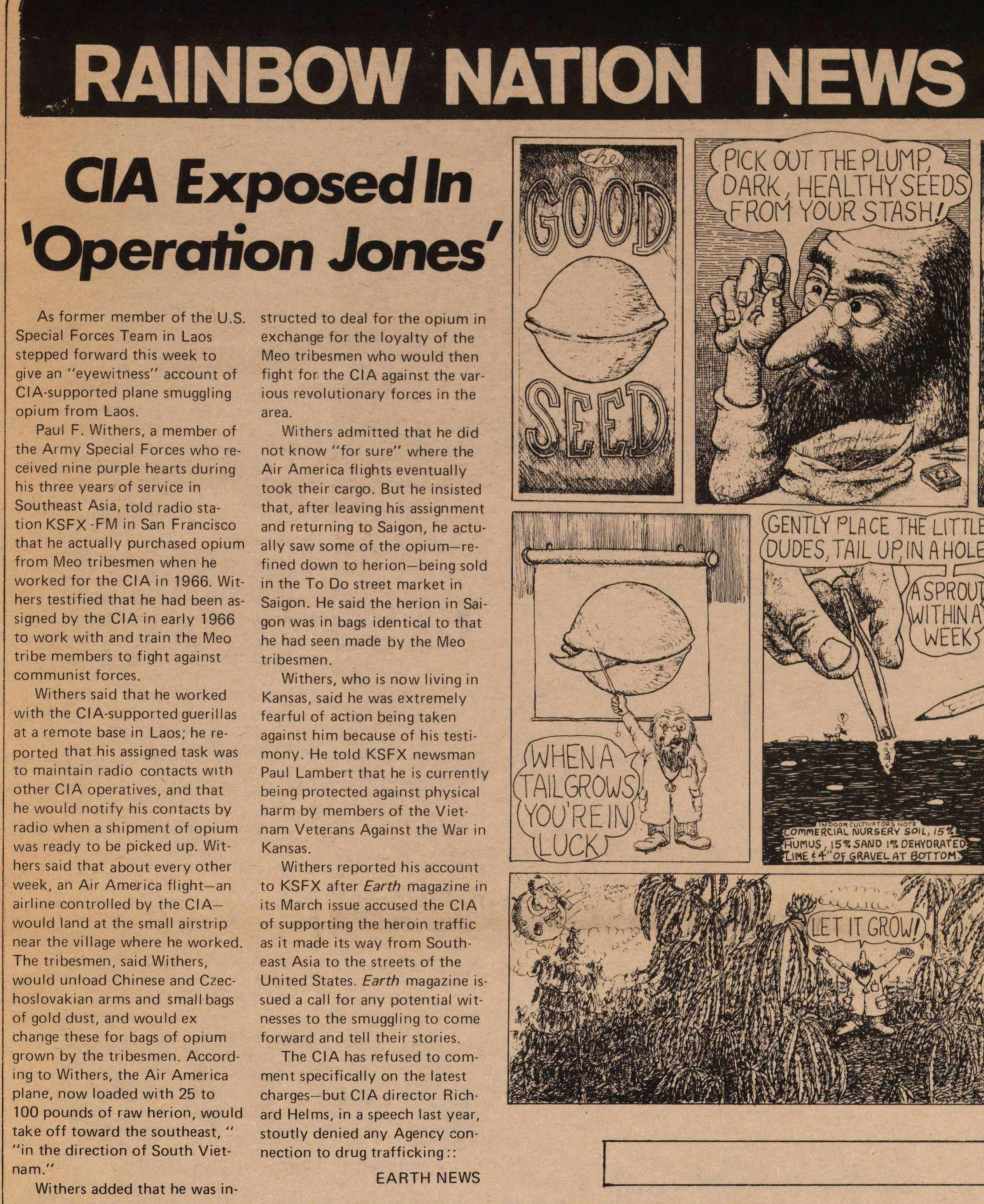 As former member of the U.S. Special Forces Team in Laos stepped forward this week to give an "eyewitness" account of CIA-supported plane smuggling opium from Laos. Paul F. Withers, a member of the Army Special Forces who received nine purple hearts during his three years of service in Southeast Asia, told radio station KSFX-FM in San Francisco that he actually purchased opium from Meo tribesmen when he worked for the CIA in 1966. Withers testified that he had been assigned by the CIA in early 1966 to work with and train the Meo tribe members to fight against communist forces.

Withers said that he worked with the CIA-supported guerillas at a remote base in Laos; he reported that his assigned task was to maintain radio contacts with other CIA operatives, and that he would notify his contacts by radio when a shipment of opium was ready to be picked up. Withers said that about every other week, an Air America flight - an airline controlled by the CIA - would land at the small airstrip near the village where he worked. The tribesmen, said Withers, would unload Chinese and Czechoslovakian arms and small bags of gold dust, and would exchange these for bags of opium grown by the tribesmen. According to Withers, the Air America plane, now loaded with 25 to 100 pounds of raw herion, would take off toward the southeast, "in the direction of South Vietnam."

Withers added that he was instructed to deal for the opium in exchange for the loyalty of the Meo tribesmen who would then fight for the CIA against the various revolutionary forces in the area.

Withers admitted that he did not know "for sure" where the Air America flights eventually took their cargo. But he nsisted that, after leaving his assignment and returning to Saigon, he actually saw some of the opium - refined down to herion - being sold in the To Do street market in Saigon. He said the herion in Saigon was in bags identical to that he had seen made by the Meo tribesmen.

Withers, who is now living in Kansas, said he was extremely fearful of action being taken against him because of his testimony. He told KSFX newsman Paul Lambert that he is currently being protected against physical harm by members of the Vietnam Veterans Against the War in Kansas.

Withers reported his account to KSFX after Earth magazine in its March issue accused the CIA of supporting the heroin traffic as it made its way from Southeast Asia to the streets of the United States. Earth magazine issued a call for any potential witnesses to the smuggling to come forward and tell their stories. The CIA has refused to comment specifically on the latest charges - but CIA director Richard Helms, in a speech last year, stoutly denied any Agency connection to drug trafficking.