Supernarc Quits To Join Other Side 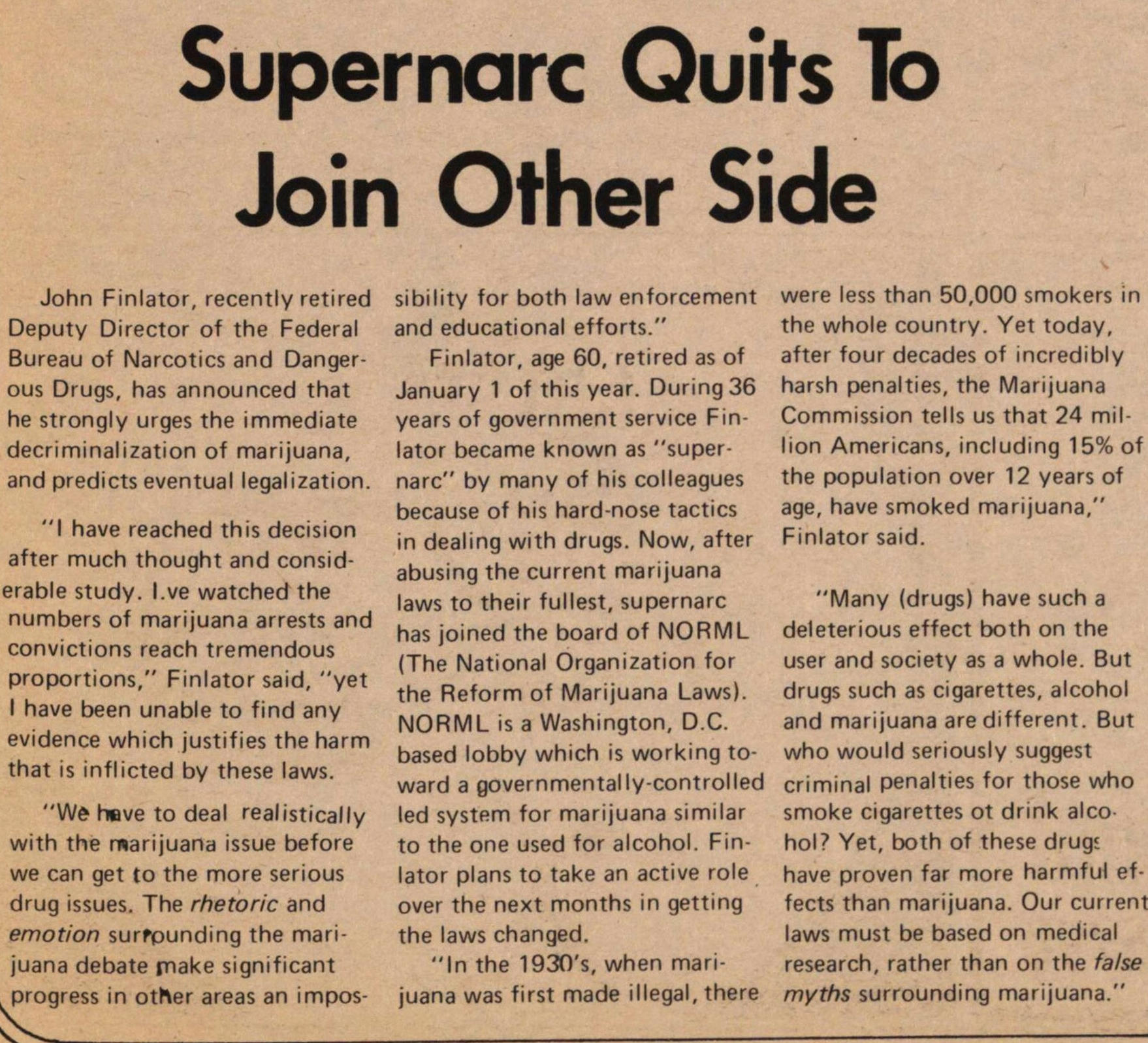 John Finlator, recently retired Deputy Director of the Federal Bureau of Narcotics and Dangerous Drugs, has announced that he strongly urges the immediate decriminalization of marijuana, and predicts eventual legalizaron. "I have reached this decisión after much thought and considerable study. l.ve watched the numbers of marijuana arrests and convictions reach tremendous proportions," Finlator said, "yet I have been unable to find any evidence which justifies the harm that is inflicted by these laws. "We heve to deal realistically with the marijuana issue before we can get to the more serious drug issues. The rhetoric and emotion surfpunding the marijuana debate make significant progress in other areas an sibility for both law enforcement and educational efforts." Finlator, age 60, retired as of January 1 of this year. During 36 years of government service Finlator became known as "supernare" by many of his colleagues because of his hard-nose tactics in dealing with drugs. Now, after abusing the current marijuana laws to their fullest, supernarc has joined the board of NORML (The National Organization for the Reform of Marijuana Laws). NORML is a Washington, D.C. based lobby which is working toward a governmentally-controlled led system for marijuana similar to the one used for alcohol. Finlator plans to take an active role over the next months in getting the laws changed. "In the 193O's, when marijuana was first made Ilegal, there were less than 50,000 smokers in the whole country. Yet today, after four decades of incredibly harsh penalties, the Marijuana Commission tells us that 24 million Americans, including 15% of the population over 12 years of age, have smoked marijuana," Finlator said. "Many (drugs) have such a deleterious effect both on the user and society as a whole. But drugs such as cigarettes, alcohol and marijuana are different. But who would seriously suggest criminal penalties for those who smoke cigarettes ot drink alcohol? Yet, both of these drugs have proven far more harmful effects than marijuana. Our current laws must be based on medical research, rather than on the false myths surrounding marijuana."