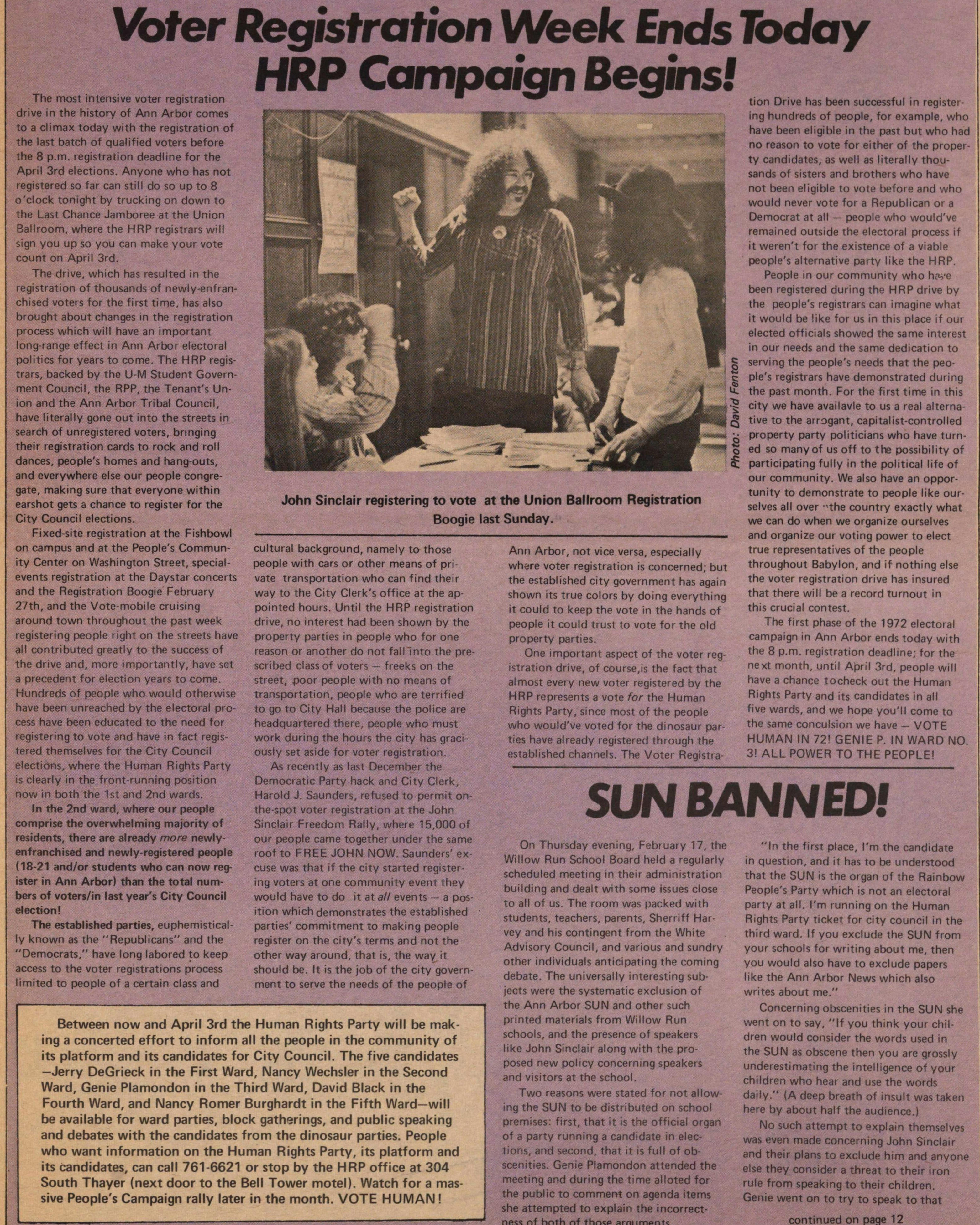 The most intensive voter registration drive in the history of Ann Arbor comes to a climax today with the registration of the last batch of qualified voters before the 8 p.m. registration deadline for the April 3rd elections. Anyone who has not registered so far can still do so up to 8 o'clock tonight by trucking on down to the Last Chance Jamboree at the Union Ballroom, where the HRP registrars will sign you up so you can make your vote count on April 3rd.

The drive, which has resulted in the registration of thousands of newly-enfranchised voters for the first time, has also brought about changes n the registration process which will have an important long-range effect in Ann Arbor electoral politics for years to come. The HRP registrars, backed by the U-M Student Government Council, the RPP, the Tenant's Union and the Ann Arbor Tribal Council, have literally gone out into the streets in search of unregistered voters, bringing their registration cards to rock and roll dances, people's homes and hang-outs, and everywhere else our people congregate, making sure that everyone within earshot gets a chance to register for the City Council elections.

Fixed-site registration at the Fishbowl on campus and at the People's Community Center on Washington Street, special events registration at the Daystar concerts and the Registration Boogie February 27th, and the Vote-mobile cruising around town throughout the past week registering people right on the streets have all contributed greatly to the success of the drive and, more importantly, have set a precedent for election years to come. Hundreds of people who would otherwise have been unreached by the electoral process have been educated to the need for registering to vote and have in fact registered themselves for the City Council elections, where the Human Rights Party is clearly in the front-running position now in both the 1st and 2nd wards.

In the 2nd ward, where our people comprise the overwhelming majority of residents, there are already more newly-enfranchised and newly-registered people (18-21 and/or students who can now register in Ann Arbor) than the total numbers of voters/in last year's City Council election!

The established parties, euphemistically known as the "Republicans" and the "Democrats," have long labored to keep access to the voter registrations process limited to people of a certain class and cultural background, namely to those people with cars or other means of private transportation who can find their way to the City Clerk's office at the appointed hours. Until the HRP registration drive, no interest had been shown by the property parties in people who for one reason or another do not fall into the prescribed class of voters -- freeks on the street, poor people with no means of transportation, people who are terrified to go to City Hall because the police are headquartered there, people who must work during the hours the city has graciously set aside for voter registration.

As recently as last December the Democratic Party hack and City Clerk, Harold J. Saunders, refused to permit on-the-spot voter registration at the John Sinclair Freedom Rally, where 15,000 of our people came together under the same roof to FREE JOHN NOW. Saunders' excuse was that if the city started registering voters at one community event they would have to do it at all events --a position which demonstrates the established parties' commitment to making people register on the city's terms and not the other way around, that is, the way it should be. It is the job of the city government to serve the needs of the people of Ann Arbor, not vice versa, especially where voter registration is concerned; but the established city government has again shown ts true colors by doing everything it could to keep the vote in the hands of people it could trust to vote for the old property parties.

One important aspect of the voter registration drive, of course, is the fact that almost every new voter registered by the HRP represents a vote for the Human Rights Party, since most of the people who would've voted for the dinosaur parties have already registered through the established channels. The Voter Registration Drive has been successful in registering hundreds of people, for example, who have been eligible in the past but who had no reason to vote for either of the property candidates, as well as literally thousands of sisters and brothers who have not been eligible to vote before and who would never vote for a Republican or a Democrat at all -- people who would've remained outside the electoral process if it weren't for the existence of a viable people's alternative party like the HRP.

People in our community who have been registered during the HRP drive by the people's registrars can imagine what it would be like for us in this place if our elected officials showed the same interest in our needs and the same dedication to serving the people's needs that the people's registrars have demonstrated during the past month. For the first time in this city we have available to us a real alternative to the arrogant, capitalist-controlled property party politicians who have turned so many of us off to the possibility of participating fully in the political life of our community. We also have an opportunity to demonstrate to people like ourselves all over the country exactly what we can do when we organize ourselves and organize our voting power to elect true representatives of the people throughout Babylon, and if nothing else the voter registration drive has insured that there will be a record turnout in this crucial contest.

The first phase of the 1972 electoral campaign in Ann Arbor ends today with the 8 p.m. registration deadline; for the next month, until April 3rd, people will have a chance to check out the Human Rights Party and its candidates in all five wards, and we hope you'll come to the same conclusion we have - VOTE HUMAN IN 72! GENIE P. IN WARD NO. 3! ALL POWER TO THE PEOPLE!

Between now and April 3rd the Human Rights Party will be making a concerted effort to inform all the people in the community of its platform and its candidates for City Council. The five candidates - Jerry DeGrieck in the First Ward, Nancy Wechsler in the Second Ward, Genie Plamondon in the Third Ward, David Black in the Fourth Ward, and Nancy Romer Burghardt in the Fifth Ward- will be available for ward parties, block gatherings, and public speaking and debates with the candidates from the dinosaur parties. People who want information on the Human Rights Party, its platform and its candidates, can call 761-6621 or stop by the HRP office at 304 South Thayer (next door to the Bell Tower motel). Watch for a massive People's Campaign rally later in the month. VOTE HUMAN!