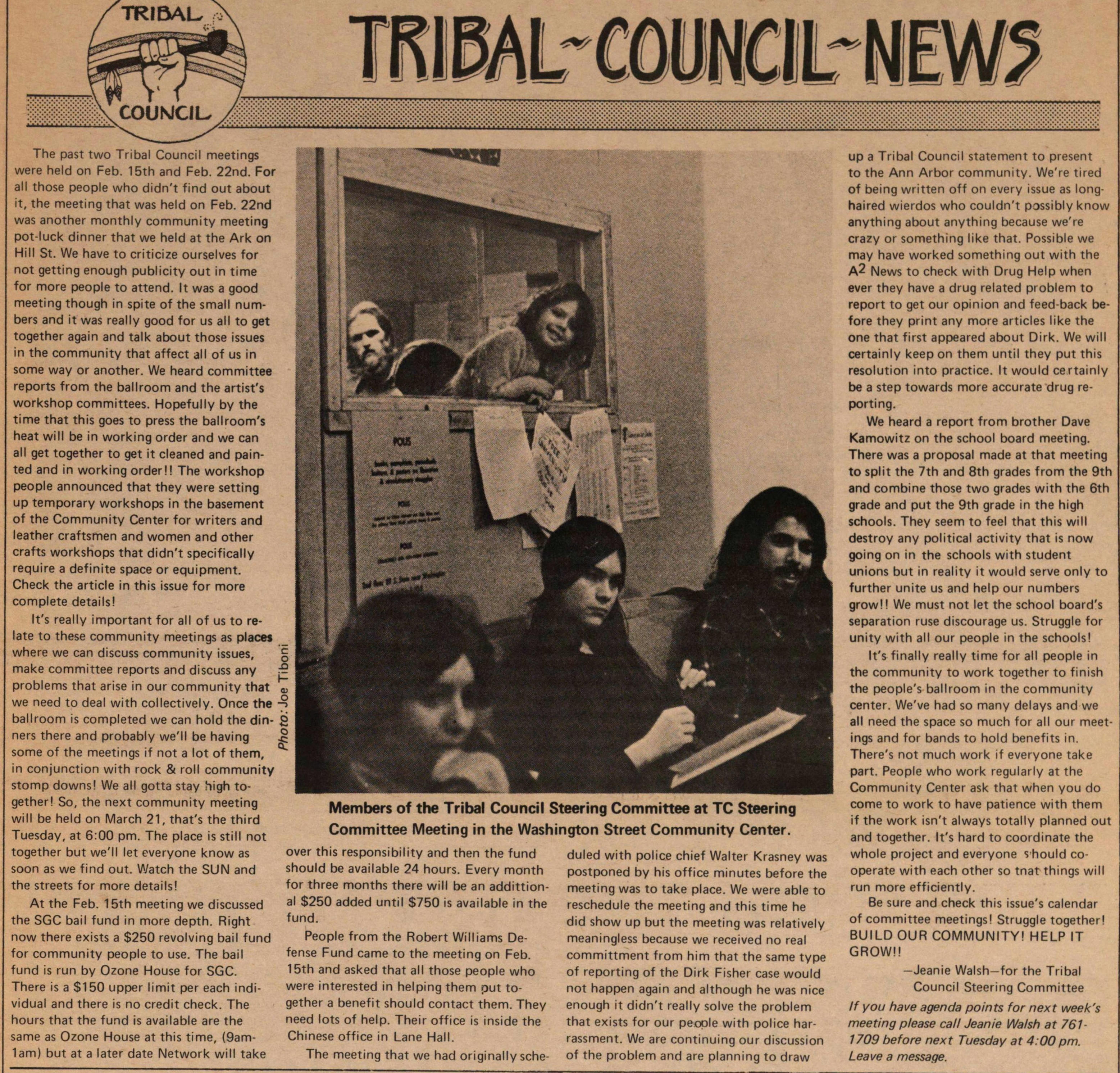 The past two Tribal Council meetings were held on Feb. 15th and Feb. 22nd. For all those people who didn't find out about it, the meeting that was held on Feb. 22nd was another monthly community meeting pot-luck dinner that we held at the Ark on Hill St. We have to criticize ourselves for not getting enough publicity out in time for more people to attend. It was a good meeting though in spite of the small numbers and it was really good for us all to get together again and talk about those issues in the community that affect all of us in some way or another. We heard committee reports from the ballroom and the artist's workshop committees. Hopefully by the time that this goes to press the ballroom's heat will be in working order and we can all get together to get it cleaned and painted and in working order!! The workshop people announced that they were setting up temporary workshops in the basement of the Community Center for writers and leather craftsmen and women and other crafts workshops that didn't specifically require a definite space or equipment. Check the article in this issue for more complete details!

It's really important for all of us to relate to these community meetings as places where we can discuss community issues, make committee reports and discuss any problems that arise in our community that we need to deal with collectively. Once the ballroom is completed we can hold the dinners there and probably we'll be having some of the meetings if not a lot of them, in conjunction with rock & roll community stomp downs! We all gotta stay high together! So, the next community meeting will be held on March 21, that's the third Tuesday, at 6:00 pm. The place is still not together but we'll let everyone know as soon as we find out. Watch the SUN and the streets for more details!

At the Feb. 15th meeting we discussed the SGC bail fund in more depth. Right now there exists a $250 revolving bail fund for community people to use. The bail fund is run by Ozone House for SGC. There s a $150 upper limit per each individual and there is no credit check. The hours that the fund is available are the same as Ozone House at this time, (9am-1am) but at a later date Network will take over this responsibility and then the fund should be available 24 hours. Every month for three months there will be an additional $250 added until $750 is available in the fund.

People from the Robert Williams Defense Fund came to the meeting on Feb. 15th and asked that all those people who were interested in helping them put together a benefit should contact them. They need lots of help. Their office is inside the Chinese office in Lane Hall.

The meeting that we had originally scheduled with police chief Walter Krasney was postponed by his office minutes before the meeting was to take place. We were able to reschedule the meeting and this time he did show up but the meeting was relatively meaningless because we received no real commitment from him that the same type of reporting of the Dirk Fisher case would not happen again and although he was nice enough it didn't really solve the problem that exists for our people with police harassment. We are continuing our discussion of the problem and are planning to draw up a Tribal Council statement to present to the Ann Arbor community. We're tired of being written off on every issue as long-haired weirdos who couldn't possibly know anything about anything because we're crazy or something like that. Possible we may have worked something out with the A2 News to check with Drug Help when ever they have a drug related problem to report to get our opinion and feedback before they print any more articles like the one that first appeared about Dirk. We will certainly keep on them until they put this resolution into practice. It would certainly be a step towards more accurate drug reporting.

We heard a report from brother Dave Kamowitz on the school board meeting. There was a proposal made at that meeting to split the 7th and 8th grades from the 9th and combine those two grades with the 6th grade and put the 9th grade in the high schools. They seem to feel that this will destroy any political activity that is now going on in the schools with student unions but in reality it would serve only to further unite us and help our numbers grow!! We must not let the school board's separation ruse discourage us. Struggle for unity with all our people in the schools!

It's finally really time for all people in the community to work together to finish the people's ballroom in the community center. We've had so many delays and we all need the space so much for all our meetings and for bands to hold benefits in. There's not much work if everyone take part. People who work regularly at the Community Center ask that when you do come to work to have patience with them if the work isn't always totally planned out and together. It's hard to coordinate the whole project and everyone should cooperate with each other so that things will run more efficiently.

Be sure and check this issue's calendar of committee meetings! Struggle together! BUILD OUR COMMUNITY! HELP IT GROW!!

If you have agenda points for next week's meeting please call Jeanie Walsh at 761-1709 before next Tuesday at 4:00 pm. Leave a message.