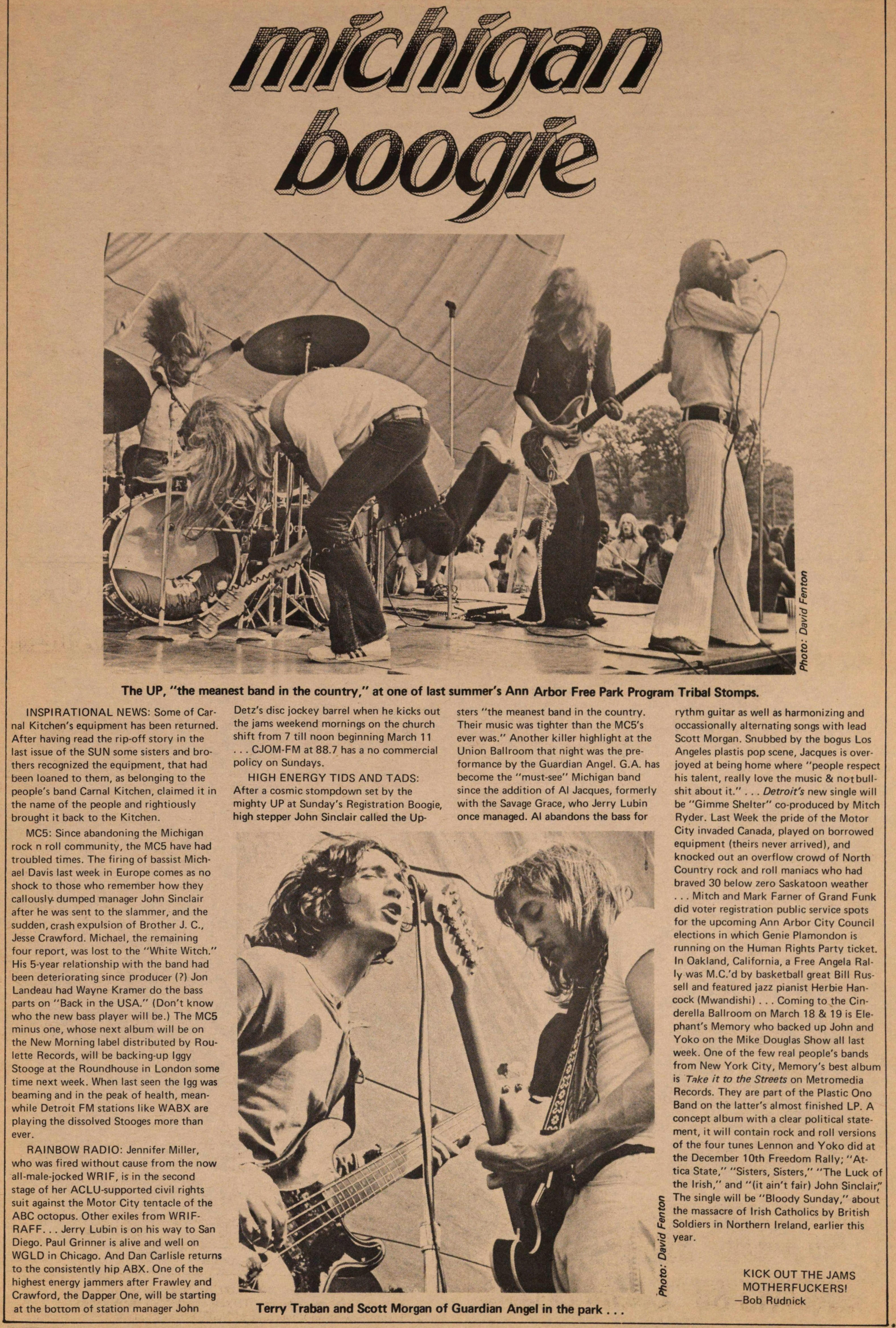 INSPIRATIONAL NEWS: Some of Carnal Kitchen's equipment has been returned. After having read the rip-off story in the last issue of the SUN some sisters and brothers recognized the equipment, that had been loaned to them, as belonging to the people's band Carnal Kitchen, claimed it in the name of the people and rightiously brought it back to the Kitchen.

MC5: Since abandoning the Michigan rock n roll community, the MC5 have had troubled times. The firing of bassist Michael Davis last week in Europe comes as no shock to those who remember how they callously-dumped manager John Sinclair after he was sent to the slammer, and the sudden, crash expulsion of Brother J. C, Jesse Crawford. Michael, the remaining four report, was lost to the "White Witch." His 5-year relationship with the band had been deteriorating since producer (?) Jon Landeau had Wayne Kramer do the bass parts on "Back in the USA." (Don't know who the new bass player will be.) The MC5 minus one, whose next album will be on the New Morning label distributed by Roulette Records, will be backing-up Iggy Stooge at the Roundhouse in London some time next week. When last seen the Igg was beaming and in the peak of health, meanwhile Detroit FM stations like WABX are playing the dissolved Stooges more than ever.

RAINBOW RADIO: Jennifer Miller, who was fired without cause from the now all-male-jocked WRIF, is in the second stage of her ACLU-supported civil rights suit against the Motor City tentacle of the ABC octopus. Other exiles from WRIF-RAFF. . . Jerry Lubin is on his way to San Diego. Paul Grinner is alive and well on WGLD in Chicago. And Dan Carlisle returns to the consistently hip ABX. One of the highest energy jammers after Frawley and Crawford, the Dapper One, will be starting at the bottom of station manager John Detz's disc jockey barrel when he kicks out the jams weekend mornings on the church shift from 7 till noon beginning March 11 . . . CJOM-FM at 88.7 has a no commercial policy on Sundays.

HIGH ENERGY TIDS AND TADS: After a cosmic stompdown set by the mighty UP at Sunday's Registration Boogie, high stepper John Sinclair called the Upsters "the meanest band in the country. Their music was tighter than the MC5's ever was." Another killer highlight at the Union Ballroom that night was the preformance by the Guardian Angel. G.A. has become the "must-see" Michigan band since the addition of Al Jacques, formerly with the Savage Grace, who Jerry Lubin once managed. Al abandons the bass for rythm guitar as well as harmonizing and occassionally alternating songs with lead Scott Morgan. Snubbed by the bogus Los Angeles plastis pop scene, Jacques is overjoyed at being home where "people respect his talent, really love the music & not bullshit about it." . . . Detroit's new single will be "Gimme Shelter" co-produced by Mitch Ryder. Last Week the pride of the Motor City invaded Canada, played on borrowed equipment (theirs never arrived), and knocked out an overflow crowd of North Country rock and roll maniacs who had braved 30 below zero Saskatoon weather . . . Mitch and Mark Farner of Grand Funk did voter registration public service spots for the upcoming Ann Arbor City Council elections in which Genie Plamondon is running on the Human Rights Party ticket. In Oakland, California, a Free Angela Rally was M.C.'d by basketball great Bill Russell and featured jazz pianist Herbie Hancock (Mwandishi) . . . Coming to the Cinderella Ballroom on March 18 & 19 is Elephant's Memory who backed up John and Yoko on the Mike Douglas Show all last week. One of the few real people's bands from New York City, Memory's best album is Take it to the Streets on Metromedia Records. They are part of the Plastic Ono Band on the latter's almost finished LP. A concept album with a clear political statement, it will contain rock and roll versions of the four tunes Lennon and Yoko did at the December 10th Freedom Rally; "Attica State," "Sisters, Sisters," "The Luck of the Irish," and "(it ain't fair) John Sinclair," The single will be "Bloody Sunday," about the massacre of Irish Catholics by British Soldiers in Northern Ireland, earlier this year.

KICK OUT THE JAMS MOTHERFUCKERS!

Terry Traban and Scott Morgan of Guardian Angel in the park...