Closer To Home On The Wiretap Ruse! 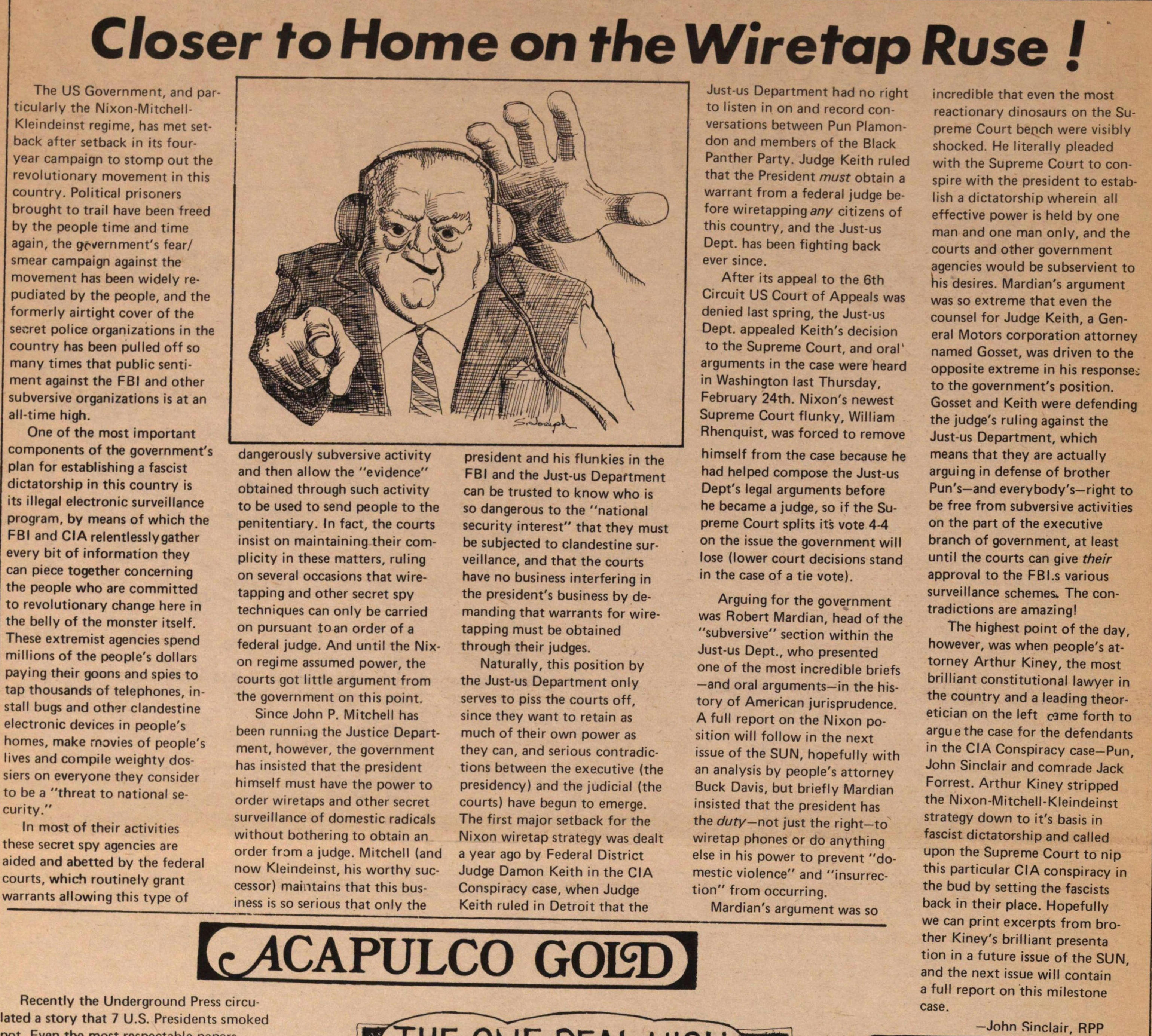 Closer to Home on the Wiretap Ruse!

The US Government, and particularly the Nixon-Mitchell-Kleindeinst regime, has met setback after setback in its four-year campaign to stomp out the revolutionary movement in this country. Political prisoners brought to trial have been freed by the people time and time again, the government's fear/smear campaign against the movement has been widely repudiated by the people, and the formerly airtight cover of the secret police organizations in the country has been pulled off so many times that public sentiment against the FBI and other subversive organizations is at an all-time high.

One of the most important components of the government's plan for establishing a fascist dictatorship in this country is its illegal electronic surveillance program, by means of which the FBI and CIA relentlessly gather every bit of information they can piece together concerning the people who are committed to revolutionary change here in the belly of the monster itself. These extremist agencies spend millions of the people's dollars paying their goons and spies to tap thousands of telephones, install bugs and other clandestine electronic devices in people's homes, make movies of people's lives and compile weighty dossiers on everyone they consider to be a "threat to national security."

In most of their activities these secret spy agencies are aided and abetted by the federal courts, which routinely grant warrants allowing this type of dangerously subversive activity and then allow the "evidence" obtained through such activity to be used to send people to the penitentiary. In fact, the courts insist on maintaining their complicity in these matters, ruling on several occasions that wiretapping and other secret spy techniques can only be carried on pursuant to an order of a federal judge. And until the Nixon regime assumed power, the courts got little argument from the government on this point.

Since John P. Mitchell has been running the Justice Department, however, the government has insisted that the president himself must have the power to order wiretaps and other secret surveillance of domestic radicals without bothering to obtain an order from a judge. Mitchell (and now Kleindeinst, his worthy successor) maintains that this business is so serious that only the president and his flunkies in the FBI and the Just-us Department can be trusted to know who is so dangerous to the "national security interest" that they must be subjected to clandestine surveillance, and that the courts have no business interfering in the president's business by demanding that warrants for wiretapping must be obtained through their judges.

Naturally, this position by the Just-us Department only serves to piss the courts off, since they want to retain as much of their own power as they can, and serious contradictions between the executive (the presidency) and the judicial (the courts) have begun to emerge. The first major setback for the Nixon wiretap strategy was dealt a year ago by Federal District Judge Damon Keith in the CIA Conspiracy case, when Judge Keith ruled in Detroit that the Just-us Department had no right to listen in on and record conversations between Pun Plamondon and members of the Black Panther Party. Judge Keith ruled that the President must obtain a warrant from a federal judge before wiretapping any citizens of this country, and the Just-us Dept. has been fighting back ever since.

After its appeal to the 6th Circuit US Court of Appeals was denied last spring, the Just-us Dept. appealed Keith's decision to the Supreme Court, and oral arguments in the case were heard in Washington last Thursday, February 24th. Nixon's newest Supreme Court flunky, William Rhenquist, was forced to remove himself from the case because he had helped compose the Just-us Dept's legal arguments before he became a judge, so if the Supreme Court splits its vote 4-4 on the issue the government will lose (lower court decisions stand in the case of a tie vote).

Arguing for the government was Robert Mardian, head of the "subversive" section within the Just-us Dept., who presented one of the most incredible briefs -- and oral arguments -- in the history of American jurisprudence. A full report on the Nixon position will follow in the next issue of the SUN, hopefully with an analysis by people's attorney Buck Davis, but briefly Mardian insisted that the president has the duty -- not just the right -- to wiretap phones or do anything else in his power to prevent "domestic violence" and "insurrection" from occurring.

Mardian's argument was so incredible that even the most reactionary dinosaurs on the Supreme Court bench were visibly shocked. He literally pleaded with the Supreme Court to conspire with the president to establish a dictatorship wherein all effective power is held by one man and one man only, and the courts and other government agencies would be subservient to his desires. Mardian's argument was so extreme that even the counsel for Judge Keith, a General Motors Corporation attorney named Gosset, was driven to the opposite extreme in his responses to the government's position. Gosset and Keith were defending the judge's ruling against the Just-us Department, which means that they are actually arguing in defense of brother Pun's -- and everybody's -- right to be free from subversive activities on the part of the executive branch of government, at least until the courts can give their approval to the FBI's various surveillance schemes. The contradictions are amazing!

The highest point of the day, however, was when people's attorney Arthur Kiney, the most brilliant constitutional lawyer in the country and a leading theoretician on the left came forth to argue the case for the defendants in the CIA Conspiracy case -- Pun, John Sinclair and comrade Jack Forrest. Arthur Kiney stripped the Nixon-Mitchell-Kleindeinst strategy down to it's basis in fascist dictatorship and called upon the Supreme Court to nip this particular CIA conspiracy in the bud by setting the fascists back in their place. Hopefully we can print excerpts from brother Kiney's brilliant presentation in a future issue of the SUN, and the next issue will contain a full report on this milestone case.