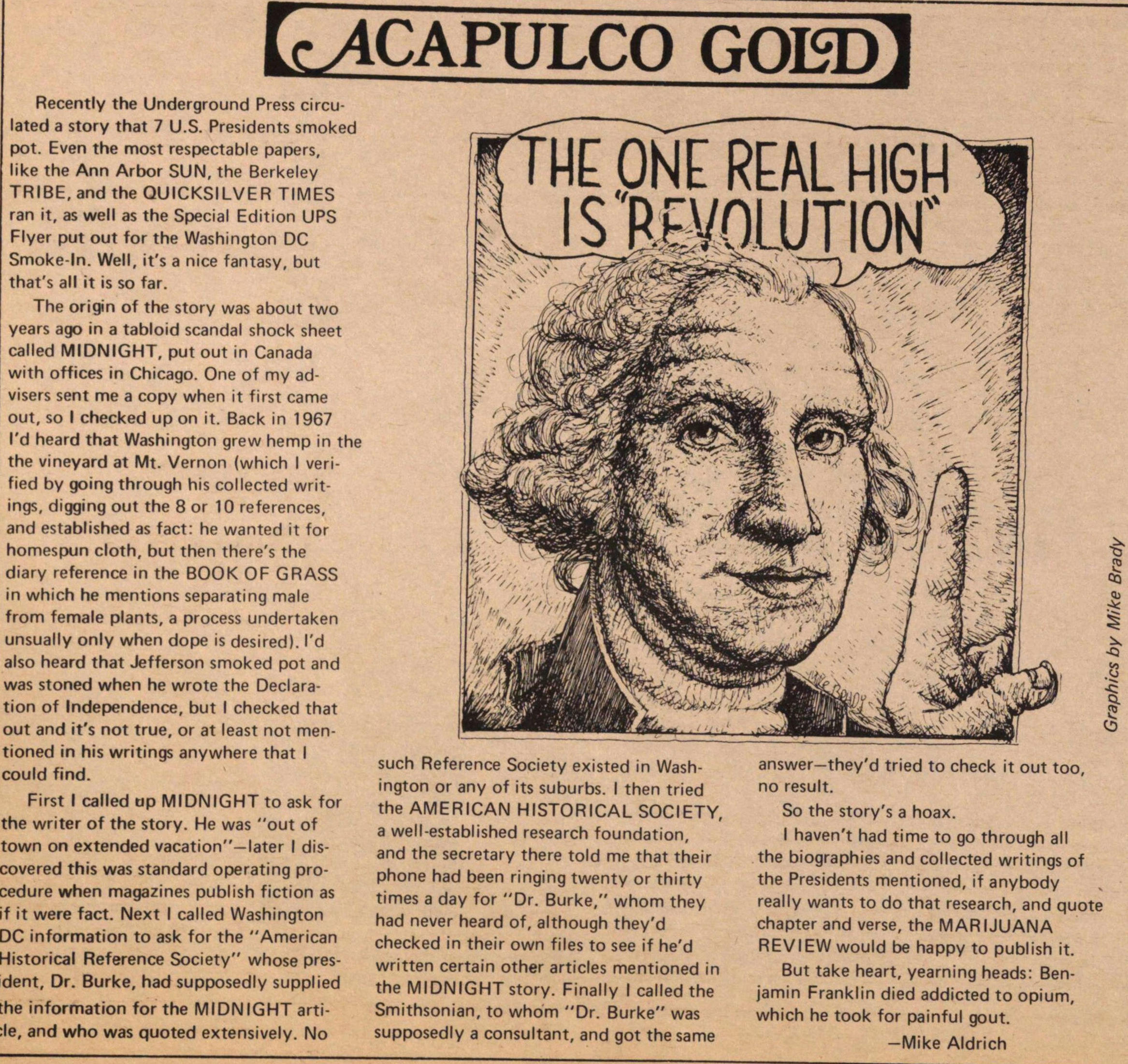 Recently the Underground Press circulated a story that 7 U.S. Presidents smoked pot. Even the most respectable papers, like the Ann Arbor SUN, the Berkeley TRIBE, and the QUICKSILVER TIMES ran it, as well as the Special Edition UPS Flyer put out for the Washington DC Smoke-ln. Well, it's a nice fantasy, but that's all it is so far.

The origin of the story was about two years ago in a tabloid scandal shock sheet called MIDNIGHT, put out in Canada with offices in Chicago. One of my advisers sent me a copy when it first came out, so I checked up on it. Back in 1967 I'd heard that Washington grew hemp in the the vineyard at Mt. Vernon (which I verified by going through his collected writings, digging out the 8 or 10 references, and established as fact: he wanted it for homespun cloth, but then there's the diary reference in the BOOK OF GRASS in which he mentions separating male from female plants, a process undertaken unsually only when dope is desired). I'd also heard that Jefferson smoked pot and was stoned when he wrote the Declaration of Independence, but I checked that out and it's not true, or at least not mentioned in his writings anywhere that I could find.

First I called up MIDNIGHT to ask for the writer of the story. He was "out of town on extended vacation" -- later I discovered this was standard operating procedure when magazines publish fiction as if it were fact. Next I called Washington DC information to ask for the "American Historical Reference Society" whose president. Dr. Burke, had supposedly supplied the information for the MIDNIGHT article, and who was quoted extensively. No such Reference Society existed in Washington or any of its suburbs. I then tried the AMERICAN HISTORICAL SOCIETY, a well-established research foundation, and the secretary there told me that their phone had been ringing twenty or thirty times a day for "Dr. Burke," whom they had never heard of, although they'd checked in their own files to see if he'd written certain other articles mentioned in the MIDNIGHT story. Finally I called the Smithsonian, to whom "Dr. Burke" was supposedly a consultant, and got the same answer -- they'd tried to check it out too, no result.

So the story's a hoax.

I haven't had time to go through all the biographies and collected writings of the Presidents mentioned, if anybody really wants to do that research, and quote chapter and verse, the MARIJUANA REVIEW would be happy to publish it.