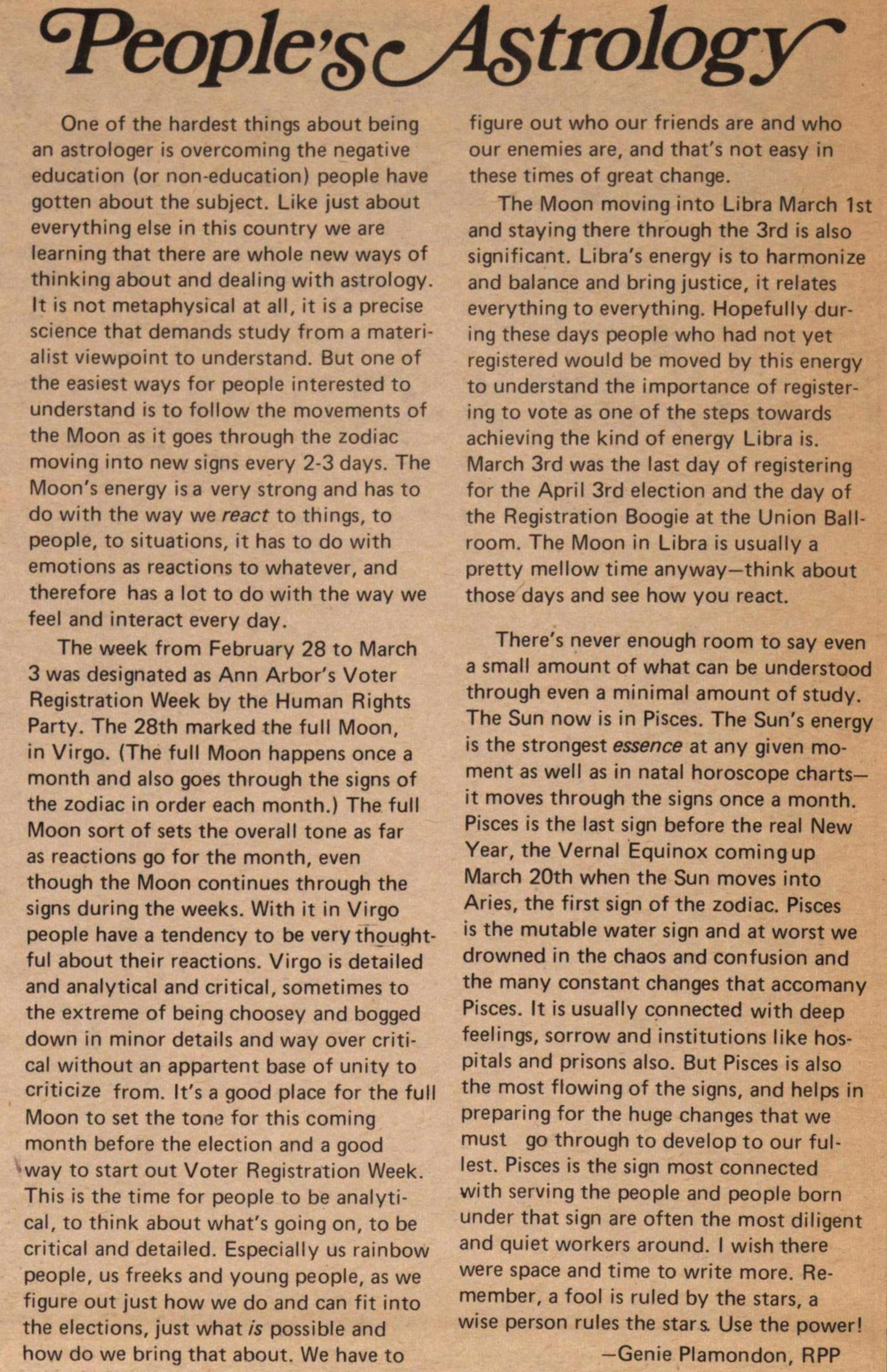 One of the hardest things about being an astrologer is overcoming the negative education (or noneducation) people have gotten about the subject. Like just about everything else in this country we are learning that there are whole new ways of thinking about and dealing with astrology. Its not metaphysical at all, it is a precise science that demands study from a materialist viewpoint to understand. But one of the easiest ways for people interested to understand is to follow the movements of the Moon as it goes through the zodiac moving into new signs every 2-3 days. The Moon's energy is very strong and has to do with the way we react to things, to people, to situations, it has to do with emotions as reactions to whatever, and therefore has a lot to do with the way we feel and interact every day. The week from February 28 to March 3 was designated as Ann Arbor's Voter Registration Week by the Human Rights Party. The 28th marked the full Moon, in Virgo. (The full Moon happens once a month and also goes through the signs of the zodiac in order each month.) The full Moon sort of sets the overall tone as far as reactions go for the month, even though the Moon continues through the signs during the weeks. With it in Virgo people have a tendency to be very thoughtful about their reactions. Virgo is detailed and analytical and critical, sometimes to the extreme of being choosy and bogged down in minor details and way over critical without an appartent base of unity to criticize from. It's a good place for the full Moon to set the tone for this coming month before the election and a good way to start out Voter Registration Week. This is the time for people to be analytical, to think about what's going on, to be critical and detailed. Especially us rainbow people, us freeks and young people, as we figure out just how we do and can fit into the elections, just what is possible and how do we bring that about. We have to figure out who our friends are and who our enemies are, and that's not easy n these times of great change. The Moon moving into Libra March 1st and staying there through the 3rd is also significant. Libra's energy is to harmonize and balance and bring justice, it relates everything to everything. Hopefully during these days people who had not yet registered would be moved by this energy to understand the importance of registering to vote as one of the steps towards achieving the kind of energy Libra is. March 3rd was the last day of registering for the April 3rd election and the day of the Registration Boogie at the Union Ballroom. The Moon in Libra is usually a pretty mellow time anyway- think about those days and see how you react. There's never enough room to say even a small amount of what can be understood through even a minimal amount of study. The Sun now is in Pisces. The Sun's energy is the strongest essence at any given moment as well as in natal horoscope charts- it moves through the signs once a month. Pisces is the last sign before the real New Year, the Vernal Equinox coming up March 20th when the Sun moves into Aries, the first sign of the zodiac. Pisces is the mutable water sign and at worst we drowned in the chaos and confusion and the many constant changes that accompany Pisces. It is usually connected with deep feelings, sorrow and institutions like hospitals and prisons also. But Pisces is also the most flowing of the signs, and helps in preparing for the huge changes that we must go through to develop our fullest. Pisces is the sign most connected with serving the people and people born under that sign are often the most diligent and quiet workers around. I wish there were space and time to write more. Remember, a fool is ruled by the stars, a wise person rules the stars. Use the power!