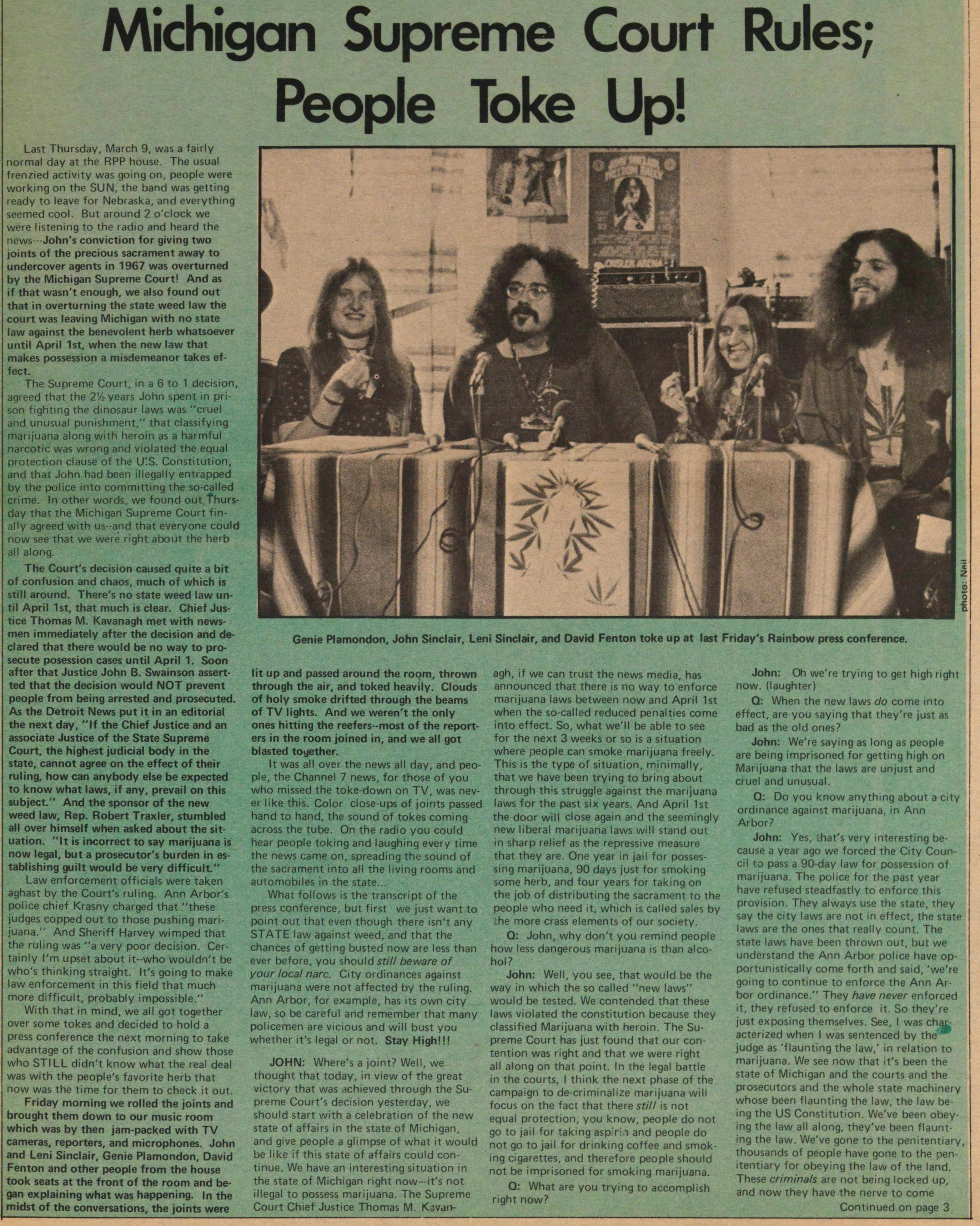 Last Thursday, March 9, was a fairly normal day at the RPP house. The usual frenzied activity was going on, people were working on the SUN, the band was getting ready to leave for Nebraska, and everything seemed cool. But around 2 o'clock we were listening to the radio and heard the news--John's conviction for giving two joints of the precious sacrament away to undercover agents in 1967 was overturned by the Michigan Supreme Court! And as if that wasn't enough, we also found out that in overturning the state weed law the court was leaving Michigan with no state law against the benevolent herb whatsoever, until April 1st, when the new law that makes possession a misdemeanor takes effect.

The Supreme Court, in a 6 to 1 decision, agreed that the 2 1/2 years John spent in prison fighting the dinosaur laws was "cruel and unusual punishment," that classifying marijuana along with heroin as a harmful narcotic was wrong and violated the equal protection clause of the U.S. Constitution, and that John had been illegally entrapped by the police into committing the so-called crime. In other words, we found out Thursday that the Michigan Supreme Court finally agreed with us--and that everyone could now see that we were right about the herb all along.

The Court's decision caused quite a bit of confusion and chaos, much of which is still around. There's no state weed law until April 1st, that much is clear. Chief Justice Thomas M. Kavanagh met with newsmen immediately after the decision and declared that there would be no way to prosecute possession cases until April 1. Soon after that Justice John B. Swainson asserted that the decision would NOT prevent people from being arrested and prosecuted. As the Detroit News put it in an editorial the next day, "If the Chief Justice and an associate Justice of the State Supreme Court, the highest judicial body in the state, cannot agree on the effect of their ruling, how can anybody else be expected to know what laws, if any, prevail on this subject." And the sponsor of the new weed law, Rep. Robert Traxler, stumbled all over himself when asked about the situation. "It is incorrect to say marijuana is now legal, but a prosecutor's burden in establishing guilt would be very difficult."

Law enforcement officials were taken aghast by the Court's ruling. Ann Arbor's police chief Krasny charged that "these judges copped out to those pushing marijuana." And Sheriff Harvey wimped that the ruling was "a very poor decision. Certainly I'm upset about it--who wouldn't be who's thinking straight. It's going to make law enforcement in this field that much more difficult, probably impossible."

With that in mind, we all got together over some tokes and decided to hold a press conference the next morning to take advantage of the confusion and show those who STILL didn't know what the real deal was with the people's favorite herb that now was the time for them to check it out.

Friday morning we rolled the joints and brought them down to our music room which was by then jam-packed with TV cameras, reporters, and microphones. John and Leni Sinclair, Genie Plamondon, David Fenton and other people from the house took seats at the front of the room and began explaining what was happening. In the midst of the conversation, the joints were lit up and passed around the room, thrown through the air, and toked heavily. Clouds of holy smoke drifted through the beams of TV lights. And we weren't the only ones hitting the reefers--most of the reporters in the room joined in, and we all got blasted together.

It was all over the news all day, and people, the Channel 7 news, for those of you who missed the toke-down on TV, was never like this. Color close-ups of joints passed hand to hand, the sound of tokes coming across the tube. On the radio you could hear people toking and laughing every time the news came on, spreading the sound of the sacrament into all the living rooms and automobiles in the state...

What follows is the transcripts of the press conference, but first we just want to point out that even though there isn't any STATE law against weed, and that the chances of getting busted now are less than ever before, you should still be aware of your local narc. City ordinances against marijuana were not affected by the ruling. Ann Arbor, for example, has it's own city law, so be careful and remember that many policemen are vicious and will bust you whether it's legal or not. Stay High!!!

JOHN: Where's a joint? Well, we thought that today, in view of the great victory that was achieved through the Supreme Court's decision yesterday, we should start with a celebration of the new state of affairs in the state of Michigan, and give people a glimpse of what it would be like if this state of affairs could continue. We have an interesting situation in the state of Michigan right now--it's not illegal to possess marijuana. The Supreme Court Chief Justice Thomas M. Kavanagh, if we can trust the news media, has announced that there is no way to enforce marijuana laws between now and April 1st when the so-called reduced penalties come into effect. So, what we'll be able to see for the next 3 weeks or so is a situation where people can smoke marijuana freely. This is the type of situation, minimally, that we have been trying to bring about through this struggle against the marijuana laws for the past six years. And April 1st the door will close again and the seemingly new liberal marijuana laws will stand out in sharp relief as the repressive measure that they are. One year in jail for possessing marijuana, 90 days just for smoking some herb, and four years for taking on the job of distributing the sacrament to the people who need it, which is called sales by the more crass elements of our society.

Q: John, why don't you remind people how less dangerous marijuana is than alcohol?

John: Well, you see, that would be the way in which the so called "news laws" would be tested. We contended that these laws violated the constitution because they classified Marijuana with heroin. The Supreme Court has just found that our contention was right and that we were right all along on that point. In the legal battle in the courts, I think the next phase of the campaign to de-criminalize marijuana will focus on the fact that there still is not equal protection, you know, people do not go to jail for taking aspirin and people do not go to jail for drinking coffee and smoking cigarettes, and therefore people should not be imprisoned for smoking marijuana.

Q: What are you trying to accomplish right now?

John: Oh we're trying to get high right not. (laughter)

Q: When the new laws do come into effect, are you saying that they're just as bad as the old ones?

John: We're saying that as long as people are being imprisoned for getting high on Marijuana that the laws are unjust and cruel and unusual.

Q: Do you know anything about a city ordinance against marijuana, in Ann Arbor?

John: Yes, that's very interesting because a year ago we forced the City Council to pass a 90-day law for possession of marijuana. The police for the past year have refused steadfastly to enforce this provision. They always  use the state, they say the city laws are not in effect, the state laws are the ones that really count. The state laws have been thrown out, but we understand the Ann Arbor police have opportunistically come forth and said, "we're going to continue to enforce the Ann Arbor ordinance." They have never enforced it, they refused to enforce it. So they're just exposing themselves. See, I was characterized when I was sentenced by the judge as "flaunting the law," in relation to marijuana. We see now that it's been the state of Michigan and the courts and the prosecutors and the whole state machinery whose been flaunting the law, the law being the US Constitution. We've been obeying the law all along, they've been flaunting the law. We've gone to the penitentiary, thousands of people have gone to the penitentiary for obeying the law of the land. These criminals are not being locked up, and now they have the nerve to come