The State Of The Campaign 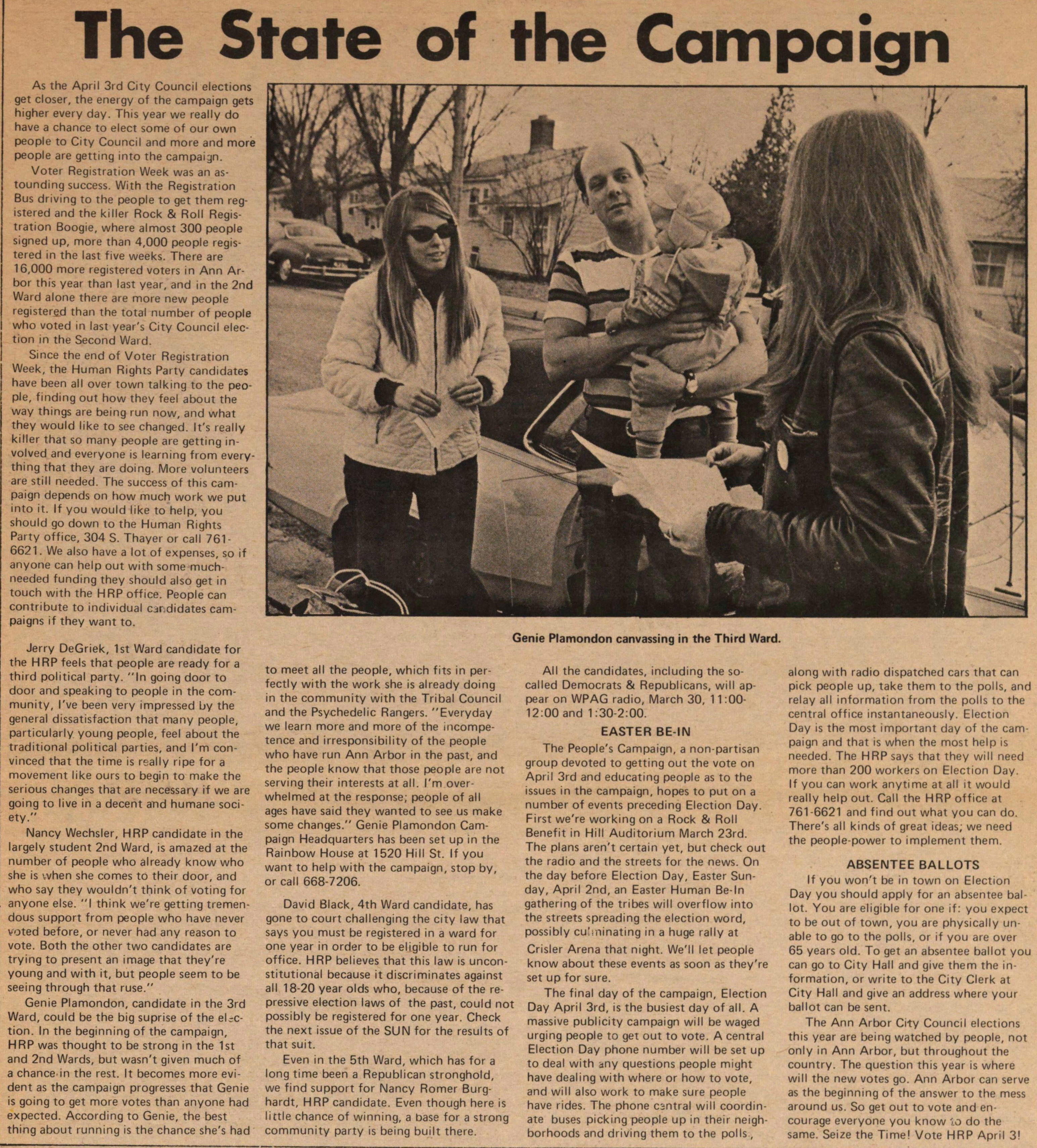 The State of the Campaign

As the April 3rd Council elections get closer, the energy of the campaign gets higher every day. This year we really do have a chance to elect some of our own people to City Council and more and more people are getting into the campaign.

Since the end of Voter Registration Week, the Human Rights Party candidates have been all over town talking to the people, finding out how they feel about the way things are being run now, and what they would like to see changed. It's really killer that so many people are getting involved and everyone is learning from everything that they are doing. More volunteers are stilt needed. The success of this campaign depends on how much work we put into it. If you would like to help, you should go down to the Human Rights Party office, 304 S. Thayer or call 761-6621. We also have a lot of expenses, so if anyone can help out with some much needed funding they should also get in touch with the HRP office. People can contribute to individual candidates campaigns if they want to.

Jerry DeGriek, 1st Ward candidate for the HRP feels that people are ready for a third political party. "In going door to door and speaking to people in the community, l've been very impressed by the general dissatisfaction that many people, particularly young people, feel about the traditional political parties, and l'm convinced that the time is really ripe for a movement like ours to begin to make the serious changes that are necessary if we are going to live in a decent and humane society."

Nancy Wechsler, HRP candidate in the largely student 2nd Ward, is amazed at the number of people who already know who she is when she comes to their door, and who say they wouldn't think of voting for anyone else. "I think we're getting tremendous support from people who have never voted before, or never had any reason to vote. Both the other two candidates are trying to present an image that they' re young and with it, but people seem to be seeing through that ruse."

Genie Plamondon, candidate in the 3rd Ward, could be the big surprise of the election. In the beginning of the campaign, HRP was thought to be strong in the 1st and 2nd Wards, but wasn't given much of a chance in the rest. It becomes more evident as the campaign progresses that Genie is going to get more votes than anyone had expected. According to Genie, the best thing about running is the chance she's had to meet all the people, which fits n perfectly with the work she is already doing in the community with the Tribal Council and the Psychedelic Rangers. "Everyday we learn more and more of the incompetence and irresponsibility of the people who have run Ann Arbor in the past, and the people know that those people are not serving their interests at all. l'm overwhelmed at the response; people of all ages have said they wanted to see us make some changes." Genie Plamondon Campaign Headquarters has been set up in the Rainbow House at 1520 Hill St. If you want to help with the campaign, stop by, or call 668-7206.

David Black, 4th Ward candidate, has gone to court challenging the city law that says you must be registered in a ward for one year n order to be eligible to run for office. HRP believes that this law is unconstitutional because it discriminates against all 18-20 year olds who, because of the repressive election laws of the past, could not possibly be registered for one year. Check the next issue of the SUN for the results of that suit.

Even in the 5th Ward, which has for a long time been a Republican stronghold, we find support for Nancy Romer Burghardt, HRP candidate. Even though here is little chance of winning, a base for a strong community party is being built there.

The People's Campaign, a non-partisan group devoted to getting out the vote on April 3rd and educating people as to the issues in the campaign, hopes to put on a number of events preceding Election Day. First we're working on a Rock & Roll Benefit in Hill Auditorium March 23rd. The plans aren't certain yet, but check out the radio and the streets for the news. On the day before Election Day, Easter Sunday. April 2nd, an Easter Human Be-In gathering of the tribes will overflow into the streets spreading the election word, possibly culminating in a huge rally at Crisler Arena that night. We'll let people know about these events as soon as they're set up for sure.

The final day of the campaign, Election Day April 3rd, is the busiest day of all. A massive publicity campaign will be waged urging people to get out to vote. A central Election Day phone number will be set up to deal with any questions people might have dealing with where or how to vote, and will also work to make sure people have rides. The phone central will coordinate buses picking people up in their neighborhoods and driving them to the polls , along with radio dispatched cars that can pick people up, take them to the polls, and relay all information from the polls to the central office instantaneously. Election Day is the most important day of the campaign and that is when the most help is needed. The HRP says that they will need more than 200 workers on Election Day. If you can work anytime at all it would really help out. Cali the HRP office at 761-6621 and find out what you can do. There's all kinds of great ideas; we need the people-power to implement them.

If you won't be in town on Election Day you should apply for an absentee ballot. You are eligible for one if : you expect to be out of town, you are physically unable to go to the polls, or f you are over 65 years old. To get an absentee ballot you can go to City Hall and give them the information, or write to the City Clerk at City Hall and give an address where your ballot can be sent.

The Ann Arbor City Council elections this year are being watched by people, not only in Ann Arbor, but throughout the country. The question this year is where will the new votes go. Ann Arbor can serve as the beginning of the answer to the mess around us. So get out to vote and encourage everyone you know to do the same. Seize the Time! Vote HRP April 3!