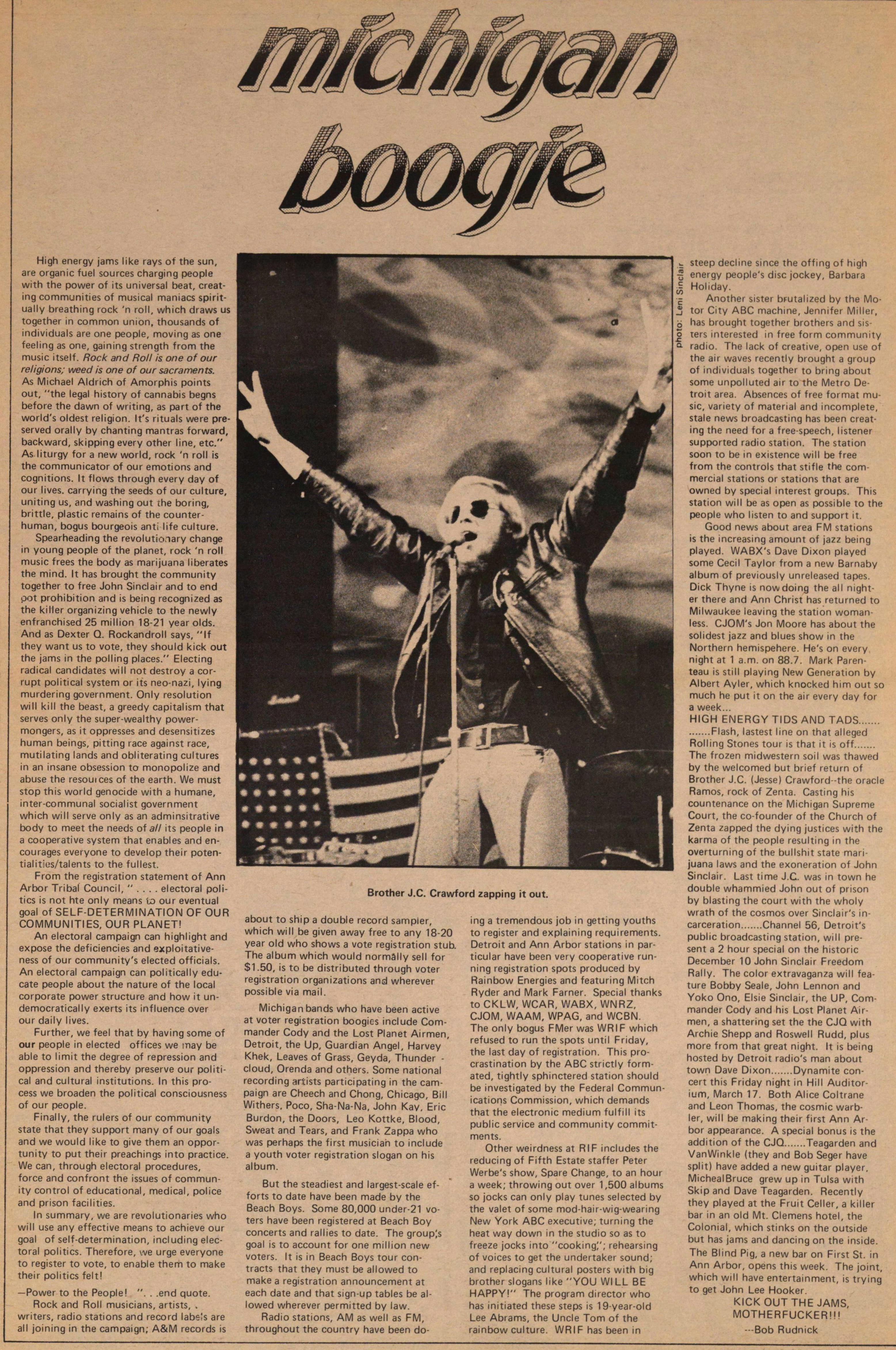 High energy jams like rays of the sun, are organic fuel sources charging people with the power of its universal beat, creating communities of musical maniacs spiritually breathing rock 'n roll, which draws us together in common union, thousands of individuals are one people, moving as one feeling as one, gaining strength from the music itself. Rock and Roll is one of our religions; weed is one of our sacraments. As Michael Aldrich of Amorphis points out, "the legal history of cannabis begins before the dawn of writing, as part of the world's oldest religion. It's rituals were preserved orally by chanting mantras forward, backward, skipping every other line, etc." As liturgy for a new world, rock 'n roll is the communicator of our emotions and cognitions. It flows through every day of our lives. carrying the seeds of our culture, uniting us, and washing out the boring, brittle, plastic remains of the counter-human, bogus bourgeois anti life culture.

Spearheading the revolutionary change in young people of the planet, rock 'n roll music frees the body as marijuana liberates the mind. It has brought the community together to free John Sinclair and to end pot prohibition and is being recognized as the killer organizing vehicle to the newly enfranchised 25 million 18-21 year olds. And as Dexter Q. Rockandroll says, "If they want us to vote, they should kick out the jams in the polling places." Electing radical candidates will not destroy a corrupt political system or its neo-nazi, lying murdering government. Only resolution will kill the beast, a greedy capitalism that serves only the super-wealthy powermongers, as it oppresses and desensitizes human beings, pitting race against race, mutilating lands and obliterating cultures in an insane obsession to monopolize and abuse the resources of the earth. We must stop this world genocide with a humane, inter-communal socialist government which will serve only as an adminsitrative body to meet the needs of all its people in a cooperative system that enables and encourages everyone to develop their potentialities/talents to the fullest.

From the registration statement of Ann Arbor Tribal Council, " . . . . electoral politics is not the only means to our eventual goal of SELF-DETERMINATION OF OUR COMMUNITIES, OUR PLANET!

Further, we feel that by having some of our people in elected offices we may be able to limit the degree of repression and oppression and thereby preserve our political and cultural institutions. In this process we broaden the political consciousness of our people.

Finally, the rulers of our community state that they support many of our goals and we would like to give them an opportunity to put their preachings into practice. We can, through electoral procedures, force and confront the issues of community control of educational, medical, police and prison facilities.

In summary, we are revolutionaries who will use any effective means to achieve our goal of self-determination, including electoral politics. Therefore, we urge everyone to register to vote, to enable them to make their politics felt!

-Power to the People! ". . .end quote. Rock and Roll musicians, artists, writers, radio stations and record labels are all joining in the campaign; A&M records is about to ship a double record sampler, which will be given away free to any 18-20 year old who shows a vote registration stub. The album which would normally sell for $1.50, is to be distributed through voter registration organizations and wherever possible via mail.

Michigan bands who have been active at voter registration boogies include Commander Cody and the Lost Planet Airmen, Detroit, the Up, Guardian Angel, Harvey Khek, Leaves of Grass, Geyda, Thunder - cloud, Orenda and others. Some national recording artists participating in the campaign are Cheech and Chong, Chicago, Bill Withers. Poco, Sha -Na-Na, John Kav, Eric Burdon, the Doors, Leo Kottke, Blood, Sweat and Tears, and Frank Zappa who was perhaps the first musician to include a youth voter registration slogan on his album.

But the steadiest and largest-scale efforts to date have been made by the Beach Boys. Some 80,000 under-21 voters have been registered at Beach Boy concerts and rallies to date. The groups goal is to account for one million new voters. It is in Beach Boys tour contracts that they must be allowed to make a registration announcement at each date and that sign-up tables be allowed wherever permitted by law. Radio stations, AM as well as FM, throughout the country have been doing a tremendous job in getting youths to register and explaining requirements. Detroit and Ann Arbor stations in particular have been very cooperative running registration spots produced by Rainbow Energies and featuring Mitch Ryder and Mark Farner. Special thanks to CKLW, WCAR, WABX, WNRZ, CJOM, WAAM, WPAG, and WCBN. The only bogus FMer was WRIF which refused to run the spots until Friday, the last day of registration. This procrastination by the ABC strictly formated, tightly sphinctered station should be investigated by the Federal Communications Commission, which demands that the electronic medium fulfill its public service and community commitments.

Other weirdness at RIF includes the reducing of Fifth Estate staffer Peter Werbe's show, Spare Change, to an hour a week; throwing out over 1,500 albums so jocks can only play tunes selected by the valet of some mod-hair-wig-wearing New York ABC executive; turning the heat way down in the studio so as to freeze jocks into "cooking"; rehearsing of voices to get the undertaker sound; and replacing cultural posters with big brother slogans like "YOU WILL BE HAPPY!" The program director who has initiated these steps is 19-year-old Lee Abrams, the Uncle Torn of the rainbow culture. WRIF has been in steep decline since the offing of high energy people's disc jockey. Barbara Holiday.

Another sister brutalized by the Motor City ABC machine, Jennifer Miller, has brought together brothers and sisters interested in free form community radio. The lack of creative, open use of the air waves recently brought a group of individuals together to bring about some unpolluted air to the Metro Detroit area. Absences of free format music, variety of material and incomplete, stale news broadcasting has been creating the need for a free-speech, listener supported radio station. The station soon to be in existence will be free from the controls that stifle the commercial stations or stations that are owned by special interest groups. This station will be as open as possible to the people who listen to and support it.

Good news about area FM stations is the increasing amount of jazz being played. WABX's Dave Dixon played some Cecil Taylor from a new Barnaby album of previously unreleased tapes. Dick Thyne is now doing the all-nighter there and Ann Christ has returned to Milwaukee leaving the station womanless. CJOM's Jon Moore has about the solidest jazz and blues show in the Northern hemispehere. He's on every night at 1 a.m. on 88.7. Mark Parenteau is still playing New Generation by Albert Ayler, which knocked him out so much he put it on the air every day for a week...

HIGH ENERGY TIDS AND TADS....Flash, latest line on that alleged Rolling Stones tour is that it is off ....

The frozen midwestern soil was thawed by the welcomed but brief return of Brother J.C. (Jesse) Crawford -the oracle Ramos, rock of Zenta. Casting his countenance on the Michigan Supreme Court, the co-founder of the Church of Zenta zapped the dying justices with the karma of the people resulting in the overturning of the bullshit state marijuana laws and the exoneration of John Sinclair. Last time J.C. was in town he double whammied John out of prison by blasting the court with the wholy wrath of the cosmos over Sinclair's incarceration Channel 56, Detroit's public broadcasting station, will present a 2 hour special on the historic December 10 John Sinclair Freedom Rally. The color extravaganza will feature Bobby Seale, John Lennon and Yoko Ono, Elsie Sinclair, the UP, Commander Cody and his Lost Planet Airmen, a shattering set the the CJQ with Archie Shepp and Roswell Rudd, plus more from that great night. It is being hosted by Detroit radio's man about town Dave Dixon.... Dynamite concert this Friday night in Hill Auditorium, March 17. Both Alice Coltrane and Leon Thomas, the cosmic warbIer, will be making their first Ann Arbor appearance. A special bonus is the addition of the CJQ.... Teagarden and VanWinkle (they and Bob Seger have split) have added a new guitar player. Micheal Bruce grew up in Tulsa with Skip and Dave Teagarden.

Recently they played at the Fruit Celler, a killer bar in an old Mt. Clemens hotel, the Colonial, which stinks on the outside but has jams and dancing on the inside.

The Blind Pig, a new bar on First St. in Ann Arbor, opens this week. The joint, which will have entertainment, is trying to get John Lee Hooker.

KICK OUT THE JAMS, MOTHERFUCKER!!!