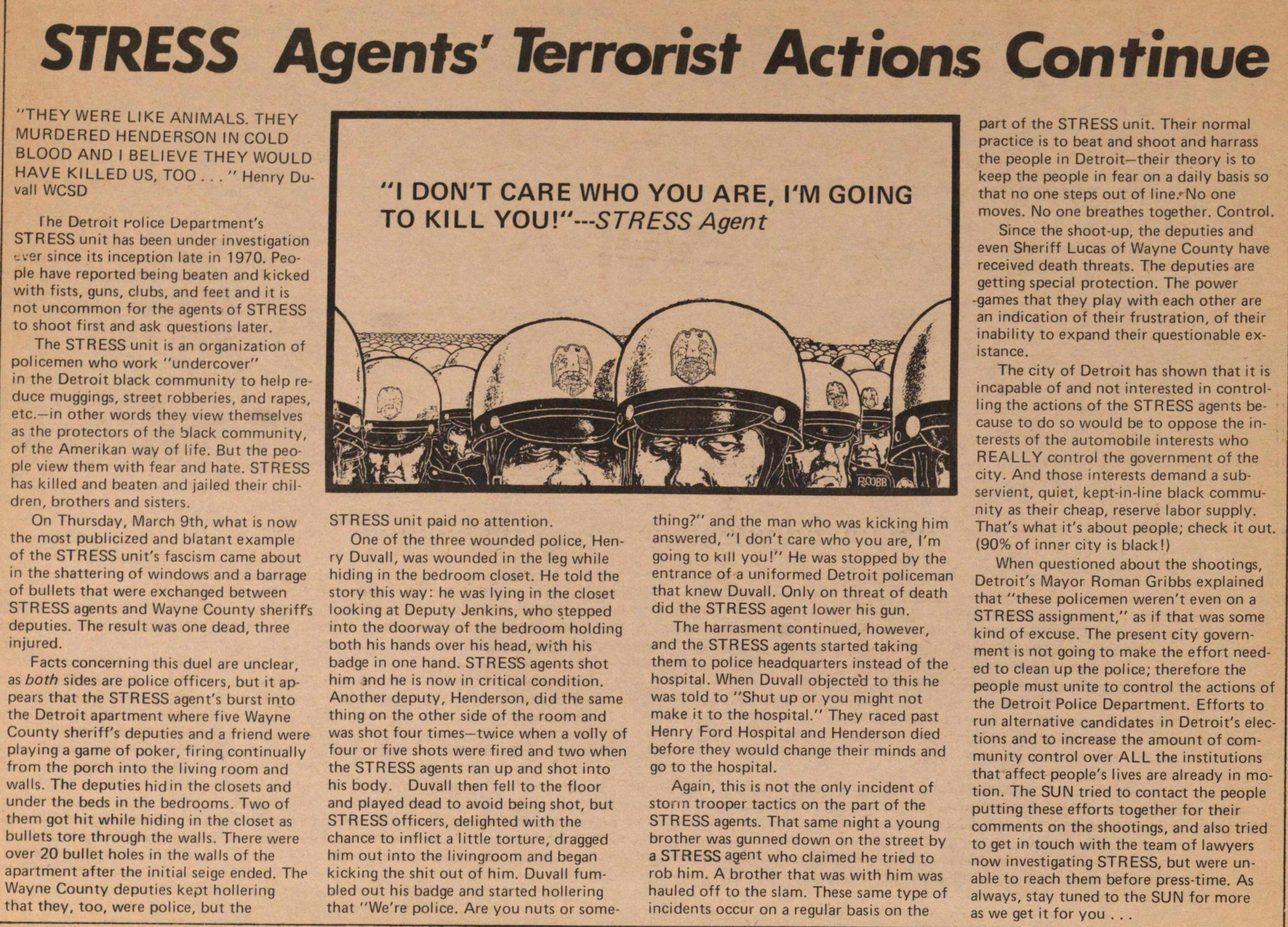 "THEY WERE LIKE ANIMALS. THEY MURDERED HENDERSON IN COLD BLOOD AND I BELIEVE THEY WOULD HAVE KILLED US, TOO ..." Henry Duvall WCSD

The Detroit Police Department's STRESS unit has been under investigation ever since its inception late in 1970. People have reported being beaten and kicked with fists, guns, clubs, and feet and it is not uncommon for the agents of STRESS to shoot first and ask questions later.

The STRESS unit is an organization of policemen who work "undercover" in the Detroit black community to help reduce muggings, street robberies, and rapes, etc.- in other words they view themselves as the protectors of the black community, of the Amerikan way of life. But the people view them with fear and hate. STRESS has killed and beaten and jailed their children, brothers and sisters.

On Thursday, March 9th, what is now the most publicized and blatant example of the STRESS unit's fascism came about in the shattering of windows and a barrage of bullets that were exchanged between STRESS agents and Wayne County sheriffs deputies. The result was one dead, three injured.

Facts concerning this duel are unclear, as both sides are police officers, but it appears that the STRESS agent's burst into the Detroit apartment where five Wayne County sheriff's deputies and a friend were playing a game of poker, firing continually from the porch into the living room and walls. The deputies hid in the closets and under the beds in the bedrooms. Two of them got hit while hiding in the closet as bullets tore through the walls. There were over 20 bullet holes in the walls of the apartment after the initial siege ended. The Wayne County deputies kept hollering that they, too, were police, but the STRESS unit paid no attention.

One of the three wounded police, Henry Duvall, was wounded in the leg while hiding in the bedroom closet. He told the story this way: he was lying in the closet looking at Deputy Jenkins, who stepped into the doorway of the bedroom holding both his hands over his head, with his badge in one hand. STRESS agents shot him and he is now in critical condition. Another deputy, Henderson, did the same thing on the other side of the room and was shot four times- twice when a volley of four or five shots were fired and two when the STRESS agents ran up and shot into his body. Duvall then fell to the floor and played dead to avoid being shot, but STRESS officers, delighted with the chance to inflict a little torture, dragged him out into the living room and began kicking the shit out of him. Duvall fumbled out his badge and started hollering that "We're police. Are you nuts or something?" and the man who was kicking him answered, "I don't care who you are, l'm going to kill you!" He was stopped by the entrance of a uniformed Detroit policeman that knew Duvall. Only on threat of death did the STRESS agent lower his gun.

The harassment continued, however, and the STRESS agents started taking them to police headquarters instead of the hospital. When Duvall objected to this he was told to "Shut up or you might not make it to the hospital." They raced past Henry Ford Hospital and Henderson died before they would change their minds and go to the hospital.

Again, this is not the only incident of storm trooper tactics on the part of the STRESS agents. That same night a young brother was gunned down on the street by a STRESS agent who claimed he tried to rob him. A brother that was with him was hauled off to the slam. These same type of incidents occur on a regular basis on the part of the STRESS unit. Their normal practice is to beat and shoot and harass the people in Detroit- their theory is to keep the people in fear on a daily basis so that no one steps out of line. No one moves. No one breathes together. Control.

Since the shoot-up, the deputies and even Sheriff Lucas of Wayne County have received death threats. The deputies are getting special protection. The power games that they play with each other are an indication of their frustration, of their inability to expand their questionable existence.

The city of Detroit has shown that it is incapable of and not interested in controlling the actions of the STRESS agents because to do so would be to oppose the interests of the automobile interests who REALLY control the government of the city. And those interests demand a subservient, quiet, kept-in-line black community as their cheap, reserve labor supply. That's what it's about people; check it out. (90% of inner city is black!)

When questioned about the shootings, Detroit's Mayor Roman Gribbs explained that "these policemen weren't even on a STRESS assignment," as if that was some kind of excuse. The present city government is not going to make the effort needed to clean up the police; therefore the people must unite to control the actions of the Detroit Police Department. Efforts to run alternative candidates in Detroit's elections and to increase the amount of community control over ALL the institutions that affect people's lives are already in motion. The SUN tried to contact the people putting these efforts together for their comments on the shootings, and also tried to get in touch with the team of lawyers now investigating STRESS, but were unable to reach them before press-time. As always, stay tuned to the SUN for more as we get it for you . . .