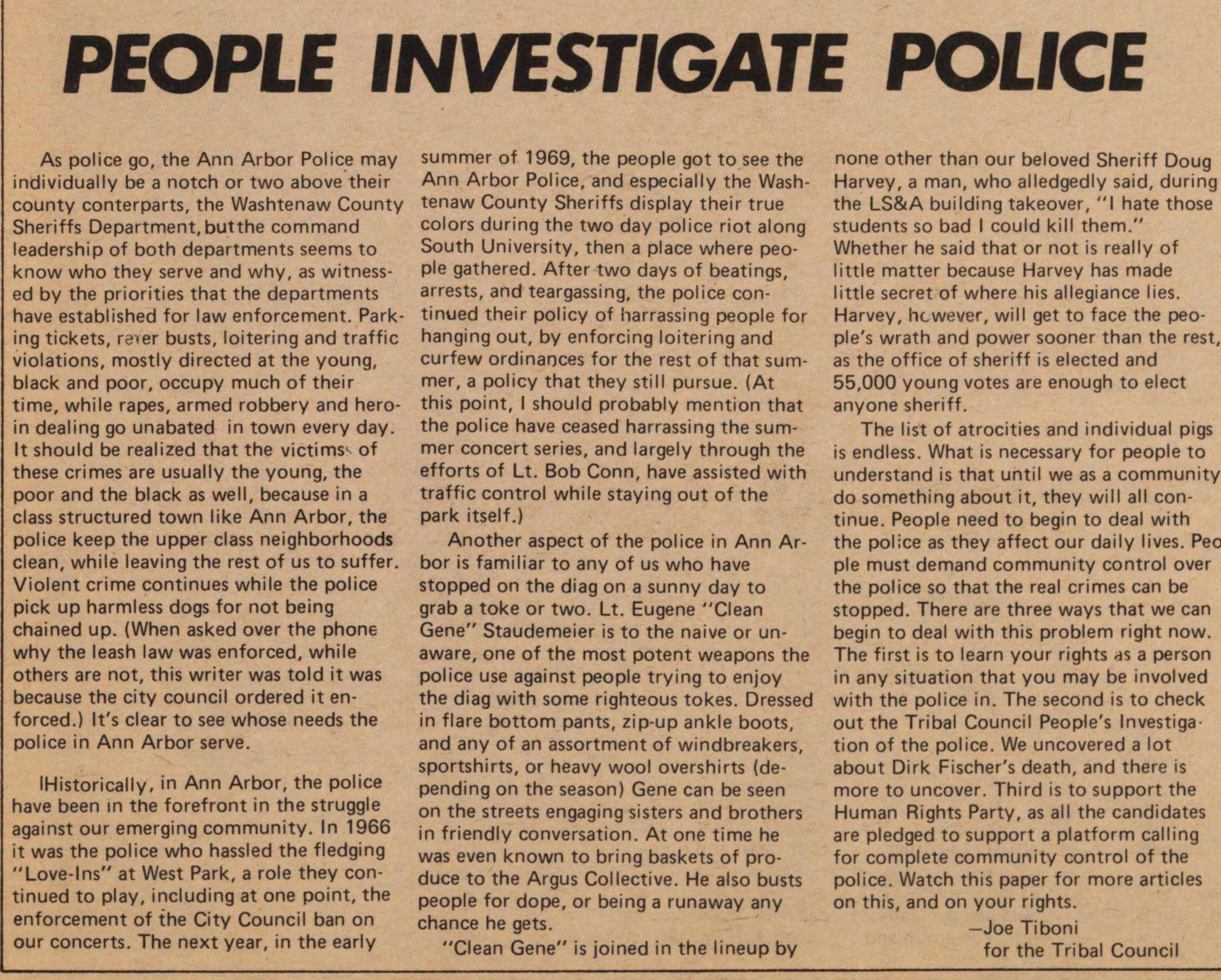 As pólice go, the Ann Arbor Pólice may individually be a notch or two above their county conterparts, the Washtenaw County Sheriffs Department, butthe command leadership of both departments seems to know who they serve and why, as witnessed by the priorities that the departments have established for law enforcement. Parking tickets, rtíer busts, loitering and traffic violations, mostly directed at the young, black and poor, occupy much of their time, while rapes, armed robbery and heroin dealing go unabated in town every day. It should be realized that the victims of these crimes are usually the young, the poor and the black as well, because in a class structured town like Ann Arbor, the pólice keep the upper class neighborhoods clean, while leaving the rest of us to suffer. Violent crime continúes while the pólice piek up harmless dogs for not being chained up. (When asked over the phone why the leash law was enforced, while others are not, this writer was told t was because the city council ordered it enforced.) It's clear to see whose needs the pólice in Ann Arbor serve. IHistorically, in Ann Arbor, the pólice have been in the forefront in the struggle against our emerging community. In 1966 t was the pólice who hassled the fledging "Love-lns" at West Park, a role they continued to play, including at one point, the enforcement of the City Council ban on our concerts. The next year, in the early summer of 1969, the people got to see the Ann Arbor Pólice, and especially the Washtenaw County Sheriffs display their true colors during the two day pólice riot along South University, then a place where people gathered. After two days of beatings, arrests, and teargassing, the pólice continued their policy of harrassing people for hanging out, by enforcing loitering and curfew ordinances for the rest of that summer, a policy that they still pursue. (At this point, I should probably mention that the pólice have ceased harrassing the summer concert series, and largely through the efforts of Lt. Bob Conn, have assisted with traffic control while staying out of the park tself.) Another aspect of the pólice in Ann Arbor is familiar to any of us who have stopped on the diag on a sunny day to grab a toke or two. Lt. Eugene "Clean Gene" Staudemeier is to the naive or unaware, one of the most potent weapons the pólice use against people trying to enjoy the diag with some righteous tokes. Dressed in fiare bottom pants, zip-up ankle boots, and any of an assortment of windbreakers, sportshirts, or heavy wool overshirts (depending on the season) Gene can be seen on the streets engaging sisters and brothers in friendly conversation. At one time he was even known to bring baskets of produce to the Argus Collective. He also busts people for dope, or being a runaway any chance he gets. "Clean Gene" is joined in the lineup by none other than our beloved Sheriff Doug Harvey, a man, who alledgedly said, during the LS&A building takeover, "I hate those students so bad I could kill them." Whether he said that or not is really of little matter because Harvey has made little secret of where bis allegiance lies. Harvey, hc wever, will get to face the people's wrath and power sooner than the rest, as the office of sheriff is elected and 55,000 young votes are enough to elect anyone sheriff. The list of atrocities and individual pigs is endless. What is necessary for people to understand is that until we as a community do something about it, they will all continue. People need to begin to deal with the pólice as they affect our daily lives. Pee ple must demand community control over the pólice so that the real crimes can be stopped. There are three ways that we can begin to deal with this problem right now. The first is to learn your rights as a person in any situation that you may be nvolved with the pólice in. The second is to check out the Tribal Council People's Investigation of the pólice. We uncovered a lot about Dirk Fischer's death, and there is more to uncover. Third is to support the Human Rights Party, as all the candidates are pledged to support a platform calling for complete community control of the pólice. Watch this paper for more articles on this, and on your rights. tor the I ribal Louncii