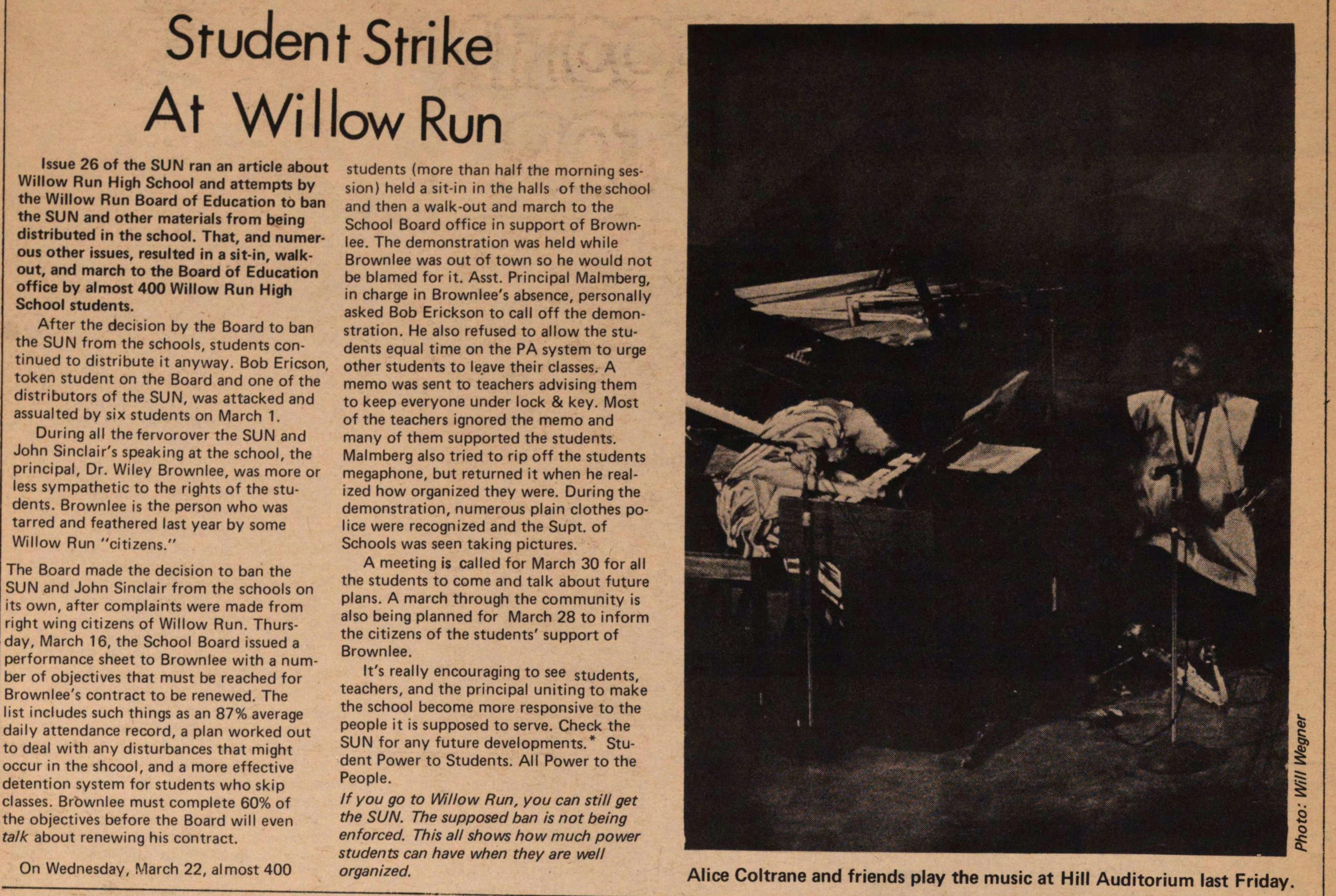 After the decision by the Board to ban the SUN from the schools, students continued to distribute it anyway. Bob Ericson, token student on the Board and one of the distributors of the SUN, was attacked and assaulted by six students on March 1. During all the fervor over the SUN and John Sinclair's speaking at the school, the principal. Dr. Wiley Brownlee, was more or less sympathetic to the rights of the students. Brownlee is the person who was tarred and feathered last year by some Willow Run "citizens."

The Board made the decision to ban the SUN and John Sinclair from the schools on its own, after complaints were made from right wing citizens of Willow Run. Thursday, March 16, the School Board issued a performance sheet to Brownlee with a number of objectives that must be reached for Brownlee's contract to be renewed. The list includes such things as an 87% average daily attendance record, a plan worked out to deal with any disturbances that might occur in the school, and a more effective detention system for students who skip classes. Brownlee must complete 60% of he objectives before the Board will even talk about renewing his contract.

On Wednesday, March 22, almost 400 students (more than half the morning session) held a sit-in in the halls of the school and then a walk-out and march to the School Board office in support of Brownlee. The demonstration was held while Brownlee was out of town so he would not be blamed for it. Asst. Principal Malmberg, in charge in Brownlee's absence, personally asked Bob Erickson to call off the demonstration. He also refused to allow the students equal time on the PA system to urge other students to leave their classes. A memo was sent to teachers advising them to keep everyone under lock & key. Most of the teachers ignored the memo and many of them supported the students. Malmberg also tried to rip off the students megaphone, but returned it when he realized how organized they were. During the demonstration, numerous plain clothes police were recognized and the Supt. of Schools was seen taking pictures.

A meeting is called for March 30 for all the students to come and talk about future plans. A march through the community is also being planned for March 28 to inform the citizens of the students' support of Brownlee.

It's really encouraging to see students, teachers, and the principal uniting to make the school become more responsive to the people it is supposed to serve. Check the SUN for any future developments.

Student Power to Students. All Power to the People.

If you go to Willow Run, you can still get the SUN. The supposed ban is not being enforced. This all shows how much power students can have when they are well organized.