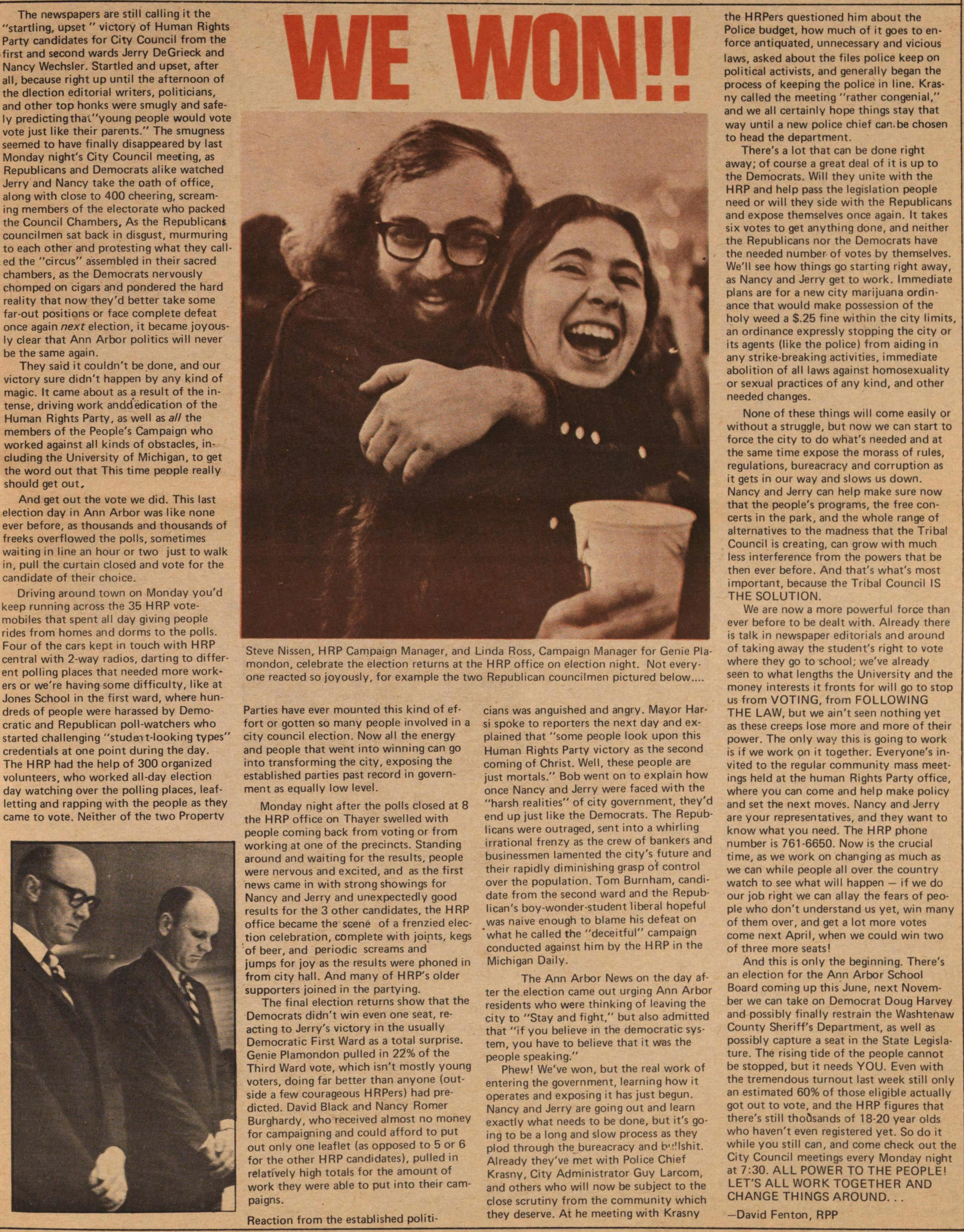 The newspapers are still calling it the "startling, upset " victory of Human Rights Party candidates for City Council from the first and second wards Jerry DeGrieck and Nancy Wechsler. Startled and upset, after all, because right up until the afternoon of the election editorial writers, politicians, and other top honks were smugly and safely predicting that "young people would vote vote just like their parents." The smugness seemed to have finally disappeared by last Monday night's City Council meeting, as Republicans and Democrats alike watched Jerry and Nancy take the oath of office, along with close to 400 cheering, screaming members of the electorate who packed the Council Chambers, As the Republicans councilmen sat back in disgust, murmuring to each other and protesting what they called the "circus" assembled in their sacred chambers, as the Democrats nervously chomped on cigars and pondered the hard reality that now they'd better take some far-out positions or face complete defeat once again next election, it became joyously clear that Ann Arbor politics will never be the same again.

They said it couldn't be done, and our victory sure didn't happen by any kind of magic. It came about as a result of the intense, driving work and dedication of the Human Rights Party, as well as all the members of the People's Campaign who worked against all kinds of obstacles, including the University of Michigan, to get the word out that This time people really should get out.

And get out the vote we did. This last election day in Ann Arbor was like none ever before, as thousands and thousands of freeks overflowed the polls, sometimes waiting in line an hour or two just to walk in, pull the curtain closed and vote for the candidate of their choice.

Driving around town on Monday you'd keep running across the 35 HRP votemobiles that spent all day giving people rides from homes and dorms to the polls. Four of the cars kept in touch with HRP central with 2-way radios, darting to different polling places that needed more workers or were having some difficulty, like at Jones School in the first ward, where hundreds of people were harassed by Democratic and Republican poll-watchers who started challenging "student-looking types" credentials at one point during the day. The HRP had the help of 300 organized volunteers, who worked all-day election day watching over the polling places, leafletting and rapping with the people as they carne to vote. Neither of the two Property Parties have ever mounted this kind of effort or gotten so many people involved in a city council election. Now all the energy and people that went into winning can go into transforming the city, exposing the established parties past record in government as equally low level.

Monday night after the polls closed at 8 the HRP office on Thayer swelled with people coming back from voting or from working at one of the precincts. Standing around and waiting for the results, people were nervous and excited, and as the first news came in with strong showings for Nancy and Jerry and unexpectedly good results for the 3 other candidates, the HRP office became the scene of a frenzied election celebration, complete with joints, kegs of beer, and periodic screams and jumps for joy as the results were phoned in from city hall. And many of HRP's older supporters joined in the partying.

The final election returns show that the Democrats didn't win even one seat, reacting to Jerry's victory in the usually Democratic First Ward as a total surprise. Genie Plamondon pulled in 22% of the Third Ward vote, which isn't mostly young voters, doing far better than anyone (outside a few courageous HRPers) had predicted. David Black and Nancy Romer Burghardy, who received almost no money for campaigning and could afford to put out only one leaflet (as opposed to 5 or 6 for the other HRP candidates), pulled in relatively high totals for the amount of work they were able to put into their campaigns.

Reaction from the established politicians was anguished and angry. Mayor Hars spoke to reporters the next day and explained that "some people look upon this Human Rights Party victory as the second coming of Christ. Well, these people are just mortals." Bob went on to explain how once Nancy and Jerry were faced with the "harsh realities" of city government, they'd end up just like the Democrats. The Republicans were outraged, sent into a whirling irrational frenzy as the crew of bankers and businessmen lamented the city's future and their rapidly diminishing grasp of control over the population. Torn Burnham, candidate from the second ward and the Republican's boy-wonder-student liberal hopeful was naive enough to blame his defeat on what he called the "deceitful" campaign conducted against him by the HRP in the Michigan Daily.

The Ann Arbor News on the day after the election came out urging Ann Arbor residents who were thinking of leaving the city to "Stay and fight," but also admitted that "if you believe in the democratic system, you have to believe that it was the people speaking."

Phew! We've won, but the real work of entering the government, learning how it operates and exposing it has just begun. Nancy and Jerry are going out and learn exactly what needs to be done, but it's going to be a long and slow process as they plod through the bureaucracy and bullshit. Already they've met with Police Chief Krasny, City Administrator Guy Larcom, and others who will now be subject to the close scrutiny from the community which they deserve. At he meeting with Krasny the HRPers questioned him about the Police budget, how much of it goes to enforce antiquated, unnecessary and vicious laws, asked about the files police keep on political activists, and generally began the process of keeping the police in line. Krasny called the meeting "rather congenial," and we all certainly hope things stay that way until a new police chief can be chosen to head the department.

There's a lot that can be done right away; of course a great deal of it is up to the Democrats. Will they unite with the HRP and help pass the legislation people need or will they side with the Republicans and expose themselves once again. It takes six votes to get anything done, and neither the Republicans nor the Democrats have the needed number of votes by themselves. We'll see how things go starting right away, as Nancy and Jerry get to work. Immediate plans are for a new city marijuana ordinance that would make possession of the holy weed a $.25 fine within the city limits, an ordinance expressly stopping the city or its agents (like the police) from aiding in any strike-breaking activities, immediate abolition of all laws against homosexuality or sexual practices of any kind, and other needed changes.

None of these things will come easily or without a struggle, but now we can start to force the city to do what's needed and at the same time expose the morass of rules, regulations, bureaucracy and corruption as it gets in our way and slows us down. Nancy and Jerry can help make sure now that the people's programs, the free concerts in the park, and the whole range of alternatives to the madness that the Tribal Council is creating, can grow with much less interference from the powers that be then ever before. And that's what's most important, because the Tribal Council IS THESOLUTION.

We are now a more powerful force than ever before to be dealt with. Already there is talk in newspaper editorials and around of taking away the student's right to vote where they go to school; we've already seen to what lengths the University and the money interests it fronts for will go to stop us from VOTING, from FOLLOWING THE LAW, but we ain't seen nothing yet as these creeps lose more and more of their power. The only way this is going to work is if we work on it together. Everyone's invited to the regular community mass meetings held at the human Rights Party office, where you can come and help make policy and set the next moves. Nancy and Jerry are your representatives, and they want to know what you need. The HRP phone number is 761-6650. Now is the crucial time, as we work on changing as much as we can while people all over the country watch to see what will happen - if we do our job right we can allay the fears of people who don't understand us yet, win many of them over, and get a lot more votes come next April, when we could win two of three more seats!

And this is only the beginning. There's an election for the Ann Arbor School Board coming up this June, next November we can take on Democrat Doug Harvey and possibly finally restrain the Washtenaw County Sheriff's Department, as well as possibly capture a seat in the State Legislature. The rising tide of the people cannot be stopped, but it needs YOU. Even with the tremendous turnout last week still only an estimated 60% of those eligible actually got out to vote, and the HRP figures that there's still thousands of 18-20 year olds who haven't even registered yet. So do it while you still can, and come check out the City Council meetings every Monday night at 7:30. ALL POWER TO THE PEOPLE! LET'S ALL WORK TOGETHER AND CHANGE THINGS AROUND. . .

Steve Nissen, HRP Campaign Manager, and Linda Ross, Campaign Manager for Genie Plamondon, celebrate the election returns at the HRP office on election night. Not everyone reacted so joyously, for example the two Republican councilmen pictured below...